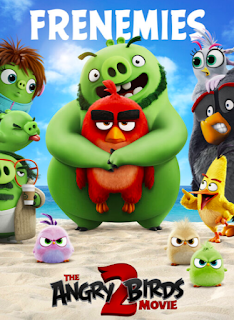 FamilyFaire: The Angry Birds 2 (2019) PG When a new threat appears, The piggies, led by Pig King Leonard (Bill Hader) and the Birds, led by Red (Jason Sudeikis) decide to join forces to combat the icy island let by Zeta (Leslie Jones) an eagle who wants warmer conditions for her eagles. I absolutely hated the first Angry Birds film, calling it both unfunny and annoying. The second film is a slight improvement but that is very faint praise. There was only one sequence that I thought was funny and yes, it takes place in a bathroom as one of the characters is going to the bathroom. Little kids may enjoy this film as there are lots of different characters in bright colors and there is quite of bit of action but once again, this was a film that I looked at my watch, thinking it was almost over and we still had thirty minutes to go.   My Rating: Cable    The Angry Birds 2 Website

My View:  Good Boys (2019) R Three sixth grade boys (Brady Noon, Jacob Tremblay, Keith L. Williams) ditch school and go on an adventure while unknowingly carrying stolen drugs. Their mission is to get back home in time for a long-awaited party. Let me warn you right away, do not take the kids to see this film as it is produced by Seth Rogan and is raunchy as heck. I swear the Jacob Tremblay character uses the F word more than some hard character from an R rated film about a drug lord. Having said that, this film is incredibly funny and at times touching. This is a film about friendship and how you and your buddies are willing to do just about anything to help each other out. The running gag throughout the film, is the boys don’t quite have the experience to know what they have gotten into, they are way over their heads but they just don’t know it, so they keep going with a determination that is just so funny. There is an action sequence that takes place in a frat house that is so well done, it could be in a Dwayne Johnson action movie. This is one of those films that you will have a blast watching.   My Rating: Full Price     Bood Boys Website

My View: Blinded by the Light   (2019) PG-13   In 1987 Britain, the economy is in ruins, unemployment is growing and so are racial tensions. Javed (Viveik Kaira), is a teenager who is just trying to survive his high school days and the hard ways laid down by is Pakistani father (Kulvinder Ghir). Javed world is changed when he discovers the music of Bruce Springsteen, giving Javed a different way to see and deal with his world. Let me start off this review with a bit of a disclaimer, I am a huge Springsteen fan, having seen the full band twice and then I saw him do an acoustic show of all his hits. So I may be a little biased when I say that I thought this film was brilliantly done. Much like the Sing Street movie from a few years ago, there is a lot of singing and dancing done by the cast, the big difference is they are all Springsteen songs. This is one of those movies that I could watch over and over because it is so joyous in its presentation of Javed being saved from working in a factory to doing something he loves, writing. Kaira is perfect in the role and is so likable on the screen that you can’t help root for him to succeed. Even if you are just a mild Springsteen fan, you will enjoy this film from beginning to end.  My Rating: Full Price    Blinded by the Light Website

My View: Where’d You Go, Bernadette? (2019) PG-13  Bernadette (Cate Blanchett) quit a promising career to raise her daughter (Emma Nelson) along with her loving husband (Billy Crudup). But Bernadette can’t be held down for long and goes on an epic adventure that will jump-start her life and lead her to happiness. Despite a strong performance by Cate Blanchett in a very unlikeable role as the difficult to deal with Bernadette and a nice comic relief performance by Kristen Wiig and the put upon next-door neighbor, I found the film very hit and miss. I think the major problem is that until the end of the film, you find that you don’t like Bernadette very much, even when she is dealing with some really stupid people. The film takes way too long to get going, although I did enjoy the last 1/3 of the film, once the plot starts moving forward. I think the film spent way too much time setting up the story and way too little resolving it.   My Rating: Bargain Matinee    Where'd You Go, Bernadette? Website

Indiefest: Luce (2019) R A married couple (Naomi Watts, Tim Roth) are forced to deal with their adopted son (Kelvin Harrison Jr.), who is from war-torn Eritrea when a devoted high school teacher (Octavia Spencer) discovers an alarming fact about their son. Appearances can be deceiving, especially when you don’t want to see what people are really like once they let their guard down. This is a fascinating film about parents who think they have raised the perfect child and then slowly realize that couldn’t be further from the truth. Luce looks to be the perfect son/student but he has a hidden past that is probably affecting him to this day. Kelvin Harrison Jr. gives one of those performances that make you excited to see him in other roles, because he has this one down. He gives Luce a vibe that isn’t always what his character projects on the outside. Harrison Jr. shows us a young man how isn’t above using every trick in the book to get what he wants. My guess he will be in the mix for the breakthrough performer when the end of the year critic ballots go out. This is not an easy film to watch and you will squirm in your seat several times during the film but it’s well worth it to see Harrison Jr. give an outstanding performance.  My Rating: Full Price   Luce Website 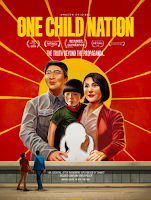 Indiefest: One Child Nation (2019) R   A look at the brutal ramifications of China’s policy that families could only have one child per family. Parents and their children’s lives were shattered by the policy for years. In the 1970s the government of China was worried that if unchecked, China’s population would explode and there would be wild placed starvation. So the government mandated that each family could only have one child. If you did have a second child the government would seize the child and monetarily fine the family. If the family refused, their house might be destroyed and their land taken away. This is a heartbreaking film about the damage to the families that were affected by this law. What hit me the hardest was interviews with families that had to give away a child (that they would never see again) and they all remark that they had no choice but give up the child. The film also exposes that the government made money off the children they took away, selling the children as ‘orphans’ for ten of thousands of dollars to foreign families, especially families from the U.S. This is an extremely well-made documentary about a dark time in China’s history. Be warned, when you watch this film, you will need some tissues to wipe the tears away.   My Rating: Full Price    One Child Nation Website

My View: 47 Meters Down: Uncaged (2019)  PG-13  Four teen girls (Sistine Rose Stallone, Corinne Fox, Brianne Tju, Sophie Nelisse) decide to dive into a ruined underwater city. They go into the ruins too far and encounter a great white that has adapted to the darkness of the ruins. Now they are diving for their lives. The first third of this film feels clunky and predictable. Where this film succeeds is when the teens dive into the ruins, then the tension builds and becomes almost unbearable for the last third of the film. I just wish they had gotten to the ruins much sooner in the film. There are a few ‘jump out of the dark’ scares but the rest of the film is about the teens being hunted by a killing machine. It’s not a great film but it still is a lot of fun to watch. I will admit at one point I pulled up my legs to try and help one of the teens avoid a shark bite.   My Rating: Bargain Matinee    47 Meters Down Website

Forgotten Film: Darkman (1990) R      A brilliant scientist named Peyton Westlake (Liam Neeson) has discovered a way to produce synthetic skin for burn victims. There is a flaw in the discovery, the skin can only last 100 minutes if exposed to light. Sent by a mob boss, a henchman blows up Westlake, leaving Peyton for dead. Peyton begins using the synthetic skin to take the form of others (for only 100 minutes) and is out for revenge and to save his girlfriend Julie (Frances McDormand) who unknowingly works for the mob boss that put out the hit on Westlake. I love Neeson in the part, who shows his two sides; one carrying for his girlfriend and one who is determined to get revenge and make it as painful as possible. The action sequences are well done. The movie is enhanced by an incredible score by Danny Elfman that adds to the mood of the film.    My Rating: Bargain Matinee    Darkman Info

Weird Credits: From the credits of Blinded by the Light: Standby Greens

Email ThisBlogThis!Share to TwitterShare to FacebookShare to Pinterest
Labels: 47 Meters Down, Blinded by the light, Good Boys, Luce, One Child Nation, The Angry Birds Movie 2, Where'd You Go Bernadette