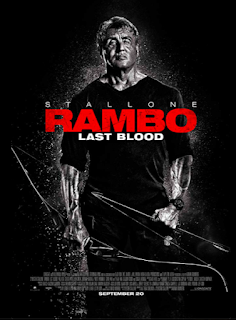 My View: Rambo: Last Blood  (2019)  R  John Rambo (Sylvester Stallone has been living peacefully and staying out of the man’s gaze. When a friend’s daughter is kidnapped, Rambo crosses the U.S.-Mexico border to bring her back home, but he will find himself up against one of Mexico’s biggest cartels. The cartel has no idea who they are dealing with, but they will soon find out. This reminds me of the days when I would walk into my local video rental store and I would find a straight to video movie that starred an action star that had once been big but now was an afterthought. The big difference between this movie and those has-been pictures of the past is none of those old VHS specials would be this gory. The level of just horrible violence is shocking in this film. Only the die-hard Stallone fans will enjoy this badly written and over the top bad guys filled film. And just so you get the meaning, we get to see the border wall twice right before Rambo kills about 100 bad guys.   My Rating: Cable    Rambo: Last Blood Website

My View: Ad Astra (2019) PG-13  Astronaut Roy McBride (Brad Pitt) undergoes a mission into deep space to find out the truth about what happened to his father (Tommy Lee Jones) who went on a mission 30 years earlier and apparently is still alive and may have a weapon that can destroy half the solar system. Some critics are going to go nuts over this film, but I found that while the film is incredible looking, reminiscent of 2001: A Space Odyssey, I found the film void of almost any storyline. After the film finished, I had more questions than answers, making me feel that I had seen an uncompleted film, that the writer and director were going to keep working on the film until it made sense. Howeverr, alas, all you get is this mess of a film.  My Rating: Bargain Matinee   Ad Astra Website

My View: Downton Abbey (2019) PG  The continuing story of the Crawley family, owners of a vast estate in the English countryside in the early 20th century. The estate is thrown into a frenzy when the family learns that King George V will be coming to visit. I have never seen an episode of the BBC/PBS television series of the same name and was worried that I wouldn’t be able to keep up with the storyline but after about fifteen minutes into the film, I pretty much figured out the cast of characters and their relationships with each other. After that first section, I really enjoyed this film about a family dealing not only with a royal visit but all the politics and relationships that a house that size has going on. I would be remiss if I didn't mention the performance of Dame Maggie Smith, who as the feisty Violet, Dowager Countess of Grantham, is brilliant, funny, bringing a much needed comic relief everything she says a sarcastic line.  I thoroughly enjoyed this film, and I think the fans of the show are going to think this film is everything they could want in a film about their beloved series.  My Rating: Full Price    Downton Abbey Website

Indiefest: Aquarela (2018)   Documentary where the main protagonist is water. Water and ice are captured on screen from around the world, showing just how powerful water is. This is a gorgeous looking film but I got bored with the film after the first twenty minutes. How many shots of water or icebergs can you watch for minutes at a time? There isn’t any narration or titles for the film, so often you have no idea what you are looking at. After an opening sequence that piqued my interest, the rest of the film was an on-slot of shot after shot of water doing what water does, move on, just like I wanted to.   My Rating: Bargain Matinee    Aquarela Website

Indiefest: Ms. Purple (2019)   A young woman, Kaise (Tiffany Chu) works as a karaoke hostess in Koreatown. She reconnects with her estranged brother (Teddy Lee) when their father is on his deathbed. This is a story about a family that is torn apart not only from the past but also the present. Both siblings are trying to doing right by their father, but it’s not the life that either one envisioned for themselves. Kaise is a woman who is willing to sell her body and soul to provide for her dying father. Her brother, Carey, can’t seem to do the right thing, even when he is trying to. This is a sad and gut-wrenching film about two people trying to come to terms with their lives while being tortured seeing their father waste away in silence.   My Rating: Full Price    Ms. Purple Website

Forgotten Film: Anatomy of a Murder (1959)   A small-town lawyer (Jimmy Stewart) defends a Lieutenant in the army (Ben Gazzara) accused of murdering a man that he claims raped his wife (Lee Remick). The movie is worth watching if just for the opening credits and the incredible score by jazz legend Duke Ellington. Stewart is perfect as the lawyer who doesn't think he is up for the job and Remick is dazzling as the wife that maybe the key to the whole mystery.  This Otto Preminger directed film will keep you guessing until the end to see if the Lieutenant is guilty of committing out and out murder. My Rating: I Would Pay to See it Again   Anatomy of a Murder Info

Weird Credits: From the credits of Downton Abbey: Ballroom Technician

Coming Soon to a Theatre Near You: The Irishman (2019) A mob hitman recalls his involvement in the disappearance of Teamster leader Jimmy Hoffa. Are you ready for a mobster film directed by Martin Scorsese that lasts 210 minutes and stars Robert De Niro, Anna Paquin, Al Pacino, and Jesse Plemons?     The Irishman Website