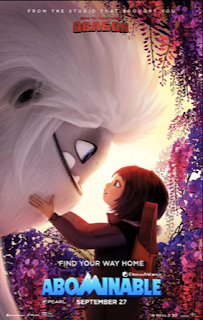 FamilyFaire: Abominable (2019) PG   Yi (voiced by Chloe Bennet), a young girl, finds a friendly Yeti that longs to go back to his mountain. Yi and two other friends make it their mission to help ‘Everest’ return to its homeland. The gang will have to avoid a wealthy man named Burnish (Eddie Izzard) who wants to put Everest in his collection. While very predictable and at times a little slow, the film is warm look at friendship and how those friends will try their best to make their friends dreams come true. This is a sweet film that families will enjoy and kids will love the action sequences. Sure the plot is a little too paint by numbers kids film, but Everest and his buddies may just make you forget that.   My Rating: Bargain Matinee    Abominable Website

My View: Judy (2019) PG-13   A penniless and considered washed-up Judy Garland (Renee Zellweger) arrives in London to restart her career with a series of sold-out concerts. She must deal with the demons of the past while battling her ex-husband over the custody of her children. The film is let down a bit by its storyline that centers on Judy’s self-destructive behavior but it’s the performance of Renne Zellweger, who stunningly brings Judy Garland back to life with an incredible performance. Zellweger is brilliant in the role and her singing a ton of Judy’s hallmark songs brings this film to life. I loved the flashbacks to when Judy (played by Darci Shaw) is in the middle of filming The Wizard of Oz. We see that the young Judy just wanted to spend a day or two being a normal kid but the Hollywood system wouldn’t let her. I just wish there had been a few more flashbacks in the last third of the film when Judy’s downward spiral becomes almost too much to watch.   My Rating: Full Price    Judy Website

In Case You Missed It (A Film Just Released on DVD / Blu-ray): Yesterday (2019) PG-13   A musician, Jack(Himesh Patel) who realizes he’s the only person to remember The Beatles. He then starts performing their songs and becomes a big star. Patel has a fine voice and what I like about this film is Patel puts a new take on some of the Beatles songs. His version of Help near the end of the film is a perfect example of this; it’s full of anger and angst. I loved Lily James, who plays Ellie, Jack’s manager, who at times is the only one that believes that he can succeed as a musician. I enjoyed the music in the film, seventeen songs of The Beatles are sung, showing just how prolific they were. This is a sweet film that doesn’t always work. The film never quite finds its footing and I hated the ending. You get the feeling that screenwriter Richard Curtis didn’t quite know how to get his characters out of the predicament they find themselves at the end of the film.   My Rating: Bargain Matinee     Yesterday Website

In Memory of Ed Wood (A Movie I've Only Seen in Trailers But Just Looks Like a Bad Idea):  Playing with Fire (2019)   A crew of wild-land firefighters, led by tough as nails Jake Carson (John Cena) meet their match when they rescue a trio of rambunctious children. Why does every action star feel the need to make a movie where they get bested by children that ultimately teach the action hero a lesson on how to let people into your heart?  Playing with Fire Info

Forgotten Film:   The Big Country (1958)   A New Englander (Gregory Peck) arrives in the old west, where he becomes embroiled in a feud between two families who both claim a piece of land. This film is one of those big, larger than life films with a huge all-star cast that only someone like William Wyler could direct. Two reasons to see this film, Burl Ives, who won a Supporting Actor Oscar for his performance and the amazing shot after shot of the ranch lands in the film. While a good movie, it’s more known for how Wyler pissed off almost the whole cast, including Peck who would never talk to Wyler again after making the film.   My Rating: Full Price    The Big Country Info

Weird Credits: From the credits of Judy: Immigration Consultant

Coming Soon to a Theatre Near You:  Doctor Sleep (2019) R   Years after the events of The Shining, a now-adult Dan Torrance (Ewan McGregor) meets a young girl (Emily Alyn Lind) who has similar powers as his. Dan takes the girl under his wing and tries to protect her from a cult known as The True Knot. Their mission is to find and prey on children with powers so that their members can remain immortal. The words ‘based on a novel by Stephen King’ is enough to get me to see this film.    Doctor Sleep Facebook Page 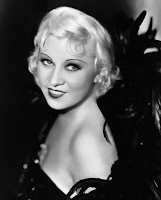