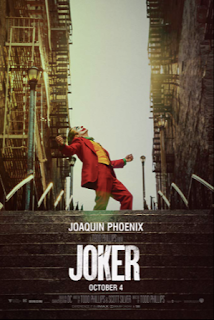 My View:  Joker  (2019) R   The origin story of The Joker, one of Batman’s most evil combatants. Arthur Fleck (Joaquin Phoenix) is a man who just wants to make the world smile but instead, he is a man disregarded and looked down upon by society. No matter how hard Arthur tries he ultimately cannot deny the evil that is lurking deep inside him. Joaquin Phoenix gives an absorbing and spellbinding performance that will probably get him an Oscar nomination, but I just don’t think he will win because he is let down by a film that is too long, takes way to long to set up the Joker character and when the Joker does appear, is not all that threatening from other men and women that have killed on the screen. It is hard to believe that this man, Arthur Fleck, becomes one of the most feared criminals in the DC Universe and a villain that many times almost destroys the mighty Batman. Overall, in spite of Phoenix’s mesmerizing take, I found the film dull and in no way, shocking. This is a film that is going to divide critics, and I am on the side that this film just didn’t work. Note: Unlike a lot of comic book films, this film is not for children and the hard R is warranted for language and very real violence.   My Rating: Bargain Matinee

Indiefest: Always in Season (2019)  Seventeen-year-old Lennon Lacy was found hanging from a swing set in a small rural North Carolina town in 2014. This documentary explores the search by his mother for the truth of how her son died while also exploring the history of lynching in America. This heartbreaking film that shows that the sins of the past are the sins of the present. The film uses this modern-day lynching and others, to highlight that these horrible crimes have a deep-seated history in the South, and that justice still turns a blind eye to its continual happening. This is a tough film to watch and will make you sick to your stomach, but it’s a subject that needs to come out of the past and be dealt with. My Rating: Full Price

Indiefest:   First Love (2019)   A young boxer, Leo (Masataka Kubota) loses a fight he was sure he would win, and this triggers a chain of events that involve drug dealers, and a double-cross. Complicating things is a call girl addict (Sakurako Konishi) that Leo must protect with his life. This film has just about everything that you would want in an action film. There is the Yakuza fighting the Chinese mob, there is a female assassin, a drug deal gone wrong, a one-armed hit man, samurai swords, car chases, and a shoot-out in a warehouse that almost takes a scorecard to keep track of all the participants. On top of all this violence, there is a sweet, gentle romance going on between a woman who has been sold to the mob to settle a debt and a boxer who thinks his life is over. I thoroughly enjoyed this wild ride of a film that has touches of Quentin Tarantino mixed in with classic Japanese mob films.   My Rating: Full Price   First Love Website

In Case You Missed It (A Film Just Released on DVD / Blu-ray):  Spider-Man: Far From Home  (2019)  PG-13  Peter (Tom Holand) just wants to enjoy his school trip to Europe but Nick Fury (Samuel L. Jackson) has other plans for Spider-Man. I loved this movie, especially the comedic tones that this film uses to bring across Peter’s reaction to things. I enjoyed the action sequences and felt that they were fun to watch. What this makes this film is Jake Gyllenhaal as Mysterio, who gives a commanding performance. Be sure to stay through all the credits due to two bonus scenes that set up the next film in the series. My Rating: Full Price

In Memory of Ed Wood (A Movie I've Only Seen in Trailers But Just Looks Like a Bad Idea):  Jexi (2019) R   Phil (Adam Devine) has no friends, a dead-end job and his love life is just wishful dreams. His life changes when he gets a new phone that has an A.I. life coach named Jexi (voiced by Rose Byrne) that helps Phil get his life in order. When things start going good for Phil, he begins ignoring the phone, and that’s when his life becomes a nightmare as the A.I. is determined to keep Phil at all costs. Watching the trailer of this comedy, I didn’t laugh once.

Forgotten Film: Speak (2004) PG-13  Melinda (Kristen Stewart) is a popular high-school student until, at an end-of-summer party, she calls the cops and a number of her fellow students are arrested for under-age drinking. After that, Melinda is ostracized by her fellow students as no one in school will even acknowledge her existence. Melinda decides to stop speaking; to her parents, her teachers and especially, her fellow students. Soon the reason why Melinda called the cops will come out, and it will change everyone’s opinion of her. Stewart gives a compelling performance in her first leading role, and she is more than up for this role. Stewart is aided by Elizabeth Perkins, as Melinda’s mother who desperately wants to help her daughter and Steve Zahn, who as Melinda’s art teacher tries to figure out why Melinda has gone silent. Speak is a film to check out now that we know that Kristan Stewart is more than just that ‘Twilight girl.’  My Rating: Full Price

Coming Soon to a Theatre Near You: Little Monsters (2019) R Dave (Alexander England) decides to accompany his nephew on a school trip, with Dave sets his sights on one of the teachers, Miss Caroline (Lupita Nyong’o). Everything seems normal until a Zombie outbreak happens and now Dave, Caroline and Teddy McGiggle (Josh Gad) must use every resource, including a guitar to ward off the Zombies and save the school children. You had me at Zombies and Oscar winner Lupita Nuong’o. 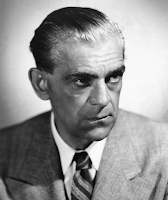