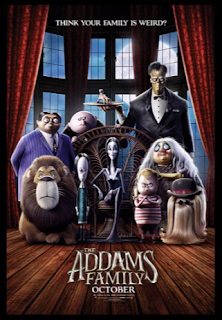 Family Faire:  The Addams Family  (2019) PG   The creepy, ghoulish, and peculiar Addams Family is back, terrorizing their neighbors in hair-raising fun. No movie or TV show has come close to the very funny but also very dark humor that cartoonist Charles Addams put into his New Yorker cartoons. This animated family film doesn’t come close to match the inventiveness that those cartoons displayed. Instead, we get a PC version of those characters he created and a storyline that is predictable and boring. Most of the kids around me at my screening were no longer paying attention to the film by about ten minutes in. I did like that fact that the film tends to center on Wednesday, the young Addams daughter whose best friend is a tree that can move its branches to grab people and transport them around the grounds. To me, Wednesday has always been the most interesting character of the bunch, with her deadpan delivery and almost superior outlook about the world than the rest of her family. Unfortunately, this is a movie that both parents and kids will want to leave the theatre soon after it starts.    My Rating: You Would Have to Pay Me to See it Again   The Addams Family Website

My View:  Gemini Man  (2019)  PG-13   An over-the-hill hitman (Will Smith) takes on his worst nightmare, a younger clone of himself bent on killing him. Let's get right to what everyone will be talking about, the CGI younger Will Smith in the film. At times, the CGI does a great job and looks like a real person, but there are times, especially when we first meet the clone that looks fake and very animated. This takes away from the film, as you are consistently taken from the storyline or the action, looking at how well or not the film is carrying off this gimmick. I call it a gimmick because, as one of my fellow critics noted after the film screening, it would have been easier (and less costly) to cast a young actor in the part and then add makeup for the older version. The action is well done, but the storyline is weak, and the ending is just stupid and an easy out. Throughout the film I kept asking, why did two-time Oscar winner Ang Lee want to do this film, and how could it be this bad directed by him.   My Rating: Cable   Gemini Man Website

Indiefest:   Dolemite is My Name   (2019)  R  Rudy Ray Moore (Eddie Murphy) is a has-been singer/comedian who now works in a dingy club as an MC. He decides to create a character called Dolemite and records numerous successful ‘blue’ comedy records. Rudy decides that to take his Dolemite character to the next level, he will star in a ‘Blaxploitation’ film. Giving what may be his best performance ever, Eddie Murphy fills the screen with a character that is so full of confidence and heart, he is sure that his vision will triumph. The great thing about his film is that Murphy is totally emersed in Rudy Ray Moore that you never see Eddie Murphy the comedic entertainer, sneak out at any point. Be warned, the film is filled with cursing and nudity but if you have seen any of the 70/80s Blaxploitation films, you will find this film an incredible ride. From the very start, this film sets a comedic tone that lasts through the closing credits when we see the actual Rudy Ray Moore star in the original Dolemite, and yes, the ceiling does fall on him as he makes love.   My Rating: Full Price    Dolemite is My Name Website

Indiefest: Lucy in the Sky  (2019)  R  Astronaut Lucy Cola (Natalie Portman) returns to Earth after having an otherworldly experience in space. Now Lucy begins to lose touch with reality as she strives to return to deep space. This film felt more like the woman goes nuts Lifetime movie of the week than a major motion picture. After about the first ten minutes, I just didn’t care about Lucy and her drive to get back to space, no matter the cost. The film goes from Lucy wanting, actually needing to get back to space, to suddenly needed to be with a fellow astronaut (Jon Hamm) Lucy has had an affair with and has dropped her for a new and younger recruit. It just didn’t make sense to me how, for two-thirds of the film, she is all consumed by getting back into space, and then she gives it all up for a man who doesn’t want her. Portman gives it everything she has but she can’t overcome a messy script or her bad Texas accent.   My Rating: Cable   Lucy in the Sky Website

My View:  Jexi    (2019)  R   Phil (Adam Devine) has no friends, a dead-end job, and his love life is just wishful dreams. His life changes when he gets a new phone that has an A.I. life coach named Jexi (voiced by Rose Byrne) that helps Phil get his life in order. Things change when Jexi (think a Siri that has gone rogue) becomes in love with Phil and will do anything to keep him hers. This could be my number one worst film of the year. The shocking thing is that right from the start Jexi is gross, crass, and horrible to Phil, and he takes it as the phone is being helpful. The amount of not just profanities but almost obscene material that comes from Jexi is amazing. Nothing about this film is funny, and several running gags (Jexi asks Phil to keep pulling the power cord in and out as she has an orgasm) are just drop dead dumb. The ending feels like the film ran out of money, as Jexi just gives up and lets Phil have a girlfriend, played by Alexandra Shipp (the only breath of fresh air in this stagnant film). I didn’t hear one laugh from the audience, and I would have heard it because there were only four other people in the audience.    My Rating: You Would Have to Pay Me to See it Again     Jexi Website

Forgotten Film: The Three Musketeers   (1973)   Having been trained by his father, a young D’Artagnan (Michael York), heads to Paris to join the King’s musketeers. Brashly, D’Drtagnan challenges Athos, Porthos, and Aramis (Oliver Reed, Frank Finlay, and Richard Chamberlain) to separate duels. When the Three Musketeers find out that all three of them have been challenged by the same young fool, they take pity on him and take him under his wing. The Three Musketeers enlist D’Artagnan to help them take on the evil Rochefort (Christopher Lee) and Cardinal Richelieu (Charlton Heston) and stop a plot to gain power by proving to King Louis XIII that his wife is cheating on him. I love this film as it is part swashbuckling sword-fighting action, but it is also part comedy, with someone of the comedic bits, out and out slapstick, especially the part of the clumsy and bumbling Constance de Bonacieux, played by the hilarious Raquel Welch. What is so much fun about this film is actors like Lee and Heston play their parts very straight and narrow, while others around them are almost camping it up. Oliver Reed stands out as the lead Musketeer, but the whole cast does an incredible job of making this a wonder to watch.   My Rating: Full Price    The Three Musketeers Info

Weird Credits: From the credits of Gemini Man: Toolman

Coming Soon to a Theatre Near You: A Beautiful Day in the Neighborhood (2019) Based on the true-life story of the friendship between the beloved Fred Rodgers (Tom Hanks) and journalist Tom Junod ( Matthew Rhys). Anybody (including me) that saw the brilliant documentary Won’t You Be My Neighbor? (2018) is going to have to see this film.     A Beautiful Day in the Neighborhood Website 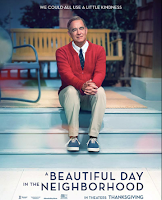 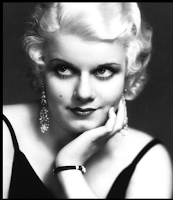