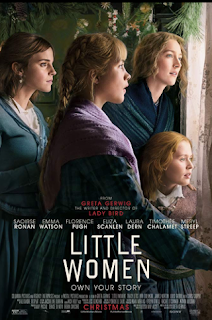 My View: Little Women   (2019) PG    In the aftermath of the American Civil War, the movie explores the lives of the March sisters, Jo (Saoirse Ronan), Meg (Emma Watson), Amy (Florence Pugh) and Beth (Eliza Scanlen), all under the watchful eye of their beloved mother, Marmee (Laura Dern). I am a massive fan of the writer/director of this film Greta Gerwig, both as an actor (Greenberg (2010), Frances Ha (2012), and as a director (Lady Bird (2017), which I thought was one of the best films of 2017. Gerwig has done it again, bringing freshness and light to the Louisa May Alcott story that has been adapted to the screen seven times before. I loved the performances of the cast, especially Saoirse Ronan as, Jo, the young woman who is filled with passion for writing and Florence Pugh, as the self-centered Amy. Ronan brings a fierceness to the role; you can see the determination in her eyes as she wills Jo to succeed where almost everyone, including some in her family, feels that she is battling against windmills. Pugh is delightful as Amy, a young woman who is quite as mature as her fellow sisters, sometimes making decisions based on her heart and not her head. Little Women is a beautiful film, full of heart and occasionally, heartbreak, about growing up and having to face the harsh world, but always knowing that your family is there to fall back on. Take the whole family and enjoy the wonderful world of a group of four sisters experiencing the trials and tribulations of life.   My Rating: I Would Pay to See it Again     Little Women Website

Familyfaire: Spies in Disguise  (2019) PG   The world’s best spy, Lance Sterling (voiced by Will Smith), is turned into a pigeon; he must join forces with a low-level inventor, Walter (voiced by Tom Holland), to save the world. I was surprised by how much I enjoyed this animated feature. A new take on the super spy saving the world genre, this time with a young inventor who thinks there is a better way to defeat the bad guys, with non-violent gadgets. Will Smith is perfect as Sterling, Lance Sterling, a spy who is used to saving the world daily, all the time with an ego to match. Lance is a lone wolf, but when he is set up by the evil Killian (voiced by Ben Mendelsohn) and Lance is forced to team up with Walter, who turns Lance into the ultimate disguise, a pigeon. The animation gives off a cool James Bond-like vibe, and the action is almost nonstop, with quite a few explosions and car chase scenes spread throughout the film. The bit younger crowd may be a bit bored, but the 6-12-year-olds will have a great time going on an adventure to save the world with Walter and his spy partner, Lance the pigeon.    My Rating: Full Price     Spies in Disguise Website

My View: Uncut Gems (2019) R   Howard (Adam Sandler) thinks his life is about to change due to the delivery of an uncut gem that could be worth millions. Howard is all about taking chances, and he starts a series of high-stakes bets that he could win big on or also lose everything. Adam Sandler is an actor that, most of the time, pisses me off. My problem with Sandler is not because of his continual compulsion to make incredibly crappy films with his friends, like Grown Ups (2010), That’s My Boy (2012) and one of the worst movies I have ever seen, Jack and Jill (2011). No, it’s not that, it’s that Sandler can be an excellent, even great actor when he chooses the right material. The list is small but notable with outstanding work in films such as Punch-Drunk Love (2002), Reign Over Me (2007) and Spanglish (2004), where Sandler brings a quiet force to make an ordinary film worthy of watching. Add to the list Uncut Gems, where Sandler plays a man you probably won’t like or maybe even not root for, going so far as to hope that he fails. Still, you can’t deny that Sandler fills the screen with a magical, almost hypnotic performance as a man who is desperate to keep pushing his luck, even if it means he has to beat impossible odds. Uncut Gems is not a film that you will be able to sit back and enjoy, as Sandler and the directors of the film, Benny and Josh Safdie, take you on a journey of the high’s and low’s of a gambler. It’s like taking a ride on a roller coaster but one that rarely takes an uphill break, as Howard’s life quickly moves down from one get rich scheme to another. I loved the cast, including Kevin Garnett, the NBA all-star who plays himself, Julia Fox, who plays Howard’s combative girlfriend and Idina Menzel as Howard’s long-suffering ex-wife, who has seen Howard’s life on the edge in close-up. After seeing this film, you may need to take a few minutes to gather your thoughts and your senses before exiting the theatre.   My Rating: I Would Pay to See it Again     Uncut Gems Website

In Case You Missed It (A Film Just Released on DVD / Blu-ray): Abominable (2019) PG   Yi (voiced by Chloe Bennet), a young girl, finds a friendly Yeti that longs to go back to his mountain. Yi and two other friends make it their mission to help ‘Everest’ return to its homeland. The gang will have to avoid a wealthy man named Burnish (Eddie Izzard) who wants to put Everest in his collection. While very predictable and at times a little slow, the film is a warm look at friendship and how those friends will try their best to make their friend's dreams come true. Abominable is a sweet film that families will enjoy, and kids will love the action sequences. Sure the plot is a little too paint by numbers kids film, but Everest and his buddies may make you forget that.   My Rating: Bargain Matinee    Abominable Website

In Memory of Ed Wood (A Movie I've Only Seen in Trailers But Just Looks Like a Bad Idea): Dolittle (2020) PG   Seven years ago, the famed doctor and veterinarian of Victorian England, Dr. John Dolittle (Robert Downey Jr.) lost his wife and has been sequestered behind the walls of Dolittle Manor with his menagerie of animals for his only company. When Queen Victoria (Jessie Buckley) falls ill, Dr. Dolittle sets out on an epic adventure to find a cure. Just watch the trailer and see if you want Downey to talk to anything, including animals in this film.  Hollywood, quit remaking movies that were bad to begin with. Did I mention the animals talk?    Dolittle Website

Forgotten Film: Children of a Lesser God (1986) R   James (William Hurt) has taught at some of the best institutions in the country but is always looking for a new challenge. James begins teaching at a school for the deaf and quickly notices a young cleaning woman named Sarah (Marlee Matlin), who is deaf, and learning that she has been at the school since she was five. Sarah chooses not to speak, haunted by her childhood, especially her relationship with her mother, who she has not seen in eight years. They begin a slow ride to romance as they learn about each other, and James will soon learn that Sarah does not speak because it allows her to live her life in solitude. As they fall in love, will the divide between the world of the hearing and the deaf be too much for their devotion to endure? The reason to see this film is the Oscar-winning performance of Matlin, as the headstrong, combative and angry Sarah, a woman who doesn’t want to enter into the land of speech, happy to live her life on her terms. It is a moving and beautiful performance, filled with fear, fear of the unknown, and the fear that if she lets someone in, she will get hurt again.   My Rating: Full Price     Children of a Lesser God Info

Weird Credits: From the credits of Spies in Disguise:  Fur Supervisor

Coming Soon to a Theatre Near You: A Quiet Place Part II (2020)   After escaping from their home, now the family (Emily Blunt, Cillian Murphy, Noah Jupe ) must go into the outside world and soon realize that the world is far more dangerous than they ever experienced or imagined.     A Quiet Place Part II Facebook Page 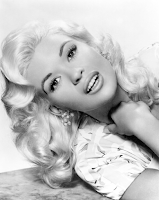