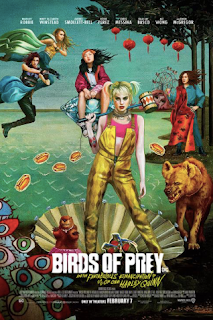 My View: Birds of Prey and the Fantabulous Emancipation of One Harley Quinn (2020) R   After breaking up with the Joker, Harley Quinn (Margot Robbie) joins up with Huntress (Mary Elizabeth Winstead), Black Canary (Jurnee Smollett-Bell) and Renee Montoya (Rosie Perez) to take on Roman Sionis (Ewan McGregor) to save a young girl named Cass (Ella Jay Basco). After the disappointing Suicide Squad, I had meager expectations going into this film, but I am happy to reveal that this film is a blast to watch. Margot Robbie dominates the screen as she plays Harley, who is trying to get over her breakup with The Joker. Robbie is having a great time playing this nutty character, and she gives the part her all. The humor in the film is laugh out loud funny, and the action sequences are flat out amazing. I loved the cast, especially Mary Elizabeth Winstead, as Huntress, a woman with quite a chip on her shoulder along with an inferiority complex and Ewan McGregor as the wacky Roman Sionis, a man who when crossed delights in cutting off peoples faces. I hope this film is a big success, and they make a couple of sequels, as Robbie pitched to the studio executives that this film should be part of a trilogy. While it's pretty small, there is a bonus scene at the end of all the credits that is a fun end to the film.    My Rating: Full Price    Birds of Prey Website

Indiefest: The Cave (2019) PG-13   Documentary about a group of doctors who work in a network of secret tunnels under the city of Ghouta, near Damascus, as the area is being bombed continually by government and Russian fighter jets and missiles. The film starts with one of the greatest openings of a documentary that I have ever seen, a visual that is both horrifying and impressive. The film centers on a 30-year-old female pediatrician, Dr. Amani, who has volunteered to stay behind and tend to the sick and hurt as best as she and her fellow doctors can. The film is heartbreaking as innocent people, under horrible conditions attempt to survive an unforgiving onslaught. Dr. Amani is a caring person who we see looks for those little victories, such as bringing a baby back to life or enjoying a spoonful of overcooked rice, to allow her to continue. Not only does Dr. Amani have to deal with the horrible conditions but very often she is confronted with men, that due to their beliefs feel that women should be not working but taking care of their children, refuse to believe that she can be someone whose skill and knowledge can be trusted. The Cave is truly deserving of its Academy Award nomination, you cannot watch this fantastic film without marveling at the bravery of the people, and especially Dr. Amani, that are just trying to survive for another day in 'The Cave.'   My Rating: I Would Pay to See it Again       The Cave Website

In Case You Missed It (A Film Just Released on DVD / Blu-ray):  Stephen King’s Doctor Sleep (2019)  R    Years after the events of The Shining, a now-adult Dan Torrance (Ewan McGregor) meets a young girl, Abra (Emily Alyn Lind), who has similar powers like his. Dan takes the girl under his wing and tries to protect her from a cult known as The True Knot. Their mission is to find and prey on children with powers so that their members can remain immortal. I haven’t read the book, so I don’t know how closely the movie follows the King storyline, but I think most fans of the first film will enjoy this movie that continues the story of Danny. The film effectively uses actors who look like the characters in the first film in a series of flashbacks that Danny keeps revisiting. I appreciated that the filmmakers took this route instead of trying to CGI the original actors into the film. While I never really got scared, I did enjoy the tension that the movie kept building as Danny and Abra try to defeat The True Knot. I don’t know if this film will be considered up there with The Shining, but it certainly does a great job of filling in the story on what happened after Danny’s dad died.   My Rating: Full Price     Doctor Sleep Website

In Memory of Ed Wood (A Movie I've Only Seen in Trailers But Just Looks Like a Bad Idea):  First Lady   (2020) PG    A woman (Nancy Stafford), not married to the President (Corbin Bernsen) runs for the title of First Lady. I have watched the trailer for this film a couple of times, and I have no idea what the plot of this film is. In fact, I have no clue if this takes place in America or some alternate world. All I know is that this film looks like it was done with the cast of the 1st Baptist Church community players.      First Lady Website

Forgotten Film: Experiment in Terror (1962) Kelly (Lee Remick) is a San Francisco bank teller who comes home one night and is assaulted by a man who tells her she will follow his instructions to steal from her bank or he will kill her sister. Kelly enlists the aid of FBI agent (Glen Ford) to trap the blackmailer, but he is seemingly one step ahead of them at all times. Remick is perfect in the role, making us want her to survive and somehow find the man responsible. Experiment in Terror is an exciting mix of suspense and horror that is gritty in its look and feel. One of the best things about this film is the mix of interesting characters who inhabit the film and the magnificent score that brings the tension to the finale that takes place at Candlestick Park.   My Rating: Full Price     Experiment in Terror Info

Weird Credits: From the credits of Birds of Prey: Roller Derby Instructor

Coming Soon to a Theatre Near You: No Time to Die (2020)  What possibly could be the last performance by Daniel Craig as James Bond, 007 has left active service, but his retirement is short-lived as he goes on the trail of a mysterious villain (Rami Malek) who is armed with a new technology that could be the most dangerous weapon ever developed.     No Time to Die Website 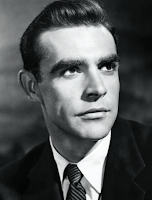