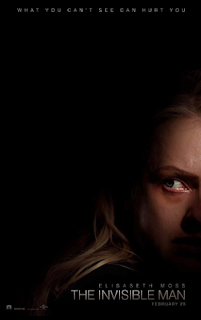 My View: The Invisible Man (2020) R   Cecilia (Elisabeth Moss) is in an abusive relationship with her husband (Oliver Jackson-Cohen), and with the help of her sister (Harriet Dyer), and their childhood friend (Aldis Hodge), she escapes and goes into hiding. When her husband takes his own life, Cecilia is the sole beneficiary of his will, leaving her millions of dollars. Cecilia was always told by her husband that he would hunt her down if she ever left him, even from the grave. Now Cecilia is convinced that her husband has figured out a way to become invisible, making her life a living hell. Over the past couple of months, I have seen some incredibly crappy films that have tried, very unsuccessfully, scare me. I am happy to tell you that finally, we have a suspense film (its not quite a horror film) that, through a smart and skillful script, creates scenes that are filled with tension and fear. In the age of ‘Me Too,’ it is refreshing that a film captures the real horror and panic of a woman being terrorized, and no one will believe her side of the story. What I love about this film is that while most of the characters, including some of Cecilia’s closest friends, feel that she is going nuts, we, the audience know that what Cecilia is experiencing isn’t a figment of her mind, but something that is really happening to her. The film deftly treats Cecilia as a strong woman who has legitimate fears of what her husband is capable of, even if it seems that he is attacking her from beyond his grave. Moss is perfect as the everywoman who is determined to solve what is happening to her, even if she has to do it by herself, powered on by only her wits and will power.   My Rating: Full Price     The Invisible Man Website

Indiefest: Emma. (2020) PG  Emma (Anya Taylor-Joy) is a young, beautiful woman, who much to the delight of her father, Mr. Woodhouse (Bill Nighy), refuses to marry. Instead of matrimony for herself, she feels it is her mission to play matchmaker for her friends and family. Emma’s plans don’t always work out, and Emma may find that love may be just around the corner, whether she wants it or not. Anya Taylor-Joy brightens up the screen in every scene she is in, making it so much fun to watch her character weave her magic with her friend's lives. Emma is a beautiful film to watch, filled with luscious scenery and amazing costumes. The film is a delight for not only your eyes but is filled with very amusing situations as Emma tries to influence everyone she encounters with her ideas about relationships. And, any film that has Bill Nighy as a hypochondriac father who is always on the lookout for a draft that he is convinced is in every corner of his household, is worth the price of admission. This Jane Austin adaptation is a film that the words delightful and enchanting kept coming into my mind as I was watching it.   My Rating: Full Price    Emma. Website

Indiefest: The Traitor (2019) R  The life of Tommaso Buscetta (Pierfrancesco Favino), the ‘boss of two worlds’ who was a high-ranking mafia chief who became an informant and brought down the Sicilian mafia in the 1980s. I go every year to the Cinema Italy Film Festival here in Atlanta and have seen some outstanding Italian mafia films. Unfortunately, this isn’t one of them. In what seems like a vanity project for lead actor Pierfrancesco Favino, the film is a slow, meandering film that seems much longer than its 2 hours and 25-minute length. I found the movie incredibly dull as I didn’t care what happened to any of the characters in the film and never truly understood why, after years of service, did Buscetta turn state’s witness for a crime family that made him a lot of money. The film wants to be a Godfather-like saga, but instead, we get a watered-down movie that has minimal action and a lot of scenes of courtrooms with very little substance or style. The film has won some awards and was up for the Palme d’Or at the 2019 Cannes Film Festival, how? I have no clue. The only thing I know is I never want to see this film again.   My Rating: Cable    The Traitor Website

Indiefest: Beanpole (2019)   In 1945, post World War II Leningrad, two women (Viktoria Miroshnichenko, Vasilisa Perelygina) who bonded after fighting side by side as anti-aircraft gunners, are trying to put their lives back together when a shocking accident brings them closer and seals their fates. I want to warn you that very early in this film, there is a scene that is extremely uncomfortable and painful to watch. I have a feeling some people may leave the theatre after that scene, and it’s probably for the best because this is a film that is full of pain and misery. The film is about two women who have been damaged, both mentally and physically, by the horrors of war. Is the movie worth staying for? I believe so, mostly due to the moving performances of the two leads who are playing two characters that aren’t always likable, but you still want some piece of small happiness to happen in their lives. I was struck by how this film looked, where an occasional splash of color, like a green dress, seems like a tiny miracle to a landscape of cloudy days and old, dirty wallpaper. I don’t know if I will ever forget these characters, two women that try to survive with the help of each other.    My Rating: Full Price    Beanpole Website

Indiefest: Blood on Her Name (2019)   Leigh (Bethany Anne Lind) accidentally kills a man on her property, which Leigh decides to cover up. Leigh’s life becomes unraveled as she struggles to keep her son safe, her livelihood secure, and the deceased’s girlfriend (Elizabeth Rohm) at bay. Blood on Her Name is a hauntingly beautiful southern film noir movie that never feels the need to explain everything as we are thrown into the mix right from the start when we, along with Leigh, discover a dead body in her place of business. In a film where it seems, everyone is guilty of something and has something to hide, it’s hard to determine who to believe, but we do choose to root for Leigh because she may be involved with something dark and seedy, we can see that at her heart, she is a good person. Bethany Anne Lind gives a complex and multilayered performance as Leigh, that propels the film to its gritty finale. Leigh lives in a world where your mistakes will eventually catch up to you, and you hope that those mistakes of the past don’t cost you your life.    My Rating: Full Price   Blood on Her Name Website 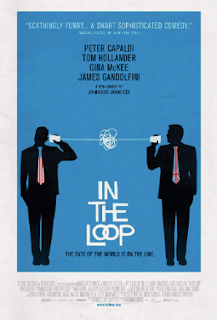 Forgotten Film: In The Loop (2009)   Shot in mock-documentary style, this hilarious film is about the people who work in the upper elections of government and how one badly miscommunicated statement can mushroom into a major problem. The US and Britain are trying to decide if they will declare war against an unnamed Middle Eastern country. I love this film and its quick and witty dialogue. The cast is brilliant with James Gandolfini, as a US general who is anti-war and Peter Capaldi as the communication director of the British Prime Mister stand out in roles that they just go nuts in. Why this film didn’t do well at the box office is beyond me because there are lines spoken that should be part of the banter of anyone who loves to quote movies.    My Rating: I Would Pay to See it Again     In the Loop Info

Weird Credits: From the credits of The Invisible Man: Head of Music Preparation 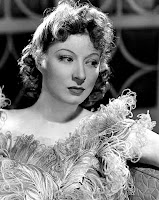 Email ThisBlogThis!Share to TwitterShare to FacebookShare to Pinterest
Labels: Anya Taylor-Hoy, Beanpole, Bill Nighy, Blood on Her Name, Elisabeth Moss, Emma, In the Loop, Jane Austin, The Climb, The Invisible Man, The Traitor