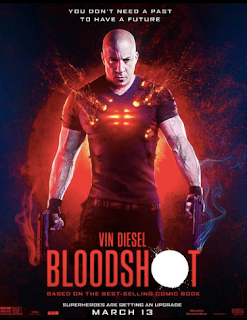 My View: Bloodshot (2020) PG-13   Ray Garrison (Vin Diesel) was an elite soldier who was killed in battle and is brought back to life by an advanced technology that gives Ray the ability of superhuman strength and almost immediate healing. Ray soon learns that what he thinks is real or knows may not be what is happening to him. I am guessing that Vin Diesel had a lot to do with the script since, at least three times, his character’s sexual prowess is brought up. You can also tell by how much Diesel is on the screen (try in almost every shot). I didn’t care about any of the characters in the film, the action sequences are some of the worst I’ve seen in quite a while, and the plot is just plain silly. Elza Gonzalez, as a fellow recipient of the technology (she can breathe air that has been poisoned), gives a woefully acted performance in a cast full of bad acting. The film seemed long, and it is for this type of action film, almost 1 hour and 50 minutes of dull.   My Rating: You Would Have to Pay Me to See it Again     Bloodshot Website

My View: I Still Believe (2020) PG   Jeremy (K.J. Apa) goes off to college, where he meets and falls in love with Melissa (Britt Robertson). As Jeremy’s singing/songwriting career starts to take off, the young couple learns that Melissa has cancer. Their beliefs in God and each other will be challenged in this troubling time. If you don’t like faith-based films, then this film isn’t for you. Based on the real love story between Christian superstar singer Jeremy Camp and his wife, I Still Believe works due to the chemistry of K.J. Apa as Jeremy and Britt Robertson as Melissa. The film is greatly helped by the singing of Apa, who, as TV’s Riverdale fans will attest, can belt out a tune and has the charisma of Camp when he is on the stage performing. Unlike a lot of faith-based films that seemingly fill out their casts with players from the local Baptist church community theatre, I Still Believe is helped by Gary Sinise, who plays Camp’s father. I will warn you that you will need to bring a few tissues along when you see this film.   My Rating: Bargain Matinee    I Still Believe Website

My View: The Hunt (2020) R   Twelve strangers wake up in a clearing and don’t have any idea where they are or how they got there. They are about to find out why they have been chosen, chosen for 'The Hunt.’ I can’t say too much about this film because, right from the start, this wacky and fun gorefest breaks a lot of rules in creating an inventive storyline that I really enjoyed. If you have seen the commercials or the trailer, you may think you know what this film is about, but I am telling you that you are probably wrong. I can tell you that Betty Gilpin, who has shown some spark in the TV series GLOW, is brilliant as a woman who decides that she is going to take charge and survive. My only regret about the film is I wish they had played up the comedy (think absurd plot lines) a bit more. Still, I had such a good time watching this film, that I told one of the critics after the screening, that I wanted it to be longer so I could enjoy the crazy world the film created.    My Rating: Full Price    The Hunt Website

Indiefest: Wendy (2020) PG-13   Retelling of the classic story of Peter Pan, wherein a land that aging and time have become unglued, Wendy (Devin France) must fight to save her family. In undoubtedly one of the biggest disappointments of the 1st quarter of films, two-time Oscar-nominated writer/director Benh Zeitlin, brings us a mess of a movie that felt more like a play put on by a bunch of neighborhood kids, than a film from a filmmaker that brought us the magical Beasts of the Southern Wild. Be warned that this is not a kid's movie, as it tells a muddled story of Wendy and Peter who run around quite a bit but never seem to do anything more than speak dialogue which is painful to hear and a plot that I have no clue what was about. I wanted this film to end ten minutes after I started watching it because I was bored out of my mind. It took eight years for Benh Zeitlin to bring us this movie, maybe he spent too much time with the project and got lost because when I watched it, I was also lost.   My Rating: Cable     Wendy Website

Indiefest: Balloon (2018)   In the summer of 1979, two families plot to escape East Germany to the West by making a homemade hot-air balloon. Based on an incredible true story, this film will keep you on the edge of your seat from start to finish. The film perfectly creates the anxiety and fear that permeated everyone under the Communist rule in East Germany, where you couldn’t trust anyone, and your neighbor might be a snitch for the secret police. The film builds the tension throughout the movie and can’t believe how creative the families were in their attempt to find freedom in the West. I thoroughly enjoyed this film, and you will be on the edge of your seat, rooting for their escape.   My Rating: Full Price     Balloon Website

Indiefest: Hope Gap (2019) PG-13   An adult son (Josh O’Connor) is caught in the middle when after 29 years, Grace (Annette Bening) learns that her husband, Edward (Bill Nighy), is leaving her for another woman. Grace is caught unaware of her husband's unhappiness, and her life comes apart at the seams. Hope Gap is a film that is about two miserable people who spent too much time in their routines, not to notice their unhappiness. Bening has the toughest part in the movie, as you never like Grace. Bening’s character is selfish, a bully, and not very loving, making Bening’s performance stand out from the other two cast members. Bill Nighy isn’t given much to do with the milk-toast, reserved Edward. The film does turn around a bit near the end of the film as each character seems to right themselves and start living again, but it takes quite a while to get to that part, making the film drag a bit.   My Rating: Bargain Matinee     Hope Gap Website

Forgotten Film: Tucker and Dale vs. Evil (2011) R   Tucker and Dale are best friends who are headed to their new vacation cabin (a fixer-upper), but there is something you need to know about them: they are hillbilly rednecks. A bunch of preppy college kids are headed to the same section of the woods near an isolated lake. There is one thing that they all find out once they get to their camps…twenty years ago, five college students mysteriously disappeared there. The two groups encounter each other, and the college kids start dying. The difference between this and other slasher films is this is a comedy, and the deaths are all accidental.  This is a funny film that uses all of the horror stereotypes to play for laughs. Tyler Labine, who plays Dale (from TV programs Reaper and Mad Love), and Alan Tudyk (Transformers: Dark of the Moon), who plays Tucker, are brilliant as the dim-witted hillbillies who don't quite get why anyone could be afraid of them. If you are a fan of films like Shaun of the Dead and Attack the Block, you should see this delightful movie.  My Rating: Full Price     Tucker and Dale vs. Evil Info

Weird Credits: From the credits of The Hunt: Truck Costumer

Coming Soon to a Theatre Near You: Soul (2020)   A musician (Jamie Foxx) who has lost his passion is transported out of his body and must now find his way back, helping an infant soul (Tina Fey) learn about herself. All you have to say is Pixar, and I’m in.    Soul Website 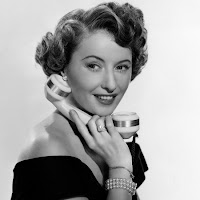