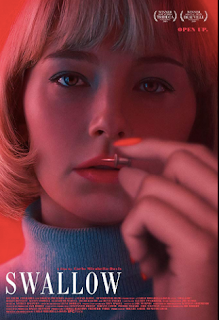 Indiefest: Swallow (2019) R   Hunter (Haley Bennett) is a pregnant housewife who finds herself increasingly compelled to consume dangerous objects. Feeling the pressure from her husband (Austin Stowell) and her family, she must come to terms with the dark secret that is behind her new obsession. Swallow is not an easy film to watch, just because Hunter starts swallowing larger and more dangerous objects as the film progresses. Haley Bennett is mesmerizing as a woman whose troubled past, along with her miserable marriage, causes her to try to find solace in swallowing objects. I loved the look of this film, with its post-modern furniture and Hunter’s outfits that could make the 50s TV moms jealous. While not a horror film, it is terrifying at times, as Hunter goes through both mental and physical travails. What I love about this film is that through Bennett’s performance, we are always on Hunter’s side, even when it seems that she is hell bent on harming herself.   My Rating: Full Price    Swallow Website      Available for rent on participating on-demand services.

Indiefest: The Bygone (2019)   A young rancher, Kip (Graham Phillips), falls for a Lakota woman, named Waniya (Sydney Schafer) from a nearby reservation. When the young woman goes mysteriously disappearing, Kip goes on a search that uncovers a harrowing past and a possibly deadly future. The Bygone is one of those films that tries too hard to tug at the heartstrings. The film covers prostitution, sex trafficking, fracking, prejudices, greedy landowners, and the dying of the family ranch. Add in a young cowboy who instantly falls in love with a Lakota woman who has been taken into a life of prostitution, and you have just about the whole plot. The ending feels rushed and not well thought out, as all the bad guys seem to want Waniya at the same time, while our hero, Kip, puts on a pair of antique six-shooters to save the woman. The film starts with such promise but ends with a resounding thud.   My Rating: Cable    The Bygone Website     Currently available on Netflix.

Indiefest: Crip Camp: A Disability Revolution (2020)   Documentary on Camp Jened, a camp in the Catskills ‘for the handicapped.’ The camp was an attempt to create a place for teenagers with disabilities in the early 70s that shaped lives and celebrated a group of teens who had faced discrimination and institutionalization. It’s hard to think of a time that we didn’t have bathrooms that could accommodate wheelchairs, much less sidewalks, and entryways. Nevertheless, before the 80s, this was the life of people with disabilities. The film does a magical job, through home movies and videos, of showing us how much the camp made an impact on teenagers that had never been around other teens like themselves. The film follows many campers as they went on to be crusaders in the fight for disabled equality. I had a great time watching this film as we get to know so many of these brave and interesting people who made a difference in the world. Have a blast, and go back to camp with a great group of kids.   My Rating: Full Price    Crip Camp Website      Currently available on Netflix.

Revisit Theatre (Mike watches and reviews a film he didn’t like the first time he saw it): Blow (2001) R   The story of George Jung (Johnny Depp) who goes from small-time pot dealer to being responsible for over 70 percent of all cocaine brought into the US in the 70s and early eighties. I didn’t like this film the first time I saw it in the theatres, and I still don’t. I will admit that I am not the biggest Johnny Depp fan, and I feel his performance in this film is a pretty smooth ride for Depp. Other than the early scenes of George making his mark in pot selling, I just never liked the character. George only cares about himself, and yes, near the end of the film, George finds a conscious and devotes himself to his daughter, but I thought that was an easy plot point to make him likable. The film has a hard time balancing the light and sometimes funny scenes during the first half of the film, with the dark and seedy scenes that fill out the 2nd half of the film. Still, not one of my favorites, and I stand by my original call.   My Rating: Bargain Matinee     Blow Info

Forgotten Film:   Just One of the Guys (1985) PG-13   Terry (Joyce Hyser) is smart, popular, and a great writer, but when she loses a summer intern at a newspaper because she is a woman. Terry decides to turn the tide, dress as a boy and go to a different school, and write an article on how easy guys have it in the world. At first glance, this looks like another 80s teen comedy, and at times it does go there, but at its heart, the film has a very timely quality about it, dealing with a lot of subjects that we are still debating today. Hyser gives a winning performance, though, at times, it’s tough to see how any of her classmates can’t figure her secret out. While the music and the fashions are dated, the subject matter still works today.   My Rating: Bargain Matinee    Just One of the Guys Info

Weird Credits: From the credits of The Bygone: Animal Colorist

Coming Soon to a Theatre Near You: Always Sometimes Never (2018) PG-13   Alan (Bill Nighy) Is a tailor who, for years, has been searching for his missing son, Michael. Alan last saw his son when Michael stormed out of the house. Now with his younger son Peter (Sam Riley), Alan goes on a quest to find his missing son. Hey, anything with Bill Nighy is worth watching!     Sometimes Always Never Website