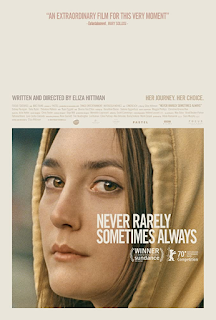 Indiefest: Never Rarely Sometimes Always (2020) PG-13   After an unintended pregnancy, a pair of teenage girls, Autumn (Sidney Flanigan) and Skylar (Talia Ryder), travel from rural Pennsylvania to New York City to seek out help for their situation. I will warn you right upfront, this is a story about a teenage girl’s determination to get an abortion. The film shows the torment that Autumn is going through and the quiet, determined support that Skylar gives Autumn without reservations. The film explores all the steps that Autumn has to go through to get the procedure, including going through a clinic that is a sham for a pro-life group. This is not an easy watch, and you go through all of the emotions that Autumn is experiencing, but Flanigan and Ryder are outstanding and director/writer Eliza Hittman slowly, quietly and lovingly, lets us into the girl’s world as they brave the situation.   My Rating: Full Price    Never Rarely Sometimes Always Website    Available for rent on participating on-demand services.

Indiefest: The Other Lamb (2019)   For her whole life, Selah (Raffey Cassidy) has only known the world of the cult, a cult in a remote forest commune presided over by a man called Shepherd (Michiel Huisman). When Selah begins getting a series of troubling visions, she begins to question her allegiance to the cult and Shepherd, something that could end her life as she knows it. Selah is in a cult that she knows is wrong but doesn’t have a way to get out of the situation. The film should have been filled with tension, but it never quite delivers the atmosphere that the film sorely needs. I loved Huisman’s performance as Shepherd, a man who, almost with just a look, controls the cult with an iron fist, is mesmerizing in the role. I wish I felt the same about Raffey Cassidy, but her performance is a bit bland, and I never quite got the emotional pull from her character that I needed to get invested in her character's well being.    My Rating: Bargain Matinee    The Other Lamb Website    Available for rent on participating on-demand services.

My View: Uncorked (2020)   Elijah (Mamoudou Athie) is torn between his passion to become a master sommelier and the pressure to carry on the family legacy of a Memphis Bar-B-Cue joint. I wanted to like this film because I love wine, even reading The Wine Spectator for many years, and one of my favorite things to eat is Bar-B-Que. Unfortunately, the film feels like a made for TV movie with very wooden and simple characters, a plot that was probably written on a napkin and dialogue that wastes the talents of Courtney B. Vance and Niecy Nash, who play Elijah’s parents. I wish the writing was as good as the Bar-B-Cue looks at the family restaurant, but it makes this film feel like an overcooked brisket, dry and unappealing.   My Rating: Cable      Uncorked Website    Currently available on Netflix.

Indiefest: The Wild Goose Lake (2019)   Zenong (Ge Hu) is a gangster who gets caught up in a gang war where Zenong mistakenly kills a cop. Now Zenong is on the run and hatches a plan to have his wife turn him in for the reward, as long as he can talk a call-girl (Lun-Mei Kwei into helping him carry out his plan. What I liked about the film: the look of the film is beautiful and has a very film noir feel to it with a lot of rain thrown in, and the action sequences are extraordinarily fun. The thing that I didn’t like about this film: the plot takes too many turns as it seems Zenong can’t trust anybody not to screw him over. The storyline goes on far too long, and I got confused a couple of times on what exactly was happening to the main character. The film’s first fifteen minutes is so much fun with us getting to know Zenong’s world; I just wish that it had continued in that vein.    My Rating: Bargain Matinee     The Wild Goose Lake Website    Currently available on the Film Movement Virtual Cinema.

Forgotten Film: Blind Faith (1998) R   In 1957, John (Courtney B. Vance), a black lawyer, takes the impossible case, a black man (Garland Whitt) is accused of strangling a white boy to death. This isn’t any ordinary case; the accused man has confessed and is John’s nephew. This is a brilliant courtroom drama that is led by the fantastic Courtney B. Vance, who deals with a deck that is stacked against his client from the beginning. Rounding out the cast is Charles S. Dutton, who plays the accused man’s father, and as usual, Dutton gives every scene his all. I wish more people had seen this film when it came out because it has some great performances worth checking out.   My Rating: Full Price    Blind Faith Info

Weird Credits: From the credits of Uncorked: Group Walla Mixer

Coming Soon to a Theatre Near You: Artemis Fowl (2020) PG   Artemis Fowl II (Ferdia Shaw) is a 12-year old who comes from a long line of criminal masterminds. Artemis is on a mission to find his father (Colin Farrell), who has mysteriously disappeared. Artemis is about to find out that the world is full of surprises, including elves, dwarves, and fairies. The trailer looks great, and it’s directed by Kenneth Branagh, so I’m ready to visit this world.        Artemis Fowl Website