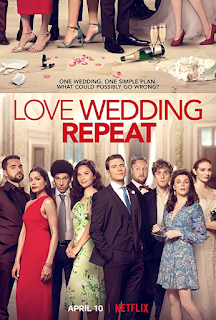 My View:  Love Wedding Repeat  (2020)   Jack (Sam Claflin) is trying to make sure that his little sister has the perfect wedding day. Little did Jack expect that the girl of his dreams (Olivia Munn) that he let get away will come back in his life while the wedding falls apart at the seams. I loved the first half of the film, as everything that could go wrong with the wedding reception does. I didn’t quite enjoy the 2nd half of the film, once a plot twist happens and I felt the ending felt a little rushed and weak. Overall, I enjoyed the film, especially the two leads, Sam Claflin and Olivia Munn, who have incredible chemistry with each other and play off of each other with beautiful results. I also thoroughly enjoyed Aisling Bea, who plays Rebecca, a loudmouth, very opinionated friend of the bride who has a crush on one of the members of the wedding party. Bea has a fabulous, humorous presence that lets her dominate the too few scenes she is in. Overall it’s a fun romp about a wedding that is destined to go wrong, or is it?    My Rating: Bargain Matinee     Love Wedding Repeat Website   Currently available on Netflix.

Indiefest: Extra Ordinary (2019) R   Rose (Maeve Higgins) looks like an ordinary driving instructor, but this sweet, lonely Irish woman has supernatural talents. Rose is determined to use her powers to save Martin’s (Barry Ward) daughter from the clutches of a washed-up rock star (Will Forte) that has made a pact with the devil to return to his glory days. This is one of those movies that if you saw it at a midnight showing at a film festival, you would have had a great time. It’s a film full of interesting characters that are put in some humorous situations but doesn’t always hit the funny bone the way you want it to. Barry Ward, playing the widower whose dead wife is a ghost that is still trying to run his life from the afterworld, has some sweet comedic moments in the film and shows a knack for physical comedy. Maeve Higgins, as the driving instructor who reluctantly helps Barry with his wife/ghost, is mildly funny but has a hard time keeping up with the antics in the plot. I got tired of Will Forte as the one-hit-wonder who is willing to do anything to get back into the limelight. Forte lays the act of the pompous rock star a little too thick, and it drags the film down a bit. It has a plot that isn’t quite funny enough to be a hit other than with that late-night crowd.    My Rating: Bargain Matinee    Extra Ordinary Website   Currently available on the KinoNow digital platform.

Indiefest: Almost Love (2019)   Ensemble comedy revolving around Adam (Scott Evans) and Marklin (Augustus Prew), whose once hot relationship has forced them to reconcile with each other’s shortcomings while their friend's lives are crumbling around them. I saw this delightful romantic comedy at the Out on Film Festival last year in Atlanta under the title of Sell By. It’s a smart, funny film with a cast that continually hits their performances out of the park. Evans and Prew, as the central couple that everyone revolves around, are perfect as the struggling artist and his hugely successful social influencer. While the film does revolve around Adam and Marklin’s eroding relationship, what I enjoyed was each of the supporting cast is allowed to shine with their own storylines. Michelle Buteau gives an inspired performance as Cammy, a single woman who gets involved with a homeless guy against her better judgment and Zoe Chao, who plays Haley, a young woman who is desperately fighting her attraction to a high-school student who she is tutoring. The film is bolstered by notable actresses Kate Walsh, who plays Adam’s best friend and Patricia Clarkson as a pretentious artist whom Adam moonlights for. Almost Love treats all it’s characters with respect and love, all the while allowing us to have fun with a bunch of people who are all trying to find ‘the one.’    My Rating: Full Price    Almost Love Info    Available for rent on participating on-demand services.

Forgotten Film: Bite the Bullet (1975) PG   A motley group of cowboys go on a 700-mile race in the desert to win a monetary prize. Writer/director Richard Brooks gives us a gripping tale of grit, determination, and survival when the cowboy way of life was just about done. Two of the contestants are played by Gene Hackman and James Coburn as two former Rough Riders who are looking for one last bit of glory. Candice Bergen plays an ex-prostitute that can ride with the best of them and Jan-Michael Vincent as a brash cowboy who is willing to do anything to win. The film was shot on location at the White Sands National Monument, and it uses the rough and harsh location to show just how hard the completion is on both man and horse. Made during a time when westerns were out of favor, Bite the Bullet is everything you would want in the genre and more.    My Rating: Full Price    Bite the Bullet Info

Weird Credits: From the credits of Extra Ordinary: Finger Man

Coming Soon to a Theatre Near You: The Green Knight (2020)   The story of Sir Gawain (Dev Patel), King Arthur’s nephew, who is determined to make his own legend as he takes on the Green Knight, a gigantic green-skinned stranger. When I studied the classics in college, this was one of my favorite stories.    The Green Knight Website