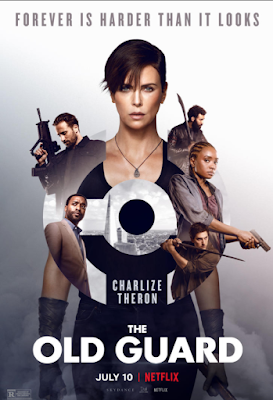 My View: The Old Guard (2020) R   Led by a warrior named Andy (Charlize Theron), a group of mercenaries who cannot die, have fought evil to protect the mortal world for centuries. Now a new recruit (KiKi Layne) has joined the gang, and the gang has to regroup when their identities are exposed to the world they seek to protect. I enjoyed this film, though I will admit the almost two-hour run time made the scenes between the fighting drag quite a bit. I am a big fan of Charlize Theron as an action star ( I love both Atomic Blonde and Mad Max: Fury Road), so anytime I can see Charlize kick butt, it’s a fun film to watch. There are some cool action sequences, especially the close quarter hand to hand fighting, and the plot is creative and has a few nice twists and turns. I wouldn’t mind seeing another film with the gang from The Old Guard.    My Rating: Full Price     The Old Guard Website    Available on the Netflix website.

My View: Greyhound (2020) PG-13  Early in World War II, an inexperienced US Navy captain (Tom Hanks) in charge of keeping an Allied convoy safe crossing the Atlantic must battle the Nazi U-boats that are waiting to attack. There have been a couple of films this year that I wish I had seen on the big screen, and this is one of them. The film begs for a big screen as Hanks and his ship battle a war of wits and skill with U-boats sinking the ships he is protecting. The film’s battle sequences are exciting and full of tension as the big destroyer makes moves to avoid the U-boats torpedos while trying to maneuver into a position to try and sink the German ships. Tom Hanks gives an impressive performance, reminiscent of the captains of vessels of cinema past like John Wayne and Clark Gable, while still giving off those nice guy Hanks vibes where his men are so devoted to their captain that they are willing to die for him. Don’t you dare watch this film on a computer screen, it needs to be seen on as big a screen as you can muster.   My Rating: Full Price     Greyhound Website   Available on the Apple TV+ website.

My View:   Palm Springs (2020)  R  Nyles (Andy Samberg) is at a wedding when he meets the maid of honor Sarah (Cristin Milioti) at a Palm Springs wedding. Nyles saves Sarah from making a huge mistake, and they instantly hit it off. Little does Sarah know that she and Nyles are destined to relive the same day over and over. I am not a huge fan of Andy Samberg as he has a tendency to go over the top with his performances, but this time, Samberg is somewhat restrained and is quite enjoyable. He has excellent chemistry with Cristin Milioti, and they play off each other with great timing. Sure this film steals a bit from a few classic movies, but it makes the format its own and does it quite well. It doesn’t hurt that the supporting cast includes J. K. Simmons, Peter Gallagher, Tyler Hoechlin, June Squibb, and Meredith Hagner. Palm Springs is fun, sometimes a little twisted, and is an excellent addition to the romantic comedy genre.    My Rating: Full Price    Palm Springs Website   Available on the Hulu website.

Indiefest: Parallax (2020)   A young artist, Naomi (Naomi Prentice), wakes up to a life that she doesn’t recognize, and her dreams are haunted by nightmares of drowning in a deep black pool. This makes her question her identity and sanity as her paintings take her to a world that she doesn’t know how to deal with. It took me a while to get into this film, but I wanted to know how it was going to turn out once I did. Parallax is more a psychological film, as we as viewers have to figure out what is real and what is imagined by Naomi. The film slowly peels back the layers as Naomi explores the mystery that is her life, and we journey along with her on the travels through the pictures that she has created. I enjoyed this trip into Naomi’s mind, reminding me of some of the Sci-Fi stories I read as a kid.   My Rating: Bargain Matinee    Parallax Website    Available for rent on participating on-demand services.

Indiefest: Guest of Honour (2019)   Veronica (Laysia De Oliveira) is a high school teacher who has been arrested for a sexual assault that she didn’t commit but is willing to take the fall because she feels she is being punished for crimes she committed at an earlier age. Jim (David Thewlis) is Veronica’s father and isn’t above using his power as a food inspector to get her daughter off. This film tells two different stories; one is Veronica telling the story of her life with her dad to the priest (Luke Wilson), who is helping plan Veronica’s father's funeral. The second story is Jim’s story of his life as a food inspector, which he took to spend more time with his sick wife/mother of Veronica. I had a hard time getting into this film, though I did enjoy the performance of David Thewlis, who is always interesting to watch on the screen. The film has a rather clunky plot that I never quite could get into. I had a hard time figuring out what exactly Veronica was dealing with, both in her present life and in her childhood. The film feels messy almost from the start and never clicked for me.   My Rating: Cable    Guest of Honour Website   Available for rent on participating on-demand services.

Indiefest: Mucho Mucho Amor: The Legend of Walter Mercado (2020)   For decades, Walter Mercado was the world’s most famous astrologer, whose televised horoscopes captivated an audience that reached 120 million Hispanic viewers a day, then one day, Walter mysteriously disappeared. Living in San Antonio until my late 30’s, I was always aware of Walter Mercado, this strange, flamboyant man who gave out advice based on the astrological signs. While I speak a little bit of Spanish, I was mostly just captivated by the spectacle of Walter, which seemed like one big theatrical experience. The film looks at Walter's influence on his audience (though it does blame his manager for some of his shadier deals, like the psychic network he shilled for) and just how much he meant to his fans. The film's highlight is when super fan, Lin-Manuel Miranda, shows up to spend time geeking over Walter. The film does give you a glimpse into Walter’s life after he left TV (mostly due to legal problems with his former manager), and if you grew up watching Walter with your parents and grandparents, it will be a fun trip to the past.   My Rating: Bargain Matinee    Mucho Mucho Amor Website   Available on the Netflix website.

Indiefest: Inmate#1: The Rise of Danny Trejo (2019)   Actor Danny Trejo, having spent much of his early life in prison, discusses his career and how he has overcome a life of crime and addiction. It is incredible that Danny Trejo survived his childhood; much less became a movie star. A heroin addict by age twelve, thanks to an uncle, Danny was on a journey that would have ended either with his death or being locked in prison for the rest of his life. Instead, Danny in 1969 went to AA and got clean. He then became a world-renown drug counselor and was happy in the life he had made for himself. As we know, Danny’s story didn’t end there, and that is where the fun of this documentary takes you, as you discover that wonder that is Danny’s life. To say that you will fall in love with Danny, the real person (who still lives in the area he grew up in), is a given. And you will be amazed and astounded by the journey that Danny takes on his road to stardom in Hollywood. This film is so much fun to watch and, if you aren’t already, it will make you a fan of Danny Trejo and his incredible life.   My Rating: Full Price    Inmate #1 Facebook Site    Available for rent on participating on-demand services.

Forgotten Film: But I’m A Cheerleader (1999) R   Megan (Natasha Lyonne) is the envy of her high school; she is a cheerleader, popular and has a steady boyfriend. However, Megan is a little ˜different’; she’s pretty handsy with her fellow cheerleaders, only has pictures of girls up in her locker, and her boyfriend notices that she isn’t really into him. Her parents and friends decide that Megan must be gay, and her parents send her off to a sexual redirection school. The school could just be what Megan needs, especially when she meets a fellow camper named Graham (Clea DuVall). This isn’t a great film, and it takes a while to get going, but once Megan is at the camp, it becomes a lot of fun to watch. The film has a great cast, including Michelle Williams, Bud Cort, RuPaul, Cathy Moriarty, and Melanie Lynskey. Plus, Natasha Lyonne is so much fun to watch get into trouble.   My Rating: Bargain Matinee    But I'm A Cheerleader Info

Weird Credits: From the credits of The Old Guard: Aviation Supplier