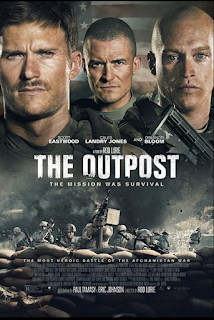 My View:  The Outpost (2020) R   A small band of US soldiers in a combat outpost battle against hundreds of Taliban fighters in Afghanistan. I wish that more theatres were open and we could see this film on the big screen because, I think to get the full impact of this movie, you need to be immersed in the spectacle of this rough and realistic look at life in a camp that was nearly impossible to defend. Based on a true story, the film looks at life of soldiers in a war zone where their lives can be taken at virtually every moment. This is not your grandfather’s or even your father’s glamorized look at war but a down and dirty view of how hard it is to be a soldier in a country that doesn’t want you there. The film does a great job of letting us get to know the soldiers in the camp and how they deal with a camp that was set up to fail. Scott Eastwood gives one of his best performances as the heroic Staff Sgt. Romesha, Orlando Bloom, is outstanding as the camp commander who has to keep the morale up in the camp while trying to keep the local leaders happy, all the while the Taliban is lurking, always looking at a way to slowly whittle away at his men. The actor that stands out in the excellent cast is Caleb Landry Jones as Specialist Ty Carter, a solider that doesn’t quite fit in, but when the chips are down comes through. Added touch to the real feel of the film is that some of the actors were the actual soldiers in the engagement. The battle sequence takes place during the second half of the film and director Rod Lurie, allows us to experience the horror of war as he uses long, unflinching takes that ramps up the tension and the overwhelming feeling that the lives of the soldiers we have gotten to know just might be doomed. The Outpost is a film that needs to be seen, and I wish it was on the big screen.   My Rating: I Would Pay to See it Again    The Outpost Info    Available for rent on participating on-demand services.

My View: Desperados (2020)   Wesley (Nasim Pedrad) hasn’t had a great year, and after a horrible blind date, she meets the man of her dreams, Jared (Robbie Amell). After a month of dating, the couple finally sleeps together, and then Wes doesn’t hear from Jared for five days. Egged on by alcohol and her two best friends (Anna Camp, Sarah Burns), Wes writes a blistering email but learns that Jared got into a car accident and hasn’t been able to reach Wes. Wes decides to travel down to Mexico where Jared is and somehow erase the email before Jared is released from the hospital and can see the document. Let’s start out by saying this film is an hour and forty-five minutes long, and it feels like it’s even longer. The premise of the film is darn thin that it barely can sustain fifteen minutes of plot, much less a whole movie. I never cared about Wes, and it is so apparent from the start that Jared is not the right guy for her. There is a subplot involving Anna Camp, that wastes her comic talents and the cameo of Heather Graham,  that is almost as stupid as the main plot. The film falls flat on its face from the start and never recovers. Sure if you have Netflix, you might think, what can it hurt watching this film…oh it will hurt.    My Rating: You Would Have to Pay Me to See it Again     Desperados Website    Available on the Netflix website.

My View: John Lewis: Good Trouble (2020) PG   Documentary on the legendary civil rights crusader and Georgia representative, whose career spans 60-plus years of social activism on essential issues such as civil rights, gun control, and voting rights. These days it is sometimes hard to feel good about your elected officials, but that is not the case with John Lewis, a man who stands for the rights of all people. The film tells the story of a son of a sharecropper, who as a young boy, preached to the chickens he was in charge of feeding and was so worried about his appearance, wore a tie in high school. At a very early age, Lewis became an essential cog in the Reverend Martin Luther King Jr.’s movement of civil rights and the nonviolent protest movement. The film moves back in forth from giving us the history of Lewis’s struggle for civil rights and his battles in the halls of Congress to the present day with the close defeat of democratic governor candidates in Texas and Georgia. I thoroughly enjoyed my time with John Lewis and now, more than ever, admire a man who was willing to risk his life to bring about change in our society.   My Rating: Full Price    John Lewis: Good Trouble Website    Available for rent on participating on-demand services and at select drive-ins around the country.

My View: Athlete A (2020) PG-13   Documentary that follows the reporters of the Indianapolis Star who in 2016 broke the story which brought to light the USAG women’s team doctor, Larry Nassar, had been abusing athletes for over two decades and the cover-up that allowed the abuse to thrive. Athlete A is a fascinating film that just when you think the situation it is showcasing can’t get any worse, it does. Looking at the story through the eyes of the investigative team at the Indy Star paper, we get to see how the story kept getting bigger and bigger, as more of the sorted and horrible details came forward. Due to the courageous efforts of some of the victims, especially Maggie Nichols, we see how Dr. Nassar operated under the guise (sometimes in the very presence of parents) that he was doing ‘special adjustments’ to the young women. The fact that this man had his job for so long and that so many officials knew what was going on is a blight on our Olympic past and will make you incredibly mad. Athlete A is a film and a story that needed to be brought forward into the light and those involved should be punished.    My Rating: Full Price     Athlete A Website   Available on the Netflix website.

Indiefest: Homewrecker (2019)   Michelle (Alex Essoe) is a newlywed and an interior designer. Linda (Precious Chong) lives alone and is looking for someone to help her redo her home. Linda coerces Michelle into visiting her home, and it soon becomes clear that Linda has something more sinister in mind than just decorations. This is an odd film that combines horror/suspense with a bit of comedy. Homewrecker a tale of two women who meet by chance or did they. It’s a tale with a few surprises and takes some wild turns but is fun to watch. I will tell you that some of the camera work and a few of the action sequences are not well done, and the dialogue is a little clunky, but I did enjoy seeing where the film was going to go and this would make a great addition to any film festival's midnight movie slot.   My Rating: Bargain Matinee      The Homewrecker Info    Available for rent on participating on-demand services.

Forgotten Film: Brassed Off (1996) R   The town of Grimley, a Yorkshire mining town, has had a brass band, made up of local miners, since 1881. The government has decided to go to nuclear power, and the local mine is about to close. Danny (Pete Postlethwaite) is the band's leader and is determined to keep the band going despite the layoffs and get his band into the national finals. In walks Gloria (Tara Fitzgerald), a talented flugelhorn player whose late father was a legend in the band. Gloria is the first woman to ever join the band, and there is one problem; she is the former crush of Andy (Ewan McGregor), and Gloria is conducting a study of the mine that might speed up the closing. I love this film, and though you might think that the center of the story is the love story between Andy and Gloria, the film really is about Danny and his determination to keep the band going, convinced that it can keep the town going through the hard times. The music is fun and rousing, but it’s Pete Postlethwaite that makes this film work so well.   My Rating: I Would Pay to See it Again    Brassed Off Info

Weird Credits: From the credits of The Outpost: Pashto Voice Actor

Coming Soon to a Screen Near You: Father Soldier Son (2020)   Documentary on a former platoon sergeant and his two young sons spanning over a decade, chronicling his return home after a severe combat injury. The plight of veterans in this country needs to be examined, and I welcome this documentary as it explores just how much our soldiers sacrifice.    Father Soldier Son Website