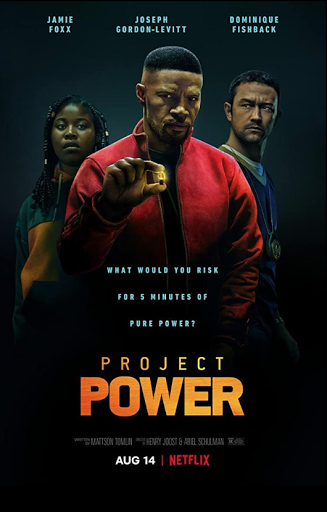 My View: Project Power (2020) R     A pill that gives its users superpowers for five minutes hits the streets of New Orleans. A teenage dealer (Dominique Fishback), a local cop (Joseph Gordon-Levitt), and an ex-soldier (Jamie Foxx) team up to get the drug off the street before people start dying. The film asks, would you take a pill that could give you a superpower, if you didn’t know what that superpower would be and oh, by the way, can kill you, sometimes instantly? The film moves at a quick pace as the lives of the three principals merge together (sometimes pretty awkwardly), and the action becomes at us at an almost blinding speed. Foxx and Gordon-Levitt are fun to watch, doing their badass bits but its Fishback, as a quick-talking, wannabe rapper, who deals in the pills that give the superpowers. Fishback, who delivers wisecracks with a rapid flurry, has excellent chemistry with both Foxx and Gordon-Levitt, making up for the shaky plotline that stretches incredibly thin to keep Fishback’s character involved in the attempt to find the source of the super-pills. So, sit back and go on a ride with quite a few thrills and spills, just don’t take the pill because you might blow up.    My Rating: Bargain Matinee     Project Power Website    Currently available on the Netflix platform. 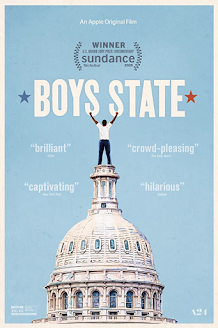 Indiefest: Boys State (2020) PG-13    Every year, a thousand 17-year-old boys from Texas come to Austin to build a representative government from the ground up, culminating in the elections of their government. This is one of those films that takes what could have been a boring subject and makes it into magic, holding your attention and suspense until the end. The program takes boys, separates them into two political parties, then the boys must decide party platforms, create legislation, and nominate boys to run against each other for various statewide offices, including the most significant office of all, governor. The film centers on four boys; the first two are running against each other in the same party. Steven, an underdog candidate who is earnest and willing to talk about issues, Robert, Steven’s primary opponent who is all about being popular and talking about what he thinks his voters want to hear. We also meet Rene, who has the charisma and the speaking ability to go far, and Ben, a double-amputee, whose run for governor dies before it even starts and realizes he can do more behind the scenes with a dirty tricks campaign to get his conservative ideas across. The film has you rooting for Steven, who is just marvelous as someone who wants to make a difference in the world, contrasting with the almost Darth Vader villain in Ben, willing to do anything to get his party elected. It’s a brilliant and compelling film that will give you hope for our political future.     My Rating: I Would Pay to See it Again     Boys State Website    Available on the Apple TV+ platform. 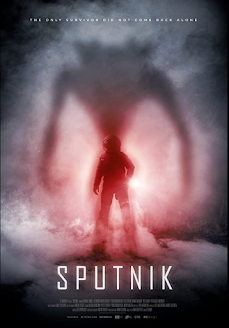 Indiefest: Sputnik (2020)    During the height of the Cold War, a lone survivor (Pyotr Fyodorov) of a Soviet spaceship accident has returned home, but he didn’t come back alone; inside, his body is a parasite, and a scientist (Oksana Akinshina) is charged with separating the two. An enjoyable and sometimes quite scary film that reminded me of the classic Sci-Fi horror films of the 70s and 80s. Taking place in the 1980s, this Russian film, perfectly sets the tone from the start, with a harrowing trip home by two astronauts. We don’t know exactly what happened, but we know it wasn’t good, with one of the astronauts killed and the other barely hanging on to life. The hero of the story is a headstrong scientist who is brought to a remote location, not told anything about her subject other than he is an astronaut who doesn’t remember what went on when his fellow spaceman died. As the film continues, a sense of dread and suspense starts building as we learn, along with the scientist, that there is something sinister going on. The film is more suspenseful than horrific, though there are a few killings that are quite graphic and bloody. The film will keep you guessing until the end, filled with outstanding performances by the two leads, which will keep you on the edge of your couch.    My Rating: Full Price      Sputnik Info      Available for rent on participating on-demand services. 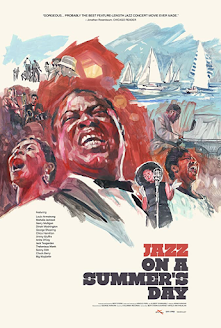 Indiefest: Jazz on a Summer’s Day (1959)   Legendary documentary on the 1958 Newport Jazz Festival. The film is considered the first concert film ever made and was named to the National Film Registry in 1999. The film has been newly restored funded by the Library of Congress in time to celebrate the film’s 60 anniversary. The film is a classic jazz lover’s dream with performances by some of the greatest jazz masters of the 20th century, most at the height of the artistic genius. The lineup includes Chico Hamilton, Anita O’Day, George Shearing, Jack Teagarden, Thelonius Monk, and even Chuck Berry. The film splendidly captures the sights of the Newport jazz fest scene, with plenty of closeups of people enjoying the performances. The highlights are a brilliant set by Gerry Mulligan, several songs by the wonderful Louis Armstrong, and a powerful performance by one of the greatest gospel singers ever, Mahalia Jackson, who closes out the film and the night as Saturday turns into Sunday morning. The film is a marvelous trip back to a time when jazz was the music of its time. Now, through the magic of cinema, we can experience one of the greatest music documentaries of all time.     My Rating: I Would Pay to See it Again     Jazz on a Summer's Day Website      Available for rent on participating on-demand services. 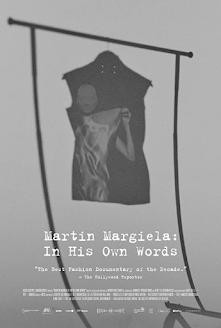 Indiefest: Martin Margiela: In His Own Words (2019)    Influential fashion designer Marin Margiela has been called the ‘Banksy of fashion,’ as he has famously avoided publicity and interviews throughout the years. Now through this documentary, Margiela has decided to come from behind the curtain and share his drawings, notes, and personal items in this intimate profile of his vision. I’m not big into fashion or clothes, but I have always been fascinated by the spectacle of the Paris/New York fashion scene. This film gives a fashionista and insiders look at a legendary designer who, for twenty years, created groundbreaking designs that people are still talking about. Margiela was a mysterious man at the time (and still is), as his face has never been seen by the public, hence the Banksy reference. I will admit, at times I got a bit bored by all the clothes that we see before our eyes, but the film does a brilliant job of giving us the look and feel of what Margiela’s almost mythical runway shows were like and while we don’t get to see the man, we do get to see inside the mind that created fabulous and storied creations year after year.    My Rating: Bargain Matinee     Martin Margiela: In His Own Words Website     Available for rent on participating on-demand services and on the Plaza Theatre Atlanta Website. 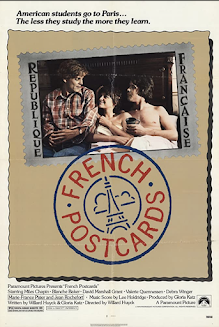 Forgotten Film: French Postcards (1979) PG   A group of exchange students from America come to Paris to study the language and the culture for a year. The film centers on three students; Alex (David Marshall Grant) who is in love or is it lust with his instructor (Marie=France Pisier), Joel (Miles Chapin) who falls for a cute assistant at a bookstore and Laura (Blanche Baker) who misses home and her boyfriend. Add in a very young Debra Winger, and this is a highly enjoyable film about Americans in one of the world’s most romantic cities. The film feels a little dated, but the performances are delightful, and the film feels more like a romance than one of those quirky Americans going nuts in a foreign country kind of film.   My Rating: Full Price     French Postcards Info

Weird Credits: From the credits of Project Power: Phantom Technician

Coming Soon to a Screen Near You:  Words on Bathroom Walls (2020) PG-13   Adam (Charlie Plummer), halfway through his senior year, has a breakdown in his chemistry class and is diagnosed with paranoid schizophrenia. Adam doesn’t just hear voices, he sees the people talking to him. Adam transfers to a new school, with thoughts of graduating and going on to cooking school. He then meets Maya (Taylor Russell), and she gives him hope that together he can make it in the world. The trailer looks fantastic, and the supporting cast includes Molly Parker (Lost in Space), Walton Goggins (Justified), and Andy Garcia (Ocean’s Eleven).       Words on the Bathroom Walls Website 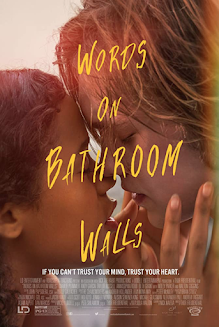