Note to readers: I currently am not willing to risk my health (I’m 63 and an asthmatic) by visiting a theatre. All films that I have seen for review have been screened in my home. I am not going to tell you whether or not to attend a theatre. Just be aware of the risks, do your research, and follow the instructions. 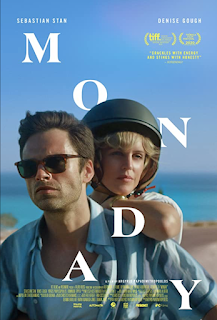 My View: Monday (2020) R   Mickey (Sebastian Stan) and Chloe (Denise Gough), two Americans on vacation in Greece, meet by chance and have a great weekend together. When it's time to go back to her boring world, Chloe decides to give up her job back home and find out if this passion for Mickey can turn into something real and lasting. This is a film that begins light and fun, as many romances do, especially ones that start as one extended, sex-filled date. Like romances that start fast and quick, reality soon makes itself known in the relationship, as the two lovers discover more about each other. We learn that Mickey has a son from a messy relationship and that Chloe is hiding a secret on why she wanted to leave Greece. I enjoyed the first half of the film, but the second half drags a bit as problems start developing in the relationship, some of which are major, some seem very minor, but all are seen by the two characters as almost deal-breakers, as we have two characters that are just not meant to be in a long-term relationship with each other. I found that I had very little interest in Mickey and Chloe staying with each other because the film never makes it evident that they should be together. Yes, life is messy, and relationships are complicated, but sometimes it is a better result if both parties figure out they shouldn’t be together and cut their losses. Unfortunately, the film never quite figures this out, and we are left as Monday ends with the couple continuing their downward slide on their own. My Rating: Bargain Matinee    Monday Website   Now playing in select theatres.

My View: Vanquish (2021) R   Victoria (Ruby Rose) is a former drug courier for the Russians known for doing anything to get the job done. When retired cop Damon (Morgan Freeman) kidnaps Victoria’s daughter, she must go on five courier jobs, or her daughter will be killed. You know you are in trouble with a film when the filmmaker takes the point of view of a rat, not just for a quick glance but for multiple shots while the dialogue is trying to set up the storyline. Speaking of storyline, there is a scene near the beginning of the movie where Damon (Morgan Freeman) is in a church confessing his sins to a priest. I have not a clue what Damon tells the priest or why, but we get it; Damon is a dirty cop. The action sequences are horrible, and the car chase scenes are so dull I thought I was watching a traffic cam from a local highway. There are some genuinely mind-numbing scenes where Victoria is on her way to do another pick-up, and we see flashbacks to scenes we just saw a minute ago, along with a closeup of her daughter crying out for her mother. The ending is predictable from almost the beginning of the movie and has one of the worst special effects I’ve ever seen in a film or TV show. I kept flashing back to when I was younger and would go into a video store and rent a straight-to-video movie with some action star whom I barely knew; only those films had some fight sequences that I wanted to watch…this one, not so much.     My Rating: You Would Have to Pay Me to See it Again    Vanquish Website   Now playing in select theatres and available for rent on participating on-demand services on April 20th.

Indiefest: Bill Traylor: Chasing Ghosts   (2020)   Bill Traylor was born into slavery on a cotton plantation in rural Alabama. After the Civil War, he worked as a sharecropper, then moved to Montgomery, where he did odd jobs until in his 80s, he started drawing and painting. This documentary looks at the man and the remarkable drawings and paintings Bill did between 1939 to 1942 that took on the art world and shook it to its core, with Traylor being recognized as one of America’s greatest self-taught artists. This is such an interesting film about a man I knew very little about other than he was some sort of folk artist. Traylor did most of his art in the last decade of his life and mainly used scrap pieces of cardboard that he found on the street. The film uses a mix of interviews with art historians, relatives, and people who knew Bill, along with actors reciting works by Langston Hughes and Zora Neale Hurston and a performance by tap dancer Jason Samuels Smith to illustrate Bill Traylor’s life and work. Bill was a fantastic artist, capturing his past life on the farm and his life living on Montgomery's streets, with drawings that seem almost to move because they are filled with his energy and life. I am so happy that I got to experience Bill Traylor’s art and come to understand what was behind those beautiful, brilliant pictures.    My Rating: Full Price     Bill Traylor: Chasing Ghosts Website    Available for rent on virtual cinema through Kino Marquee  which benefits local theatres.

Indiefest: In the Earth (2021) R   The world is in ruins as a dangerous virus is plaguing the world. A scientist, Martin (Joel Fry), and a park scout, Alma (Ellora Torchia), venture deep into the forest for a routine equipment run. Their journey soon becomes a terrifying trip through the unknown as the forest comes to life around them. This is one of those films that I wished I had seen at a film festival (preferably at a midnight showing) with a big crowd wanting to be scared. The film needs that energy from the crowd to create creepiness and ramp up the scares. Watching this at home, I know I didn’t have the same experience. I enjoyed that Alma is the stronger of the two, the leader, and Martin is a weak, meek follower who is way out of his element. The first two-thirds of the film are creepy as hell, as we get introduced to just how dangerous and mysterious the forest is. The film tries to build toward an ending that it doesn’t quite pull off. For all the fun and scares of the first portion of the film, the end feels lackluster as it becomes slowed down by its attempt to create a mythology about the forest and then justify that mythology as truth. For such a promising start of a film, the ending becomes a confusing and unsatisfying conclusion that makes you feel that the film could have been much more.    My Rating: Bargain Matinee     In the Earth Website     Now playing in select theatres.

Forgotten Film: melvin goes to dinner (2003) R Melvin (Michael Blieden) makes dinner plans to meet an old friend, Joey (Matt Price), who then invites an old friend, Alex (Stephanie Courtney), to come along. Alex runs into a friend of hers, Sarah (Annabelle Gurwitch), and invites her to the dinner. The four then over a lot of wine, discuss everything from death to dating to sex, all while waiting for their menus. Directed by Bob Odenkirk (Breaking Bad, Better Call Saul), this funny and charming film is like you are allowed to tag along and be at a table with four strange and hilarious people. The dialogue is real and witty, the camera work makes you a part of the dinner, and the stories they tell will have you laughing out loud. melvin goes to dinner is a film that deserved a bigger audience when it was released, winning a bunch of awards on the film festival circuit but never made it on the map. Grab a glass, or maybe a whole bottle of wine, and have fun with four people discussing life. Be sure to watch for all the soon-to-be well-known actors playing bit parts in the film like Jack Black, David Cross, and Jenna Fisher.    My Rating: Full Price    melvin goes to dinner info

Weird Credits: From the credits of Vanquish: Hair for Morgan Freeman

Where Have I Seen You Before?: Ellora Torchia, who plays Alma in In the Earth, was in the 2019 Indie hit Midsommar in the role of Connie.

Coming Soon to a Screen Near You: Eat Wheaties! (2021) Sid lives an under-the-radar life when it begins to unravel after he claims that he was friends with actress Elizabeth Banks in college. This looks like so much fun, and the cast includes Alan Tudyk, Sarah Chalke, Robbie Amell, Elisha Cuthbert, Paul Walter Hauser, Danielle Brooks, and David Walton.     Eat Wheaties! Website