Note to readers: I currently am not willing to risk my health (I’m 63 and an asthmatic) by visiting a theatre. All films that I have seen for review have been screened in my home. I am not going to tell you whether or not to attend a theatre. Just be aware of the risks, do your research, and follow the instructions 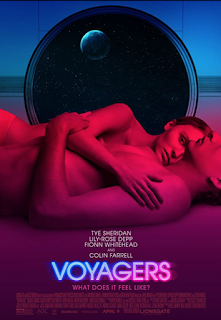 My View: Voyagers   (2021) PG-13    The future of mankind is at stake when a group of young men and women, bred for intelligence and obedience, are sent into space to colonize a distant planet. Christopher (Tye Sheridan), Sela (Lily-Rose Depp), and Zac (Fionn Whitehead) discover that the mission has a secret; that they are being drugged to make them comply with the mission. The three decide to defy their training and explore their most primitive natures, something that may lead them into chaos. Voyagers is one of those movies that had a lot of promise and is well made, but just never jells, never finds its footing and therefore becomes a very predictable and slow-moving film that feels like a rip-off of every ‘Lord of the Flies’ film made before it. The film never builds the tension that it needs, and some of the scenes feel forced. Due to the effects of the drug they are taking, it takes a long time to understand each character and what they are made of. When the drug wears off, the effect is too quick, too sudden, and we are suddenly asked to take sides when we don’t really know who to root for. I came away from watching this film feeling as if I didn’t care if they survived or not.    My Rating: Cable    Voyagers Website    Now playing in select theatres.

My View: Thunder Force (2021) PG-13   In a world where super-criminals are taking over, two former best friends, Lydia (Melissa McCarthy) and Emily (Octavia Spencer), reunite after one of them devises a treatment that gives ordinary people superpowers. With Lydia’s super strength and Emily’s invisibility, the two take on the villains threatening their city. Where to start with this mess of a film? The film wastes the talents of McCarthy and Spencer, putting them awkwardly into unfunny situation after unfunny situation. This is one of those films that loves to keep going back to a one-note joke until it has taken that joke and broken it into pieces. There is a running gag (no pun intended) where because of the superpower treatment, McCarthy only enjoys eating raw chicken, and the film keeps bring this up, time and time again, without a laugh anywhere to help. There is a dance sequence that I have no clue why it’s in there and what it was trying to accomplish, other than to make the film stop entirely for two minutes. The film feels much longer than its hour and forty-five-minute length, with a script that lacks any sense of humor or creativity. If you watch this film, and I’m sorry if you do, please explain to me what Jason Bateman’s characters super-power is? Nah, don’t bother, I want to forget this film as soon as I can.    My Rating: You Would Have to Pay Me to See it Again   Thunder Force Website    Now playing on the Netflix platform.

Indiefest: Moffie (2019)    In 1981, South Africa’s white minority government was in the midst of a conflict on the southern Angolan border. Nicholas (Kai Luke Brummer), like all white men over the age of 16, must complete two years of compulsory military service. Not only does Nicholas have to face the horrors of war, he must also deal with the fact that he is hiding a secret, the secret of his homosexuality. Kai Luke Brummer is brilliant as the troubled Nicholas, a young man who is confronted during his stint in the army with brutality, racism, and homophobia on a constant basis. Nicholas is a man who is just trying to survive and not bring attention to himself, knowing that if he is found out, life will become even more of a hell than it already is. Nicholas is constantly being reminded that his race and way of life is being assaulted by both blacks and Communists. The world that Nicholas has entered into is full of pain, ugliness and is filled with very few people he can trust. The film constantly builds tension, even in its quieter moments, so much so that it seems that Nicholas may take the route that some of his fellow soldiers take, trying to find an escape from this horrible world with drugs and alcohol, or even worse, a permanent escape. This is a film that will stay with you long after you watch it and will have you wondering what became of Nicholas after his stint in the army.   My Rating: Full Price    Moffie Website    Now playing in select theatres and is available to rent on participating on-demand services.

Indiefest: The Enormity of Life (2021)   Casey's (Breckin Meyer) life is so messed up, he even fails at a suicide attempt. When he receives a substantial inheritance from a long-lost relative, he embarks on a journey with a struggling single mom, Jess (Emily Kinney), and her eccentric young daughter, Jules (Giselle Eisenberg). To say that this strange little film is quirky would be an understatement. When your lead character is someone who wants to end it all because he doesn’t enjoy life, it makes it a little hard to want Casey to get what he wants. I loved Jess and the relationship she has with her daughter. Emily Kinney playing the effervescent Jess with a lovely and captivating presence makes her character just the person that Casey needs to meet at this time of his life. Jess is someone that can see the potential in a person, no matter if that person can’t see it themselves. Giselle Eisenberg is a bundle of fun as the girl obsessed with school shoots, able to spout facts and figures about them with an almost computer-like response. Breckin Meyer is fun as Casey, a sad-sack character of a man who doesn’t quite understand why he needs to be here on the planet, until he meets Jess and Jules. I had fun going on a small adventure with Casey, Jules, and Jess, and I hope you will too.   My Rating: Bargain Matinee The Enormity of Life Website    The film is available to rent on participating on-demand services.

Forgotten Film: The Hidden (1987) R   When normal, law-abiding people suddenly become violent criminals, a cop (Michael Nouri) and an FBI agent (Kyle MacLachlan) team up to try and stop this puzzling outburst of murders and robberies. This film starts out as your ordinary crime spree movie but soon, you realize that there must be something behind all the crimes being committed. The film has a ton of twists and turns, some you won’t see coming, and the chemistry between Nouri and MacLachlan to fun to watch, with MacLachlan playing the strange acting FBI agent as only he can. The Hidden is one of those films that nobody went and saw but should have because it’s well done and very creative.    My Rating: Full Price    The Hidden Info

Weird Credits:  From the credits of Voyagers: Breakdown Artist

Coming Soon to a Screen Near You:  Things Heard & Seen (2021)   A couple, Catherine (Amanda Seyfried) and George (James Norton), moves from Manhattan to a historic home in the Hudson Valley. Jane soon learns that not only does her new home have a sinister past, but her husband also may not be the nice guy she thought he was. Hey, a horror film with Amanda Seyfried? I’m in!    Things Heard & Seen Website