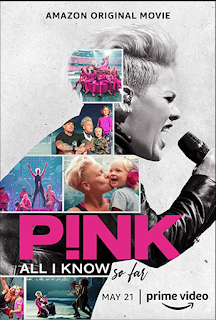 My View: P!nk: All I Know So Far (2021)  This is a documentary that gives us a behind-the-scenes look at Pink as she balances her family life with her performing life as she prepares for her first Wembley Stadium appearance on the 2019 Beautiful Trauma tour. Fans of Pink will love this film as it gives you an inside look at life on the road for her and her family. We get to see all the hard work that it takes to put on a stadium show like Pink’s, but we also see the hard work that Pink and her husband, Carey Hart, put into raising their two young children. I loved Pink’s sense of humor and how she let us see her in very intimate moments behind the scenes. The film takes you on a travelogue of sorts as we follow Pink and her family as they go from city to city, all building up to the big Wembley Stadium shows. There is a ton of concert footage from the tour, so much so, I wish I had seen the film in a theatre so that the spectacle of Pink’s concerts could wash over me. I did want more of the concert from Wembley, as the film constantly talks about the venue. We don’t quite get enough to experience what it was like to be a part of an 80,000 packed house. Overall, this is an enjoyable film, primarily due to both the talent and the humor of Pink and the fact that she let us into her and her family's lives during a time before COVID. My Rating: Full Price     P!nk: All I Know So Far Website  Available now on the Amazon Prime platform.

Indiefest: Dream Horse (2020) PG   Jan (Toni Collette) lives in a small Welsh town, working two jobs, dreaming of doing something different. She decides to breed a racehorse and get her neighbors to chip in, raise the horse and race it. Against all the odds, this small band of neighbors take a horse called Dream and try to make it to the big race. I saw this movie in a theatre at the 2021 Atlanta Film Festival and fell in love with it. This is a fun, funny, and warm movie that, while it doesn’t surprise you with its plot, it is inventive with its cast of characters. Toni Collette is marvelous as the determined Jan who comes up with the idea that this small town, down on its luck, can develop a racehorse that can succeed against the big racing corporations. What makes this film more remarkable is that it is based on a true story, and there is a beautiful scene at the end where the real people of the town mix with the cast to sing a Tom Jones song (he is Welsh, after all). Dream Horse is a film made to be seen with a crowd in a theatre because of the racing sequences, which are well done and exciting. Make a bet with your ticket, and you are guaranteed a winner at the finish line of Dream Horse.   My Rating: Full Price    Dream Horse Website  Now playing in select theatres.

Indiefest:  The Dry (2020) R    Aaron Falk (Eric Bana) is a Federal Agent who returns to his hometown after a twenty-year absence. For the last ten years, the town has suffered a horrible drought that has brought its people to a breaking point. While in town to attend a funeral for a boyhood friend, Falk reluctantly agrees to investigate an old murder mystery, one that has caused as much damage as the drought itself. The Dry is a well-done mystery that interweaves the past with the present. Aaron left town as a teenager with his dad after the mysterious death of a girl that Aaron was dating. He has come back to town to go to the funeral of his best friend from his school years. The friend, sick over the continued drought, has apparently killed his family than himself in a murder/suicide. His friend's elderly parents ask Aaron to investigate the deaths, as they are convinced that his friend would never do such a thing. There are some nice twists and turns to the story that keeps you guessing on both mysteries. Eric Bana has a pleasant screen presence that makes you want to root for him, and he has some great chemistry with Genevieve O’Reilly, who plays an old school friend with whom he starts up a relationship. The Dry slowly reveals the town's secrets, and I was guessing who did what up until near the end of the film.   My Rating: Full Price    The Dry Website   Now playing in select theatres.

Indiefest: Final Account (2020) PG-13   The documentary follows the last living generation of German participants in Adolf Hitler’s Third Reich. It was a fascinating and sometimes horrifying look at how Hitler and Fascism took over a country told by the people who experienced it. The film interviews men and women who were teenagers when Hitler took over Germany, exploring how they experienced life in a country ruled by a dictator. The film uses interviews conducted over the last ten years interspersed with footage and photos from the time. A great deal of the footage appears to be home movies, some shot in color, that hits home how much the Nazi propaganda bombarded the life of an ordinary German. Some of the people in the film are horrified and ashamed by what they did during this time, but there are other people in the movie that won’t admit that they knew about the horrible things going on in concentration camps or flat out deny that the divisions of the army they belonged to were involved. There is a heartbreaking portion of the film where a former army officer confronts some young people about what went on in Germany during that time. He almost breaks down, full of grief and shame, as he argues with a young person who thinks that he has it wrong, that he shouldn’t apologize for what Germany did during that time. Final Account is a hard film to watch due to its subject matter, and some of the footage is highly disturbing, but that is the way it should be. It should be hard to look back at this time where a country lost its grip on humanity.   My Rating: Full Price   Final Account Website   Now playing in select theatres.

Forgotten Film: Dead Again (1991) R   A woman (Emma Thompson) has lost her memory, and a private eye (Kenneth Branagh) is hired to try to track down her identity. The P.I. soon finds that the women may be connected to a crime committed in a past life. The plot is a little out there, and Branagh’s attempt at an American tough-guy accent is pretty bad, but the cast, including Andy Garcia, Robin Williams, and Derek Jacobi, makes this film worth watching. Plus, the chemistry between then real-life husband and wife Thompson and Branagh are off the chain good. I fell in love with Emma Thompson from this film, and that love is still there to this day. My Rating: Bargain Matinee    Dead Again Info

Weird Credits: From the credits of The Dry: Archival Cricket Team Photo

Coming Soon to a Screen Near You: Cruella (2021) PG-13   The origin story of how a young girl named Estella became the legendary villainess Cruella, the woman who wanted a coat made up of puppies. The cast includes Emma Stone as Estella/Cruella, Emmas Thompson as fashion maven The Baroness, Mark Strong as The Baroness’s valet, and Joel Fry and Paul Walter Hauser, as Estella/Cruella’s partners in crime. The costumes alone from the trailer make this a film you will want to see.      Cruella Website