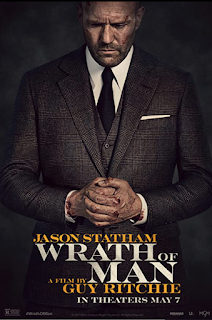 My View:  Wrath of Man (2021) R    A man only known as H (Jason Statham) is hired by a delivery company responsible for moving hundreds of millions of dollars around Los Angeles each week. On one such job, H’s truck gets held up at gunpoint, and H handles the robbers alone with advanced combat skills and training. There is more to H than meets the eye. Of course, there is, otherwise it wouldn’t be a Jason Statham film. First, the dialogue is horrible, and there are a few scenes meant to show us how H is a man not to be messed with that are downright laughable, but you don’t go to a Statham movie to see those. You go to see Jason Statham kick butt, and he does it quite a lot. The film can be a little confusing at times, and there is a scene that is the key to the reason H is the way he is, that we see way too many times in flashbacks, but you do get to see H kill a whole lot of bad guys. Up until the final battle, there isn’t a lot of hand-to-hand fighting that H does, which may disappoint Statham fans, as H is more a gunfighter than a fist-fighter. Still, I enjoyed Wrath of Man for what it does well, let Jason Statham be tough, menacing, and kill a whole bunch of people without breaking much of a sweat.   My Rating: Bargain Matinee     Wrath of Man Website   Now playing in select theaters.

My View: Here Today (2021) PG-13   A veteran comedy writer working on a TV show with a group of writers 50 years younger than he is, Charlie (Billy Crystal) meets New York street singer Emma (Tiffany Haddish), and they form an unlikely friendship. My first problem with the film, like many films before it that try to show the world of comedy, is that the skits that the writers come up with just are not funny, not even close. Charlie has a problem; he is at the start of oncoming dementia. In walks Emma, who he meets a lunch where she has an allergic reaction to something she eats. This is meant to be funny and cute but comes off so heavy-handed that it is painful to watch. Emma becomes friends with Charlie, and the film starts to fall apart when Emma gives up a promising career to take care of Charlie. The film feels too much like Billy Crystal, who directed and co-wrote the film, is patting himself on the back all the time. Emma doesn’t know anything about Charlie initially, but he is quick to tell her about all the famous people he has worked with and shows off all the awards he has won. Haddish tries to save the film, especially when she gets to sing a few numbers, showing off that charisma and talent that we love her for, but Here Today tries way too hard to tug on the heartstrings and the ending is just too sappy to endure.    My Rating: Cable   Here Today Website    Now playing in select theaters.

Indiefest: The Truffle Hunters (2020) PG-13   Documentary about a handful of men in Italy, all between seventy and eighty, that use dogs to hunt the rare and expensive white Alba truffle. This is a sweet and, at times, hilarious film about a group of complex, eccentric characters who love the hunt of finding truffles almost as much as they love the dogs that find the buried treasure. These are men who are a dying breed, who have honor and would rather die than give up where they find their precious bounty. The cinematography is breathtaking, and you haven’t lived until you go on a truffle hunt from the perspective of the truffle sniffing dog. The film at times feels as if you are back in time, with men who would be at home in the 1800s until things like money and greed rear their ugly heads to tell you that you are in the modern world. It’s an occupation that we knew little about where the prize is a delicacy that most of us will never experience, but for a while, we can experience the joy that a dog has in finding that treasure.   My Rating: Full Price    The Truffle Hunters Website     Now playing in select theaters.

Indiefest: Undergods (2020)   In a futuristic, post-apocalyptic world, K (Johann Myers) and Z (Géza Röhrig) roam the streets on the lookout for corpses and something even more valuable — fresh meat. This is a collection of loosely connected tales of a world where things have gotten really bad. A world that is permanently grey, with lives full of sadness and doom, where one false move could get you killed. Where greed and capitalism has taken over everyone's lives, and there seems no hope. I really enjoyed escaping into this world of despair, though I wouldn’t want to stay there. The stories the film tells were all different, but they all had that feeling that things wouldn’t turn out well. Some of the stories told have endings, and others just end, which seems to be a way of life in the Undergods film world.    My Rating: Full Price    Undergods Info   Now playing in select theaters and is available for rent on participating on-demand services.

Indiefest: Queen Marie (2019)   Devastated by the First World War and with a country divided into political controversy, Romania’s only hope is if its Queen (Roxana Lupu) can persuade the world to recognize its unification at the 1919 peace talks. It's hard to make a biopic about a subject where most of the action took place in a meeting room where men make speeches to each other. The storyline is filled with exposition to tell us just what the stakes are and how rare it was that a woman would be sent on such a critical diplomatic mission. The problem with the film is that it takes forever to get to the Paris Peace talks, with lots of speeches given about what will or could happen, and then the final result is so anticlimactic that you wonder if it was worth it. Queen Marie is a dull, slow ride down, a piece of history that is incredibly important to the country of Romania but, on-screen becomes unimportant to us in the movie theatre.   My Rating: Cable   Queen Marie Website   The film is available for rent on participating on-demand services.

My View: Monster (2020)    Steve (Kelvin Harrison, Jr. ) is a brilliant, well-liked film student from Harlem attending an elite high school when he is charged with felony murder. Now Steve is in the battle for his life that, if he loses, could leave him spending the rest of his life in prison. Steve is a high-school student whose favorite movie is Dead Presidents and knows the locations of every movie filmed in New York City. Steve dreams of making movies, and his fate is changed when he meets and befriends a local dealer (ASAP Rocky). Steve has a good life; his parents (Jeffrey Wright, Jennifer Hudson) have given him a loving, stable family home, and he goes to a prestigious high school. But Steve, wanting to experience life on the streets, falls into a friendship with the dealer, and because of that, he becomes a suspect in a murder of a shopkeeper. Kelvin Harrison Jr. gives a strong, poignant performance that can’t quite overcome a script that takes too long to develop and at times feels like an episode of a generic lawyer show on TV. The film gets a little too caught up in Steve’s obsession with filmmaking, making the narrative like it was part of a script Steve has written, filled with shots of Steve always looking through the lens of his camera. Monster is a story about a young man who is being tried by the system before he even gets into the courtroom but gets lost in its storytelling technique and can’t find its way back in what could have been a powerful film.   My Rating: Bargain Matinee    Monster Website  The film is currently available on the Netflix platform.

Forgotten Film: Candleshoe (1977) G   Candleshoe is a once-stately English manor that has seen better days. It’s the home of Lady St. Edmund (Helen Hayes), and with the help of her butler Priory (David Niven), is a home for orphans. Rumor has it that the manor is the resting place of a fortune in Spanish doubloons that a swashbuckling pirate hid long ago. Bundage (Leo McKern) is a con man who recruits Casey (Jodie Foster) to pose as Lady St. Edmund’s long lost granddaughter so that she can search for the location of the treasure. This is one of those live-action films that Walt Disney did a lot of in the 60s and 70s. It's not a great film, but it sure is fun watching Josie Foster work her magic on the screen, and David Niven has a blast as the butler who puts on disguises to fool Lady St. Edmund that she has a more significant staff to keep her from knowing how badly things have gotten. The film is notable for being the last feature film that legendary actress Helen Hayes was in and also that Jodie Foster turned down the role of Violet in Pretty Baby to make this film (the part then went to Brooke Shields).  My Rating: Bargain Matinee   Candleshoe Info

Weird Credits:  From the credits of Wrath of Man: Balloon Electricians

Coming Soon to a Theatre Near You: Finding You (2021) PG   Finley (Rose Reid), an aspiring violinist, is spending a college semester abroad in a small coastal village in Ireland. There she meets Beckett (Jedidiah Goodacre), a famous young movie star, in town to shoot a movie. Beckett takes the uptight Finley on an adventurous reawakening, and a romance blooms. Unfortunately, life and stardom get in the way. Hey, a romantic film set in Ireland? I’m in!      Finding You Website