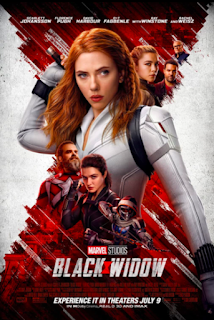 My View:   Black Widow  (2021)  PG-13   Natasha Scarlett Johansson), the Black Widow is on the run and discovers a link to her past, her own sister, Yelena Belova (Florence Pugh). The two sisters team up to break their father, Alexei (David Harbour), out of jail in an attempt to save the world. I want to let you know that right off the bat, my favorite Avenger character is Black Widow, and I have been very vocal about how we wanted and needed a Black Widow stand-alone film, and now we have one. This one is set in the past, between the events of Captain America: Civil War and Avengers: Infinity War. This is a film about a hero coming to terms with what she once was (an assassin) and what she is now (a hero). Natasha has a nasty and horrible past, where she never had the family she needed and was always seen as not as a person but as a tool and a weapon. Now Natasha must meet this past head-on as she encounters her long-lost sister, Yelena, who just recently figured out that she was also being used (against her will) to kill for others. This is a fast-paced, action-packed film that is enjoyable as a stand-alone film in the Marvel universe. Johansson is excellent, as usual, in the action sequences and also brings heart and soul into the complex character of Natasha. The film is made better by Florence Pugh, who plays the defiant sister who has a keen sense of humor than the always serious Natasha. Pugh is so much fun to watch on the screen, and they give her a wonderful catchphrase that she uses at just the right moments to make this film so enjoyable to watch. Add in David Harbour as an out-of-shape former Russian superhero and the always fantastic Rachel Weisz to fill out a cast of characters that are worth watching. Black Widow is the film that I wanted, letting me find out who the Black Widow was before the Avengers and be able to understand just how far she has come to become the hero we all love as the Black Widow. Oh, and by the way, be sure to stay through all the credits for a bonus scene.    My Rating: Full Price     Black Widow Website  The film is currently in theatres and also available on the Disney+ platform.

Indiefest:   I Carry You With Me   (2020)  R  Ivan (Armando Espitia), who dreams of being a chef one day, meets Gerardo (Christian Vazquez), a teacher, in a nightclub in Puebla, Mexico. Right away, their attraction is passionate and meaningful. However, there is trouble brewing; Ivan has a 5-year-old son whose mother would take away his visitation rights if she discovers that Ivan is gay, and Gerardo’s father, the leader of a ranching empire, considers Gerardo’s lifestyle a blight on the family. Despite his love of Gerardo and his son, Ivan decides to escape the dead-end jobs of Mexico for New York to carry out his dream of being a chef, leaving the two most important people in his life behind. Like Ivan’s and Gerardo’s lives, this film is a messy and sometimes confusing tale of love and love lost told from three different places in time; the harsh world of Gerardo’s childhood, the wonderful and occasionally painful time of Ivan and Gerardo’s courtship in their twenties, and the present where Ivan and Gerardo are just trying to live their lives as best they can. The film lovingly shows us their lives and their passions, especially Ivan’s love for food and how he can create something extraordinary from the simplest of ingredients. The film explores life in both Mexico and New York City, giving us an insight into the plight and issues of immigrants, both legal and illegal. I Carry You With Me is a love story for the ages and one that is explored through the eyes of two men who just want to love and live on their own terms, even if the world seems to want to keep them apart.   My Rating: Full Price     I Carry You With Me Website   Now playing in select theatres.

Indiefest:  The Loneliest Whale: The Search for 52  (2021)  PG   Documentary about a whale, called the ’52 Hertz Whale,' which scientists believe has spent its life in complete solitude. The whale gets its name from the 52 Hz frequency call that the whale makes, a frequency it is thought to be unrecognizable by other whales. Like the infamous Moby Dick, 52 is a whale of myths and legends. Some doubt the whale even exists, and if the whale did, is it still alive, and is it all alone, searching the seas with a siren call that is doomed to never be answered? Filmmaker sets out on an adventure to find out if 52 is still out there. The film is full of incredible footage of the voyage, using onboard cameras, along with drones and cameras that are placed on whales themselves, giving us an up-close look at what goes on in the hunt for this legendary whale that may not even exist. The film gives us a remarkable journey into the lives of whales and how they communicate with each other, all the while also showing just how delicate the balance of nature in the sea is and how mankind has seemed from ages to try to destroy the whale and its ecosystem. The Loneliest Whale is a beautiful and sometimes thrilling film that any nature lover will want to see. You will, as I did, will fall in love with the idea that 52 is out there somewhere calling out, waiting for an answer.   My Rating: Full Price     The Loneliest Whale Website  Now playing in theatres and will be available for rent on demand on July 16th.

My View:  Fear Street Part One: 1994  (2021)  R   Dena (Kiana Madeira) is a high-school student who hasn’t gotten over her breakup with Sam (Olivia Scott Welch). Dena lives in Shadyside, a town with a nasty history, one filled with people who go crazy and kill violently for no reason. Besides breaking up with Dena, Sam has made matters worse by moving to the rival town, Sunnyside, and to top it all is dating a boy. Another murder has occurred in Shadyside, and Dena’s little brother Josh ( Benjamin Flores Jr.) has begun using a new tool, the Internet, to piece together the mystery of the horrible mystery of killings in Shadyside. Dena, along with friends and some enemies, are determined to find out who or what is responsible for the killings and set out to end the curse once and for all. First, the killings are bloody and extremely violent, but this is a slasher movie, so it is to be expected. What I loved about this film is that we care about the characters, which the film has brilliantly set up, letting us get to know Dena, Sam, Josh, and the rest of the gang, so that we care about them and want them to succeed. Secondly, the plot is creative and has plenty of twists and turns to keep you guessing, and the film moves at a quick pace. The soundtrack is a blast, including hits from the time period, and helps propel the movie along. The film ends, promising more to come with the next movie, with a climax that is both satisfying and letting you know that bad things are still to come. Horror fans will have fun taking a trip back to the mall in 1994.   My Rating: Full Price     Fear Street Part One Website  Available on the Netflix platform.

My View:   Fear Street Part Two: 1978  (2021)  R    A series of brutal murders have plagued the town of Shadyside for over 300 years. The key to the killings may lay in the events that happened in 1978 at Camp Nightwing, where another Shadysider is possessed with the urge to kill, making camp an all-out fight to survive. We go back to 1978, where two sisters, Ziggy (Sadie Sink) and Cindy (Emily Rudd), from Shadyside, are working at the Camp. Cindy is the proper one, who follows the rules, and Ziggy is the wild sister, one who is always getting into trouble, though most of it is due to fellow campers from the rival town, Sunnyside. Soon, a murderer is on the loose in the camp, and it’s up to the two sisters to try and fight this murderer and maybe, just maybe, end the curse of the witch who was killed back in 1666. While not quite as enjoyable as Part 1, the film is a fun take on the 70s/80s horror films that used kids at camps as fodder for brutal murders and plots. I loved Sadie Sink, as the sister who the Sunnysiders feel is the cause of all their problems. Sink has a fiery energy that fills the screen, and she is a lot of fun to follow around as she tries to evade the murderer of Camp Nightwing. This film is a little too long in its almost two-hour time length, but it's still a blast to the past with songs from the 70s and lots of campers meeting gruesome deaths. The film, like Part 1, sets up the next film of the trilogy, Part 3: 1666.   My Rating: Bargain Matinee       Fear Street Part Two Website    Available on the Netflix platform.

Forgotten Film: Bright Angel (1990) R   George (Dermot Mulroney) dreams of college or anything else that will take him away from his unhappy parents (Sam Shepard, Valerie Perrine). When George and his father find another man at their home, and George’s mother leaves with that man, George decides he must escape. He finds that person to escape with in Lucy (Lili Taylor), a young woman whose brother is in trouble, and she has a plan to get him out of it. Lucy and George take off on an adventure that is doomed from the start, but they are determined to help her brother at any cost. Bright Angel is a film that is filled with interesting characters, all of whom seem lost in one way or another. These characters make plans that have no hope of completing, traveling the roads from one seedy place to another, with only each other to hold onto. Lili Taylor shows again why she is one of the best actors out there, breaking your heart from the first moment you see her on the screen. Bright Angel is a movie filled with hopes and dreams that are broken before the characters have even begun to think of them.    My Rating: Full Price       Bright Angel Info

Coming Soon to a Screen Near You: Fear Street Part Three: 1666 (2021) R  We go back to the origins of all the problems to see how the curse of Sarah Fier started, which changed the lives of Shadysiders forever. I love that we don’t have to wait for years to find out how it all started in this fantastic horror trilogy.      Fear Street Part Three Website