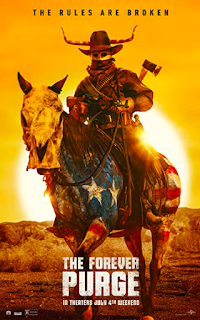 My View:  The Forever Purge   (2021) R   Adela (Ana de la Reguera) and Juan (Tenoch Huerta) have made a new life for themselves in Texas. They survive the night of the annual Purge and think all is well, but then realize that all the rules are broken as a sect of lawless marauders decide that the Purge does not stop at daybreak and may never end. The film is greatly helped by excellent performances by de la Reguera and Huerta, who give the film some life and give us heroes to boot, but they can’t overcome a script that is full of hate crimes and hits you constantly over the head with its message that if we just try to understand each other, we can get along. Unfortunately, the violence is ramped up and is delivered with the subtle touch of a baseball bat. This series has just become an excuse to create bigger explosions and gorier death scenes, all why trying miserably to have a message of unity.   My Rating: Cable    The Forever Purge Website  Now playing in theaters.

My View: The Tomorrow War  (2021)  PG-13  The world is amazed when a group of time travelers arrive from the year 2051 with a message that mankind is on the brink of losing a war with a deadly alien species. The only hope is for soldiers and civilians alike to come from the present to be transported to the future and join the fight. Among those recruited is Dan Forester (Chris Pratt), a high school teacher who leaves his family behind to save the world for his daughter’s future. I liked that this film takes the time-travel movie and turns it around, as usually people go back to the past to stop something from happening that will destroy the world, but in this case, people go to the future to stop an alien race from destroying the world. The problem is that Chris Pratt isn’t given much to go on with his character as Dan is a pretty bland guy with not a lot of humor or charisma going for him. The story bogs down with uninteresting characters through out the film and while there are some cool action sequences with fighting the aliens, the film suffers from an almost predictability and repetition of the battles between the humans and the baddies. The film drags at points and you feel it’s over two-hour length throughout the film. There is a good film somewhere in this plot but The Tomorrow War never finds its mojo, much like most of the soldiers sent to battle the aliens with almost no hope or training.    My View: Bargain Matinee      The Tomorrow War Website   Now playing on the Amazon Prime platform.

Familyfaire:   The Boss Baby: Family Business  (2021) PG   The Templeton brothers (voiced by Alec Baldwin and James Marsden) have grown up and drifted from each other, but they are about to be brought back together by a new boss baby and discover that brotherly bond that they had used to succeed in the past. I was not too fond of the first one, finding the plot confusing and the jokes very weak. This new adventure isn’t much better. The brothers are sent back to their childlike appearance infiltrate a school that could be taking over the world. And once again, the filmmakers feel that to put in as much action and clutter as they can to keep us from understanding the plot or enjoy the characters. Small kids may enjoy all the action and loud noises, but adults and older kids will soon get tired of the frantic story that never takes a breath. My Rating; Cable     Boss Baby: Family Business Website  Now in theatres and available on the Peacock Premium Platform.

Indiefest:  Zola  (2020) R  A waitress and part-time stripper named Zola (Taylour Page) meets Stefani (Riley Keough) and strikes up a quick friendship. Stefani talks Zola into taking a weekend trip to Tampa to make some fast and easy money. It’s a trip that Zola will regret ever taking. Zola is a movie that I think most critics are going to give glowing reviews for, but I did not enjoy this film and did not like anyone in the movie, including the main character, Zola, who is our hero for the film. This is a gross, ugly world full of characters that are vain and stupid. Zola seems to be the only one who has any sense, and even she seems to let her guard down way too much. Now, don’t get me wrong, Page and Keough give wonderful performances, but I don’t want to spend any time with either of them or be put into the situations they keep putting themselves into. I never could figure out if this was some sort of comedy, whether dark or otherwise, if the filmmakers were making fun of the characters or just feeling bad for them. I understand this film is based on a series of tweets that the real-life Zola made on a trip to the underbelly of Tampa back in 2015, but If I had started to read her tweets back then, I think I would have blocked them.   My Rating: Bargain Matinee     Zola Website    Now playing in theatres.

Indiefest: Audible  (2021)  PG-13   Documentary that focuses on football player Amaree McKenstry-Hall that plays on the Maryland School of the Deaf as he and his teammates defend their winning streak on the field while coming to terms with the tragic loss of a close friend. This is a thoughtful and insightful look at the world of teenagers who are deaf. Amaree is a star player on the football team who has had a remarkable run of success during his time at the school. The film does not have a narrator, letting the kids and parents tell their story, primarily by allowing us to just tag along with Amaree and his friends as they go through their senior year. Like most teens, Amaree is dealing with a lot; a girlfriend who seems distant at times, a father who abandoned his family for the life of drugs but is trying to reconnect with his son, a winning streak that is stopped by another deaf school and the death of a good friend. The film treats its subjects with kindness and respect, letting us experience almost firsthand what it is like to be deaf and the struggles the deaf go through both in school and out on the field. Audible is a moving short film that is perfect for teens and adults in a film about life, dedication, and the importance of finding your way in life, no matter what obstacles are put in your way.   My Rating: Full Price      Audible Website  Now playing on the Netflix platform.

Indiefest:  Summer of Soul  (Or When the Revolution Could Not Be Televised)   (2021)   PG-13   Documentary from Questlove (The Roots, The Tonight Show) about the legendary 1969 Harlem Cultural Festival that celebrated Black history, culture, music, and fashion. The footage of the festival has never been seen until now. This is an incredible film that really gives you the feel and the experience of seeing a vast outdoor concert series in the heart of Harlem in 1969. The film uses newsreel footage to provide you with background on what was happening in America and Harlem at that time, along with present-day interviews with both performers and audience members who were there to experience this once-in-a-lifetime event. The musical lineup is impressive with performances by Nina Simone, Mahalia Jackson, B. B. King, the 5th Dimension, and many more that include Gospel and Afro/Latin Jazz. The two performances that stand out for me are a 19-year-old Stevie Wonder not only singing like Stevie can do but also playing a powerful drum solo. And then there is Sly and the Family Stone, who blows the crowd away with their high energy, multi-cultural band playing an incredible set. Please see this in a theater; don’t watch this at home, as you need the sound of the music to envelop you and let those performances wash over you. If you do, you will come away inspired and energized with the wonder of what happened in Harlem during that Summer of Soul.    My Rating: I Would Pay to See it Again     Summer of Soul Website  Now playing in select theatres and on the Hulu platform.

Forgotten Film: King of the Gypsies (1978) R   Eric Roberts makes an impressive feature film debut as Dave, the grandson of ‘King’ Zharko Stepanowicz (Sterling Hayden), the leader of a clan of gypsies based in NYC. The King, on his deathbed, passes over his son, Groffo (Judd Hirsch), in favor of Dave. Dave is torn between his family duty, and his want and desire to join the American mainstream, but he knows that this crown cannot be denied, regardless of the opposition of his father, who is hellbent on taking over the Gypsies. King of the Gypsies is a gritty tale that at times gets a little bogged down in trying to be another ‘Godfather,’ but Roberts is so powerful and magnetic on the screen, and the cast, including Susan Sarandon, Annette O’Toole, Annie Potts, Michael V. Gazzo, and Shelley Winters is outstanding, that it makes for a compelling watch. Plus, it's always fun to watch Sterling Hayden chew up the scenery.    My Rating: Full Price      King of the Gypsies Info

Weird Credits: From the credits of The Forever Purge: Wrangler Gangboss

Coming Soon to a Screen Near You: Jolt (2021)   Lindy (Kate Beckinsale) is a woman who has a rare neurological disorder that causes her to react violently to anyone she witnesses being cruel or abusive. She is a bouncer, so that comes in handy at times, but for other times when she is in a normal situation, she has been given an electrode-lined vest that she can use to shock herself back to normalcy. After the first guy in a long time she has allowed herself to get close to is murdered, she goes on a revenge rampage while the cops pursue her as their chief suspect. Jolt looks so bizarre and weird it just might be fun to watch. We already know Beckinsale can kick, but in films (Underworld series) and the supporting cast is outstanding, including Stanley Tucci, Bobby Cannavale, Susan Sarandon, Laverne Cox, and Jai Courtney.      Jolt Website