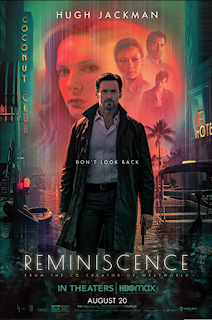 My View:  Reminiscence  (2021) PG-13   Set in the near future, Private Investigator Nick Bannister (Hugh Jackman) uses a machine to explore the past of his clients. His life is changed when a new client of his, Mae (Rebecca Ferguson), goes missing, and Nick fights to learn the truth about Mae and what happened to her. I loved the world that this film has created with Miami being flooded by rising seas and the population becoming nocturnal due to the heat, the film has a look all of its own, and I am glad I saw this in a theatre on the big screen. Unfortunately, it is all for show as the storyline is weak and drags on forever. I have always liked Hugh Jackman, but he looks uncomfortable in the role of a vet who is haunted by the war he fought and now is making his living as a P.I. There is very little flame between Jackman and Ferguson, and that is where the movie starts to fall apart because we have to believe that Jackman’s character is so in love with Ferguson’s Mae that he is willing to lose everything to find out what happened to her. I just never cared about either character and, in fact, kind of wish that the film had been about Nick’s assistant Watts, played by Thandie Newton, whose character of a sharp-shooter war vet with a drinking problem is far more interesting than Nick or Mae. At almost two hours, Reminiscence takes too long to get to the chase, and once that chase begins, I didn’t care who won.   My Rating: Bargain Matinee    Reminiscence Website  Now playing in theatres and on the HBO Max platform.

My View:   The Protege  (2021)  R  Rescued as a child by the legendary assassin Moody (Samuel L. Jackson), Anna (Maggie Q), has been brought up to be an assassin herself, becoming the world’s most skilled contract killer. When Moody is brutally killed, she goes out on her own to get revenge. This is one of those action-adventure films that you just sit back and enjoy. Have fun with Samuel L. Jackson doing Samuel L. Jackson stuff as the killer with a heart of gold. Watch Maggie Q kick serious butt and get in and out of some sticky situations. And have a blast watching Michael Keaton play the bad guy as James Bond has gone to the dark side. There is plenty of hand-to-hand combat and a few explosions to liven up the place as the plot moves along at a quick pace with not too much setup. I enjoyed The Protege for what it was, a good action film with a lot of butt-kicking.   My Rating: Bargain Matinee    The Protege Website    Now playing in theatres.

My View: Habit (2021) R  A street-smart party girl (Bella Thorne) and her friends louse the money they owe to a violent drug dealer (Josie Ho) and decide to get the money back while hiding out…as nuns. This film reminds me of the schlocky movies that used to be made for cheap that would play at the drive-ins in the 60s and 70s. With a wafer-thin plot, an over-the-top performance of Josie Ho as the demented drug lord, and an attempt to be provocative (Bella’s character at one point has sex with a good-looking priest in a confessional), this movie fails on every aspect and at times is unwatchable. Add in a bizarre cameo of Paris Jackson as a female Jesus, Gavin Rossdale, chewing up scenery right and left, and some very strange appearances by Hana Mae Lee and Ione Skye, and we have a film that will make my bottom ten list of bad films of ’21.   My Rating: You Would Have to Pay Me to See it Again   Habit Website   Now available to rent on online platforms and on DVD/Blu-Ray Aug. 24th.

My View: Sweet Girl (2021) R   Cooper (Jason Momoa) finds out that a big pharmaceutical company denied his wife a life-saving drug, and he vows to bring justice to the people responsible for his wife’s death. There are big stakes involved, and now Cooper and his daughter, Rachel (Isabela Merced), are trying to escape from the people that want to shut him up permanently. This is your ordinary action-adventure ‘on the run’ film with a few twists and turns to make it interesting. While a great deal of the action is centered on Jason Momoa, the film's real star is Isabela Merced, who has already shown us that she can be an action star in the Dora movie. Merced has a pleasing screen prescience that when even pared with a big guy like Momoa, your eye moves toward her. The film allows her to do some action sequences that are, frankly, more exciting than seeing Momoa’s fight sequences. The film does get a little messy with the plot and an ever-evolving target that Cooper and his daughter are chasing. Sweet Girl isn’t a bad action film, just one weighed down by a story that becomes very confusing on exactly who is responsible for Cooper’s wife’s death. That being said, I wouldn’t mind seeing a film with Rachel out dealing justice on her own.   My Rating; Bargain Matinee    Sweet Girl Website  Now available on the Netflix platform.

Indiefest: Demonic (2021) R   Carly (Carly Pope) hasn’t seen her mother, Angela (Nathalie Boltt), in years since Angela was put in prison for setting fire to a nursing home and killing twenty-one people. Carly finds out that her mother is in a coma, but an experimental procedure will allow Carly to visit her mother in a kind of second reality. Carly soon learns that Angela might not have been responsible for the deaths, that some sort of demon was involved, and now it has set its sight on Carly. This is one of those films that you wonder what happened to the filmmaker like Neill Blomkamp, who seemed so promising with his early work (Academy Award nomination with District 9) but has hit a wall and just doesn’t deliver the goods anymore. That is the case with Demonic, a film with an exciting start that gets bogged down in details and a plot that makes less and less sense as it goes along. Demonic is a horror film, but the scares aren’t there, with a bad guy that we don’t really meet until the end, and then it’s a big letdown. The plot is easy to figure out (even the big twist near the end) and never ramps up the tension, leaving the film any sense of horror, something a so-called scary movie needs.   My Rating: Cable   Demonic Website  Now playing in select theatres including Landmark Midtown Art Cinema and available to rent on online platforms.

Forgotten Film: Proof   (1991) R  Martin (Hugo Weaving) has been blind since birth. He takes photographs and has them developed and then has people tell him what the photograph is about. Celia (Genevieve Picot) becomes Martin’s caretaker and is obsessed with him. Andy (Russell Crowe) pops into Martin’s life and soon becomes his best friend, but Celia is jealous of their friendship and is willing to do anything to break them up. Proof is a strange little film that is helped by three outstanding and interesting performances. You don’t know where the film will end up, but it's fun watching these three actors on the screen work their magic. Add in the fact that Weaving and Crowe are so young and this is a film to enjoy.   My Rating: Full Price    Proof Info

Weird Credits:  From the credits of The Protege: Patina Artist

Coming Soon to a Screen Near You: Eternals (2021)   An unexpected tragedy forces the Eternals, an ancient band of aliens who have been living on Earth in secret for thousands of years, to come out of the shadows to reunite against mankind’s most ancient enemy, the Deviants. The film is based on a comic book series by my favorite artist, Jack Kirby, and is co-written and directed by two-time Academy Award winner Chloé Zhao (Nomadland). Add in a cool trailer and a cast that is headlined by Salma Hayek and Angelina Jolie, and this makes it a film not to be missed.     Eternals Facebook Page