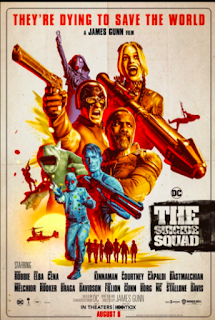 My View: The Suicide Squad  (2021)  R   The squad of misfit criminals is back on another mission that is bound to get them killed. This time, they join the super-secret and possibly shady Task Force X as they are dropped off on the remote, enemy-filled island of Corto Maltese. I will warn you from the start that this is one of the most bloody and gruesome films I have seen in a long time, and I loved every minute of it. I thoroughly enjoyed that we are dropped right into the film, with no lengthy setup or trying to explain anything. We are just shown and told that the squad of misfit bad guys have another mission that they probably won’t come back from, but a few years will be taken off their sentence if they do. Oh yeah, and that nasty bomb set inside their head will explode if they vary off of their mission. This is nothing like the last Suicide Squad film, as it has a sense of humor, lets Harley Quinn be all her lovable, crazy Harley, and there isn’t The Joker or Jared Leto to gum up the works. The action is almost non-stop, The plot is fun, and there are some great new characters, including a wonderfully deadpanned John Cena as Peacemaker and Sylvester Stallone, who steals the movie as the voice of the stupid but mighty King Shark (think giant shark with legs and a voice). I could go on and on about the cast of the fantastic group of characters that the film contains, but that would spoil the fun. And what fun it is. In the last Suicide Squad review, I said I wanted more Harley Quinn, and this film gave me her, in all her butt-kicking glory. By the way, see this in the theatre like I did because you want those special effects to wash over you and make sure to stay through all the credits as there is a bonus scene you won't want to miss.     My Rating: I Would Pay to See it Again     The Suicide Squad Website  Now playing in theatres and on the HBO Max platform.

My View: Nine Days   (2020)  R   Will (Winston Duke) is an arbiter who judges souls before they inhabit the bodies in the living. He is interviewing over a span of nine days a group of candidates who have the opportunity to be born. If they are not selected, they will be given a parting memory before their existence is erased. This is one of those films that can truly be appreciated and savored in a time of great anxiety, sickness, and conflict. Nine Days is a film that slowly moves along, letting you absorb its world and its characters. The film explores what it means to live and how we choose to experience our lives. Along the way, you meet a group of people, some of which you will root for and others you just might root against, as they examine what makes up a life and why we make the choices we do. Winston Duke is brilliant as the arbiter who has to make the tough choices, but as, we learn, those choices weigh on him and that he cares, sometimes too much about the people he both judges and watches. Nine Days is a magical movie from a director, Edison Oda, that I can’t wait to see more from.    My Rating: I Would Pay to See it Again    Nine Days Website   Now playing in theatres. 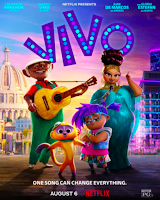 Family Faire: Vivo   (2021)  PG  Vivo (voiced by Lin-Manuel Miranda), a one-of-a-kind kinkajou, goes on a quest, with the help of a little girl named Gabi (voiced by Ynairaly Simo), to deliver a letter from his owner Andres (voiced by Juan de Marcos Gonzalez) to Andres’s long-lost love, Marta (voiced by Gloria Estefan). Too often, I am disappointed by animated films, especially ones that are musicals, with lackluster songs and stories lacking real emotions or feelings. I am happy to tell you that Vivo isn’t one of those. Instead, we get a beautiful story of a love lost and a quest to reunite that love. As you would expect, Lin-Manuel Miranda's songs are fun, full of rhymes that flow so easily, and tunes that are creative and pleasing. Vivo is a wonderful character that kids are going to fall in love with, and Ynairaly Simo does a fantastic job of not only keeping up with Miranda on the songs but has a great solo one of her own I which might be the best song of the film, though I am sure the love song that Gloria Estefan sings at the end will get some Oscar push). I loved this film and had a great time watching it, especially enjoying all the Latin and Cuban flavored songs, including a song or two from the legendary Juan de Marcos Gonzalez (Buena Vista Social Club). Join Vivo and Gabi on their quest, and you just might find yourself dancing to a toon or two in your living room.  My Rating: Full Price     Vivo Website  Now playing on the Netflix platform.

Indiefest:  Annette    (2021)  R  Henry (Adam Driver) is a stand-up comedian who falls in love with a renowned opera star, Ann (Marion Cotillard). They form a passionate couple that soon is blessed with a young child, Annette. Annette is a little girl who has an exceptional destiny in front of her and will change Henry and Ann’s lives forever. I was somewhat prepared to see this film, having just reviewed The Sparks Brothers documentary and having seen the director of the film, Leos Carax, work before (the strange and wild Holy Motors). Still, I wasn’t ready for the fact of how much I disliked Henry, a performance comic who makes antisemitic jokes, shows disdain for his audiences, and is so self-centered, he destroys lives whereever he goes. That being said, the music is brilliant and well performed, with a rousing opening number that starts in the studio and ends with the two leads taking off in vehicles on the street. The singing was done live, making the songs feel genuine and heartfelt. There is an almost lusty chemistry between Driver and Marion Cotillard (who has a lovely singing voice), which makes the film work on every level. Not everyone will enjoy this film, with such a dislikable main character, the use of an animatronic doll for most of the appearances of Baby Annette, and a shockingly abrupt ending. Still, I enjoyed this film and the performances of Driver and Cotillard. I do know one thing; I would never want to see Henry do his stand-up ever again.   My Rating: Full Price      Annette Website  Now playing in select theatre and available for rent on the Amazon Prime platform on Aug. 20th.

Indiefest: Ailey (2021)    Documentary that paints an immersive portrait of an icon, the trailblazing dance pioneer Alvin Ailey, through his own words and a new dance inspired by his life. I was very fortunate to see the Alvin Ailey dance company perform while I was in college at the University of Texas in Austin back in the late 70s. It was a unique and inspirational experience. The film wonderfully blends in a ton of interviews that Ailey did throughout his life with footage of his most famous dance creations, some as early as the late 50s, early 60s. We also get some insightful interviews about the man from the people who knew him best, his dancers, and his staff that gives you a look into the world of Alvin and the beautiful and moving work he produced. Fans of dance and of Alvin Ailey will be trilled at all the stunning dance footage that is in this film, and while Alvin was a very private person, we do get some sense of how and why he created the incredible work that he did.    My Rating; Full Price    Ailey Website  Now playing in select theatres.

Indiefest:  John and the Hole (2021)  R   John (Charlie Shotwell) is a kid growing up in a family of four, with a loving mother (Jennifer Ehle) and father (Michael C. Hall), and an older sister (Taissa Farmiga). So why would John drug his family and hold them captive in a hole in the ground? We get right from the start that John is a troubled child. He is that kid that doesn’t seem to care about anything or anybody. He lives a good life, but we can see that his family life may have some problems, with a father who would instead buy than show his love to John. John is a kid who wants to be an adult but, at the same time, not have any of the responsibilities of an adult. The movie does drag a bit at times, but I did enjoy the performances in this film, especially Taissa Farmiga, who plays John’s older sister, the one person in the family that tries to understand John and seems to care about him. We never quite get why John does what he does, and that may be the point of the film. John is a person that we may never really know or understand.    My Rating: Bargain Matinee     John and the Hole Website  Now playing in select theatres.

Forgotten Film: Death and the Maiden  (1994) R   When Paulina’s (Sigourney Weaver) husband, Gerardo (Stuart Wilson), unexpectedly brings home a guest (Ben Kingsley) to their house, Paulina believes that this man is the horror that raped her when the government-held her. I don’t want to give away too much from the film's plot as it is slowly revealed to you as the movie moves along. There is a speech by Ben Kingsley near the end of the film that makes this movie worth watching and experiencing. Plus, the film's opening is such a beautiful and moving way to begin a film that it alone is worth the price of admission.    My Rating: Full Price     Death and the Maiden Info

Weird Credits:  From the credits of The Suicide Squad: Witness Camera Wranglers

Coming Soon to a Screen Near You: Respect (2021) PG-13   The life story of one of the greatest performers we have ever had, the legendary R&B singer Aretha Franklin. Just the fact that Academy Award winner Jennifer Hudson is portraying Aretha is enough to see this film, but the cast also includes Forest Whitaker, Audra McDonald, Saycon Sengloh, Marlon Wayans, Tituss Burgess, Kimberly Scott, Marc Maron, Hailey Kilgore, and Tate Donovan, make this a must-see film.     Respect Info