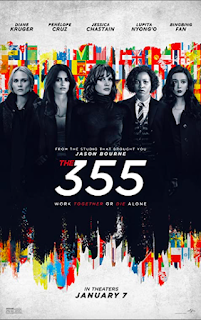 My View:  The 355  (2022)   PG-13    A top-secret weapon has fallen into the wrong hands, so CIA agent Mace (Jessica Chastain) gathers a group of international spies to help her find and defeat the mercenary that stole the weapon, while a mysterious woman tracks their every movement. First, let me say that I am a massive fan of the women who star in this film. I just wish this was a better film. I especially love Jessica Chastain, who exploded on the scene back in 2011 when it seemed she was in every movie and got two back-to-back Oscar nominations (The Help, Zero Dark Thirty). This is her film, as the film centers around her character and her production company produced the film. Chastain stated that she pitched the movie to the director as a combination of Mission Impossible and James Bond. Unfortunately, it feels a lot like those James Bond films of the 70s, where the plot didn’t always make sense, and characters magically made it to the other side of the world in a matter of hours, decked out with the latest gadgets that could do the impossible. The film tries to do too much with too little of a plot and has a few twists and turns that are surprising at all. I liked the chemistry between Chastain’s CIA agent character, Mace, and Diane Kruger’s German spy, Marie. They play off each other with a sense of humor and grit. Unfortunately, there isn’t any chemistry at all between fellow CIA agents Chastain and Sebastian Stan, who, while on a caper, decide to move their friendship into a romance. The action sequences fall flat as they feel sloppy and are not what this film needs. The film lost me when we are introduced to Chastain’s character Mace, who is supposed to be a badass but looks awkward and unskilled in hand-to-hand combat in the opening fight scene. It’s not the opening that we needed to see. And the film goes downhill from there. Maybe The 355 should have centered more around Diane Kruger’s character, whose back story is much richer, and Kruger looks like she can kick anyone’s butt in a fight.    My Rating: Cable   The 355 Website  The film is playing in theatres nationwide.

Indiefest: A Hero    (2021)  PG-13  Rahim (Amir Jadidi) is in prison because he could not repay a debt. While out on a two-day leave, he comes into some ‘found money,’ and things quickly go out of control. It’s an age-old dilemma; you find some money you desperately need, do you keep it or try to find the rightful owner? That is the start of this film as Rahim has to make that decision. After going back and forth, he decides to find the person who lost the money, and when he does, he returns it. That act of kindness at first works in his favor, but, and I won’t give too much away, his tale of how he found the money becomes a lie that explodes in the face of publicity, and Rahim goes down a rabbit hole he may never come out of. This is another beautiful, complex, and intriguing look at life from filmmaker Asghar Farhadi, who gave us the brilliant Oscar-winning film The Separation. A Hero is a story of a man whose life went downhill when technology destroyed his vocation, and he never recovered from it. A good man who, even when he does the right thing, is punished for it. It’s a tale where there is a fine line between right and wrong, and forgiveness is a hard thing to both get and give. A Hero is a sure bet to be nominated for the International Feature Film category and possibly a few more.   My Rating: I Would Pay to See it Again   A Hero Website  Now playing in select theaters and available on the Amazon Prime platform on January 21st.

Indiefest: See for Me    (2021)    Sophie (Skyler Davenport) is a house sitting in a place she has never been before, an isolated vacation home. This could be a problem because Sophie is visually impaired, but with a new app called See For Me and a helpful customer service person, Kelly (Jessica Parker Kennedy), Sophie will do just fine. But Sophie is in danger when three thieves break into the home to rob the place, and now Sophie must depend on Kelly, an Army vet, to survive the home invasion. Bad guys attack an alone blind woman is an old premise, like the 1967 Audrey Hepburn film Wait Until Dark. The difference between that film and a lot of others like it, and this film, is the main character in this film, Sophie, isn’t your usual innocent person. Sophie, we see from the start, when she tries to leave her house without her mother knowing, that Sophie has an attitude and that attitude could get her killed. Skyler Davenport gives us a Sophie who is out for herself and herself alone, willing to push the boundaries to get what she wants. The film has some great twists that I didn’t see coming, and though the ending is a little too easily put together, the film moves at a quick pace, and the action sequences are both thrilling and suspenseful as Sophie, and her See For Me helper Kelly, try to outwit and outrun the thugs who have invaded the home that Sophie is house-sitting.   My Rating: Full Price   See for Me Website  Now playing in select theatres and On Demand.

Indiefest: June Again (2020)   During a short bout of clarity from her dementia, June (Noni Hazlehurst) decides to go on the run. June is on a mission to find a family heirloom, bring her estranged family together, possibly save the family business and maybe even rekindle an old flame. This is about the impact that dementia has not only on the person who suffers from it but also on family and friends as the person they know and love slowly disappears before their eyes. The film explores, much like the Rip van Winkle tale, what would happen if someone came back five years after they left? In this case, June suddenly awakens from her dementia to find that her world has changed drastically, and being the headstrong woman who is used to getting her way, she attempts, in the limited time she has, to make things right again. June will learn that things have changed and that world has kept going on as she slept. Aided by a beautiful and moving performance by Noni Hazlehurst, June Again is a film that will touch you and will make you wonder what you would say to a loved one you have lost, who, through some miracle, would come back for a brief time.    My Rating; Full Price   June Again Website  Now playing in select theatres and On Demand.

Indiefest:   Aware: Glimpses of Consciousness   (2021)   Documentary that explores life's big questions: What is consciousness? Is it in all living beings? And what happens when we die? I wish I had seen this film in the theatre instead of watching a screener on my computer screen as there are countless shots that are breathtakingly beautiful. From scenes in a lush forest to a turtle swimming in the sea to a glorious sunset, the film shows us the world's beauty around us. This film explores the attempt to understand the mind and how not only us but all living things deal with consciousness. All the people featured in the movie have explored the idea of consciousness and how we interact with each other and the world. This is a film that explores the concept of consciousness through different viewpoints. Some of those viewpoints are scientifically based, and others are more about our connection within ourselves and our connection to the physical planet. I loved that many of the people interviewed in this film started out believing in one thing, but as time went on and they explored the idea of consciousness, their thoughts and beliefs changed. I will warn you that in the last ten minutes of the film, there is an animal sacrifice, that while is not shown on camera, is disturbing to watch. I learned a lot about how consciousness works and how we are connected to everything living in this world. We have a long way to understand where we as humans make our place in this world, but this film gives you a lot to think about and is an excellent place to start that exploration.    My Rating: Full Price   Aware: Glimpses of Consciousness Website    Now available On Demand.

Forgotten Film: Blindsight   (2006) PG   Documentary about a team of climbers that take six blind Tibetan teenagers, who have never climbed before, to climb the Lhakpa-Ri peak of Mount Everest. The team is led by blind mountain-climber Erik Weiheenmayer, the first blind person to climb the seven tallest summits in the world. This is a remarkable film about overcoming the odds, but it’s also about how blind people are treated in the world and how they see themselves in it. The cinematography is just mesmerizing, but it's the kids that make this film worth watching. Most have been made to feel like they are not a part of their community, even by their own parents, but Weiheenmayer won’t let these kids quit, believing that they can do anything that they put their minds and wills to.   My Rating: Full Price   Blindsight Info

Weird Credits: From the credits of The 355: Crowd Welfare PA

Coming Soon to a Screen Near You: The Batman (2022)   In his second year of fighting crime, the caped crusader, Batman (Robert Pattinson), uncovers corruption in Gotham City that connects to his own family while battling a criminal known as The Riddler for control of his city. With a cast that includes Zoe Kravitz as Catwoman, Andy Serkis as Alfred, and Robert Pattinson as the lead character, this is one of the most anticipated films of 2022. The only question is, will The Batman still be released in March or be pushed back due to the continuing COVID crisis.   The Batman Website