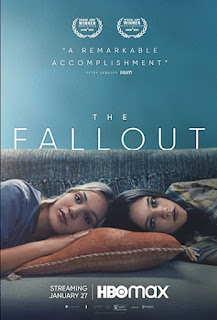 My View:  The Fallout  (2021)  R  Vada (Jenna Ortega) is your ordinary high-school student until a shooting at her school occurs. As a result, Vada has to navigate the emotional fallout in the wake of a tragedy, and her world will never be the same. Have you ever wondered what happens to the kids that survive the numerous school shootings? How did they feel afterward, and did they have trouble going back to school? In The Fallout, we get to see how Vada, a happy, bright student with a good and loving family, copes with the aftermath and how it impacts not only her life but also the students around her. Ortega, who just impressed me with her fiery performance in Scream, plays a young woman who has all the tools to recover with, but still, it’s an arduous and sometimes troubled journey back to a world that will never be the same for her or her family. The loss of innocence is the most evident in Ortega’s performance, as Vada struggles to get ‘back to normal even with all the love and support that her family and friends can muster. The Fallout is a heartfelt, powerful look at how trauma can impact a person, especially a young person who has her whole life ahead of her but can’t figure out how to deal with what her life has become.   My Rating: Full Price   The Fallout Website  Now playing on the HBO Max platform.

Familyfaire:  The Ice Age Adventures of Buck Wild  (2022) PG   The possum brothers Crash (voiced by Vincent Tong) and Eddie (voiced by Aaron Harris) are looking for adventure. Who better to lead them than your favorite weasel, Buck Wild (voiced by Simon Pegg). Consequently, with a leader like Buck Wild, what could go wrong? Just about everything. I have felt that the Ice Age films have consistently failed to do anything other than making adults very bored while only their youngest would enjoy these films. Unfortunately, this film continues that tradition. I do enjoy Buck Wild since he is a bit looney, but Crash and Eddie are two characters that get on your nerves very quickly. Small kids will enjoy the non-stop action and how stupid the two possum brothers are, but parents will be glad that they didn’t have to shell out any money to see another Ice Age film.   My Rating: Cable   The Ice Age Adventures of Buck Wild Website  Now playing on the Disney+ platform. 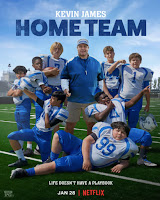 My View: Home Team (2022) PG   New Orleans head coach Sean Payton (Kevin James) has been suspended for the entire 2021 season due to his role in the infamous ‘Bountygate’ scandal. So what’s a coach going to do with all that time? How about coaching his son’s 6th-grade football team? So if you think that projectile vomiting by 12-year-olds on a football field is funny, then boy, have I got a film for you. And a running gag of an assistant coach of young kids being drunk all the time is fun, then, haha, have a laugh. Instead, Adam Sandler’s production company strikes again with an unfunny attempt at making you feel good for a coach who got suspended for having his players get paid extra for hurting the other team by having him coach kids. And along with a running gag of a hotel hot tub that makes noise (because a hot tub making noise is funny), and you have a film that goes for the easy joke every time. I think I need one of those crappy trophies that kids get for just making it through this film.   My Rating: You Would Have to Pay Me to See it Again    Home Team Website Now playing on the Netflix platform.

Indiefest: Clean   (2020)  Clean tells a story of a garbage man named Clean (Adrien Brody), tormented by a past he would like to forget, who attempts to lead a quiet life of redemption. However, Clean finds himself forced to reconcile with the violence of his past and protect a family from the mob. They don’t know who they are messing with. This film doesn’t always work, as it gets caught up a little too much into trying too hard to set a rough look to the movie with both the plot and the music. Still, Brody gives a moody and powerful performance as a man with a violent past who can’t forget his past sins. The film has a bit of a John Wick feel to it, especially when Clean starts going all out with the violence. The film takes a while to get going, and the sub-plot of a mobster dealing with his troubled son is a bit sloppy. Still, it’s fun to watch Brody on the screen, and the action sequences are well done, though bloody as all get out. I enjoyed the 2nd half of the film when the action heated up, and the ending was a fun bit of filmmaking.   My Rating: Bargain Matinee   Clean Website  Now playing in select theatres and ON-Demand.

Indiefest: Rifkin’s Festival  (2020) PG-13   An American couple, Mort (Wallace Shawn) and Sue (Gina Gershon), are at the San Sebastian Film Festival, as Sue does publicity at the event. Mort, a failed writer, believes that his wife may have the hots for a filmmaker (Louis Garrel). Having a wide range of anxieties, Mort starts up a friendship with his doctor (Elena Anaya) that may become more if Mort’s dreams have anything to say about it. Rifkin's Festival is the 49th feature film that Woody Allen has written and directed, and it feels like it is just a tool for him to let us know how much he loves European films and how much he hates Hollywood. Only in a Woody Allen film could a sad-sack guy like Wallace Shawn land not only Gina Gershon but also Elena Anaya. But then again, Woody did date both Diane Keaton and Mia Farrow, so maybe his reality is a little skewed. Allen shows us his love of European films through Mort’s dreams, where the film professor imagines himself in films from everyone from Fellini to Bergman. The dreams don’t always work, and the jokes mostly fall flat,  as this slight of a film moves along at an incredibly slow pace. I can’t say that I am looking forward to Woody’s 50th film as the last few have seemed as lost and slight as Mort’s marriage.   My Rating: Bargain Matinee    Rifkin's Festival Website  Now playing in select theatres.

Indiefest: Brighton 4th (2021)   Kakhi (Levan Tedaishvili), a legendary wrestler in his native country of Georgia, who travels to America to visit his son, Soso (Giorgi Tabidze), who has made his home in the Brighton Beach community and is about to be married. Kakhi soon learns that his son’s life is complicated by a huge gambling debt to a local mobster. It’s up to Kakhi to save his son’s impending marriage and possibly his life. Levan Tedaishvili gives a robust and nuanced performance of a man whose word is his bond. No matter how much his son messes up, Kakhi is a man who has honor and loves his son, and is willing to do anything to save him. At times funny and other times depressing, this is a film that is filled with strange and immensely entertaining characters, whether it’s Kahki and his hard-luck son or it’s the weird cast of men that the two involve their lives with. It’s a tale of immigrants who struggle to survive in a strange land, wishing they were home again but can’t. The odds are just too stacked against them. My Rating: Full Price   Brighton 4th Website  Now playing in select theatres.

Indiefest: They/Them/Us (2021)   Charlie (Joey Slotnick) and Lisa (Amy Hargreaves) are two divorced parents in their forties trying to start a new relationship. However strong their love is for each other, their lives are impacted by their four extremely complicated teenagers. Charlie and Lisa, two people who have an unhappy past, find each other and quickly, maybe too quickly, move in together, blending their two families into one big mess. Complicating things is Charlie has a new job at a Christian college that isn’t quite the fit, and Lisa has a secret; she is a dominatrix. Add in four children, all of which are quirky as heck, and you have a funny comedy with a lot of heart. I loved the chemistry between Joey Slotnick and Amy Hargreaves, making us believe that they had finally found their match, even if it has a few bumps in the road. The supporting cast of teens is fun, and I loved Lexie Bean as Lisa’s daughter, who wants to be known as ‘They’ instead of her given name of Maddie. They/Them/Us isn’t your ordinary family comedy, and I am okay with that.   My Rating: Full Price   They/Them/Us Website  Now playing in select theatres.

Forgotten Film: Volver (2006) R  A mother (Carmen Maura) is a ghost that has come back into her daughter’s lives to help them from the afterlife. That’s basically the plot of this wonderfully weird and funny film. Penelope Cruz bursts on the scene with this film, and it’s a wondrous role as the plot has a killing that is covered up, with some Hitchcock touches, a ghost, and a perfect cast.   My Rating: I Would Pay to See it Again   Volver Info

Weird Credits: From the credits of The Fallout: Digital Intermediate Producer

Coming Soon To A Theatre Near You:   Big Gold Brick (2022)   After Floyd Devereux (Andy Garcia) hits fledgling writer Samuel (Emory Cohen)with his car, Floyd decides to take Samuel to his home to help him write his biography. Samuel is about to meet a family with a few problems, or do they? The cast includes Megan Fox, Lucy Hale, and Oscar Isaac, and the trailer makes this film look like it will be a blast to watch.   Big Gold Brick Info