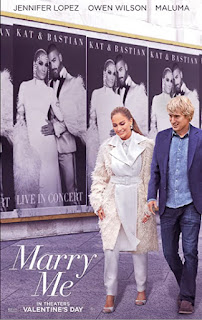 My View:  Marry Me (2022) PG-13  Music superstars and power couple Kat Valdez (Jennifer Lopez) and Bastian (Maluma) are about to be married in the event of the year. Seconds before the big event, Kat finds out that Bastian has cheated on her. As a result and before a live audience, Kat locks eyes with a stranger in the crowd, Charlie (Owen Wilson), and decides right then and there to marry him. For fans of Jennifer Lopez, this will be a dream come true as she sings what seems like every five minutes and has more costume changes than possible anyone ever on-screen. That given, this is a classic rom com plot of two very different people being pushed into a situation, and loves comes from that unexpected place. I am not a big fan of Owen Wilson, but he makes this film work. His Charlie character makes you want to root for this couple, bringing a sweetness and innocence to the role that is very believable, and you can see why Kat falls for him. I loved the chemistry between the two stars, and their playful back and forth seemed genuine and was one of the best things about this film. Sure the plot is easy to figure out, but that’s what we love about this type of movie, plus we get a lot of Jennifer Lopez songs to get up and dance to.   My Rating: Bargain Matinee   Marry Me Website  Now playing in theaters nationwide and on the Peacock platform.

My View: I Want You Back (2022) R   Peter (Charlie Day) and Emma (Jenny Slate), who meet by chance on a day that both of them got dumped. Therefore, they decide to become a team to get back the ‘loves of their lives by breaking up their old partner's new relationships. What could go wrong? Since it’s almost Valentine’s Day, it's time for a good and very funny romantic comedy with two dynamic stars. Day is perfect as your likable everyman, and Jenny Slate is terrific as the quirky Emma, a woman who will do just about anything to get her man back. I Want You Back is a hilarious movie, mainly because Day and Slate have such great comedic timing and are just out and out hilarious. The supporting cast of Gina Rodriguez as Peter’s ex-girlfriend and Scott Eastwood, as the hunky ex-boyfriend of Emma, are fine in their roles but are there really just to be window dressing for the antics of Day and Slate. I loved this film and had a blast watching Charlie Day and Jenny Slate get into so much trouble trying to get their lovers back while slowly falling in love with each other.   My Rating: Full Price   I Want You Back Website  Now playing on the Amazon Prime platform.

Indiefest: The Sky is Everywhere (2022) PG-13    Lennie (Grace Kaufman), a musical prodigy high-school student, has lost her love for music because her older sister, Bailey, has died. Surprisingly, when she meets a new student, Joe (Jacques Colimon), a fellow music lover, things start looking up. However, everything gets complicated when Bailey’s grieving, devastated boyfriend Toby (Pico Alexander) shows up, and Lennie starts bonding with him. This film has a lot of tropes that make up the typical Young Adult romance. The quirky best friend (Grace Kaufman) is there to boost Lennie when things are down. The strange but kind relatives (Jason Segel, Cherry Jones) who only want what’s best for Lennie. The evil and mean rival (Julia Schlaepfer) who is always a thorn in Lennie’s side. And the two possible loves of Lennie: the perfect guy (Jacques Colimon) who falls for Lennie even though he could have any girl in the school and the bad boy Toby (Pico Alexander), who is suffering a loss just like Lennie. What makes this different from your ordinary YA romance is that we get to experience what Lennie is feeling through her thoughts in her mind. When Lennie first meets Joe, she falls over backward, blown away by his playing, or when they play a duet, as they fly above the crowd as people dance below. It’s those beautiful, magical moments where we get to experience the joy or sorrow that Lennie feels that make this film worth watching. My favorite scene is where Lennie is struggling with the loss of her sister, and as she talks on the phone, everyone around her is struggling too. Whether it’s the guy who drops his ice cream cone, or the man who can’t get his papers back into his briefcase, everyone around her in Lennie’s world is struggling with life just as much as Lennie is.   My Rating: Full Price    The Sky is Everywhere Website  Now playing in select theatres and on the Apple TV+ platform. 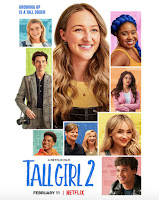 My View: Tall Girl 2 (2022) TV-PG  Your favorite ‘tall girl,’ Jodi (Ava Michelle), is back! Now that Jodi has everything going for her with a boyfriend and is suddenly popular in school, it would seem that things would be great. However, being popular can cause problems, especially when the new guy (Rico Paris) in school shows an interest in you. I liked the first Tall Girl film, which, while not a great movie, was charming and had a winning start in Ava Michelle. This sequel doesn’t match the first film's charm and feels like they are pushing the boundaries to make a lot out of very little plot. Michelle still gives us someone to root for, and we get to see her dance a couple of times, which is an added bonus. I just wish there had been a little more to the plot to keep my interest, though I think the younger crowd may enjoy it.   My Rating: Bargain Matinee   Tall Girl 2 Website  Now playing on the Netflix platform.

Indiefest: The In Between (2022) PG-13   Tessa (Joey King) is trying to piece her life back together after surviving a horrible car accident that took her boyfriend's life. Although heartbroken, Tessa suddenly realizes that Skylar (Kyle Allen) is trying to reconnect with her from the afterworld. In the film, we go back and forth between what happened before the accident, giving us all the adventures into love between Tessa and Skylar and the events after the accident, when Tessa starts getting what she thinks are messages from Skylar from the beyond. I liked but didn’t love this film about a young woman whose troubled past gets in the way of her loving someone now. Like many teen romance films, Skylar is the perfect boyfriend, with his only fault, trying to do the right thing for everyone. Tessa is the typical teen romance woman who can’t commit fully to the relationship because she has been hurt in the past. Add in the fact that Skylar is trying to contact Tessa from the afterlife, and Tessa is willing to risk her life to see him one last time, and you get a film that seems to fit all the base but never hits at the heart enough for us to care.   My Rating: Bargain Matinee    The In Between Website  Now playing on the Paramount + platform.

My View: Kimi (2022) R Angela (Zoë Kravitz) is a highly-skilled tech working on the latest voice-controlled AI called Kimi. Angela works from home because she has agoraphobia, making it almost impossible for her to leave her home. While fixing the AI’s system, she gets an audio file that she thinks maybe a recording of an assault. Taking a bit from Hitchcock’s Rear Window, along with a few other suspense films, filmmaker Steven Soderbergh gives us a thriller about the perils of a world dominated by devices that we now own and depend on. The film is a fun ride, with a few twists and turns that make it exciting, and Kravitz is great as the strange set in her ways Angela. Kimi speeds up a bit at the end, making it feel a bit rushed to get to the big ending, but it has a very satisfying conclusion.   My Rating: Full Price   Kimi Website  Now playing on HBO and the HBO Max platform.

Forgotten Film: Light Sleeper (1992) R   John (Willem Dafoe) is a drug dealer who has been serving the same clients for years. He used to do drugs but has been off them for a few years. He starts thinking about quitting the business when his boss (Susan Sarandon) keeps talking about going into a legit line of work. He then meets Marianne (Dana Delany), his one true love who left him a few years ago to get clean herself. Marianne wants nothing to do with John, as she is afraid she will go back to her old ways. Dafoe gives a sobering, gut-wrenching performance as we go deep into the world of drug addiction and the lives that it destroys.   My Rating: Full Price     Light Sleeper Info

Weird Credits: From the credits of I Want You Back: Lead Zone Monitor

Coming Soon to a Screen Near You: The Bad Guys (2022) PG A gang of criminals led by Mr. Wolf (voiced by Sam Rockwell) decides to turn a new leaf and go good, but it will be more challenging than they think it will be. The voice cast looks outstanding with Marc Maron, Awkwafina, Anthony Ramos, Craig Robinson, and Alex Borstein and the trailer looks like this could be a fun time.     The Bad Guys Website

Email ThisBlogThis!Share to TwitterShare to FacebookShare to Pinterest
Labels: I Want You Back, Jennifer Lopez, Jenny Slate, Kimi, Light Sleeper, Marry Me, Tall Girl 2, The Bad Guys, The In Between, The Sky is Everywhere, Zoe Kravitz