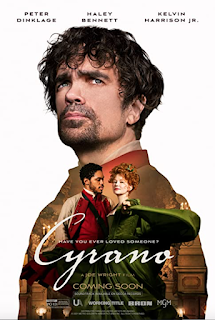 My View: Cyrano (2021) PG-13   The legendary story of a wordsmith and master swordsman, Cyrano (Peter Dinklage), who falls madly for the lovely Roxanne (Haley Bennett). Despite being in love with Roxanne, Cyrano is too full of self-doubt to make a move but then is enlisted by the dashing Christian (Kelvin Harrison, Jr.) to woo her with letters that Cyrano writes for Christian. Cyrano de Bergerac is one of my favorite plays and has been brought to the screen numerous times, including some of my favorites of all time: Love Letters (1945), Cyrano de Bergerac (1950), Electric Dreams (1984), and the classic Steve Martin romantic comedy Roxanne (1987). So, accordingly, I fell in love with this version of Cyrano, a musical starring Peter Dinklage, who, instead of the enormous nose making Cyrano feel that he is not worthy of Roxanne’s love, it’s his size that causes his doubts. This version of Cyrano is a musical with a score written by members of the Indie-rock band The National. While not a great singer, the songs in the film allow Dinklage to half-sing, half-speak the songs, but this makes for a more mournful and soulful Cyrano, as he pours out his heart for a love lost. Dinklage is one of those performers who commands your attention, and he does this with an ease that makes him seem effortless on the screen. Haley Bennett is superb as the lovely Roxanne and Kelvin Harrison, Jr. belts some of the film's best songs as the tongue-tied Christian. I thoroughly enjoyed this revisit to an old friend about a man who sacrifices his happiness for what he thinks will make the love of his life happy, only to be disappointed by the cruel turn of events.   My Rating: Full Price  Cyrano Website  Now playing in theatres nationwide.

My View:  Studio 666  (2022) R   Dave and the rest of the Foo Fighters are looking for the perfect place to record their much-anticipated 10th album. Finally, they have found the ideal location, a mansion in Encino that is steeped in rock and roll history. However, there is one problem: supernatural forces threaten to take over their lives. If you are a fan of the Foo Fighters and have enjoyed their music videos, you will have a good time watching this film. Based on a story written by frontman Dave Grohl, a huge horror fan, the film is a take on the haunted house theme, with an evil force possessing Grohl for mayhem and gore. The film is a takeoff on all the low-budget slasher films you have seen, with each new death bloodier and grosser than the last one. The film is funny, but it overstays its welcome by at least 30 minutes, and I got tired of the seemingly endless plot, as the killings keep going long after I thought it was fun. The band looks as if they were having a blast and a lot depends on if you like Dave and his tendency to overact. If you're not a fan, you might want to skip Studio 666 and maybe try something like The Cabin in the Woods (2011) or Tucker and Dale vs. Evil (2010) instead.   My Rating: Bargain Matinee  Studio 666 Website  Now playing in theatres nationwide.

In Memory of Ed Wood (A Movie I've Only Seen in Trailers But Just Looks Like a Bad Idea): A Day to Die  (2022) R   After killing a drug syndicate member while protecting a parolee, Connor (Matt Dillion) has one day to pay two million dollars in reparation. He enlists his old military ops crew, led by Brice Mason (Bruce Willis), to steal two million dollars. Anything these days with Bruce Willis on the movie poster is a bad sign. Willis is making a ton of these direct-to-video movies where he comes in, acts for a day or two, and then departs, making the film basically a walk-on for him, and the rest of the film is an action film without its star.    A Day to Die Info

Forgotten Film: Nobody's Fool (1994) R  Sully (Paul Newman) is a man in his 60’s who has lived a carefree life. He has a job as a construction worker, lives in a rented apartment, and gets by because he is charming and good-looking. He spends most of his days drinking beer at a local watering hole and flirting with his boss's wife (Melanie Griffith). Then in walks his son, Peter (Dylan Walsh), going through a messy divorce and has moved back to his hometown. Now, Sully must confront the past he has long ignored. Newman was one of those actors who could do incredible things with very little. Newman’s Sully is a man who, though full of faults, is someone you still root for. It’s that easy-going charm that Newman fills the screen with as no one else can. Nobody's Fool is a film that lets Newman fill with his presence, and it's a performance that is one of his best, especially of his later career. The cast is outstanding, including Bruce Willis as Sully’s boss and Jessica Tandy as Sully’s landlord (and old 8th-grade teacher), but it’s Newman that makes this film work and worth watching.   My Rating: Full Price    Nobody's Fool Website

Weird Credits: From the credits of Cyrano: Action Prop Buyer

Coming Soon to a Theatre Near You: The Unbearable Weight of Massive Talent (2022)   A cash-strapped Nicolas Cage (yes, that Nic Cage) has agreed to make an appearance for 1 million dollars at a billionaire’s (Pedro Pascal) birthday party. It gets complicated when Nic learns that the billionaire is not only a fan but is a drug kingpin. OK, Nic Cage is playing himself, so this could go one of two ways: a heck of a lot of fun or a huge mess. Either way, it will be worth seeing for this Cage fan.      The Unbearable Weight of Massive Talent Website