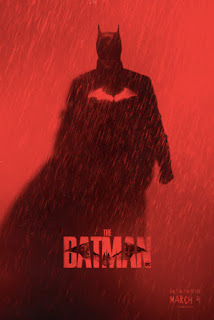 My View: The Batman  (2022) PG-13  The Batman is about the Caped Crusader, Batman (Robert Pattinson), in his second year of fighting crime, uncovering corruption in Gotham City that connects to his own family while battling a criminal known as The Riddler for control of his city. When I was a boy, my favorite comic book character was Batman because he wasn’t a person with superpowers, but he used his gadgets and mind to solve crimes. Like the other hero of my childhood, Sherlock Holmes, Batman solved crimes using his intellect. What filmmaker Matt Reeves has brought us a Batman who is fighting a losing battle for control of a city that he loves. Pattinson is brilliant as the brooding crime-fighter trying to figure out who is killing the city’s most important and influential powerbrokers, as each gruesome killing is left with a riddle in a greeting card. Zoë Kravitz lights up the screen as Selina Kyle, Catwoman, who enlists The Batman to help her find her missing lover/roommate. Even so, it’s Paul Dano, who steals the film with his performance as The Riddler. For most of the film, we only see The Riddler in videos he releases, as he hides behind an odd bit of masking. Dano is scary as the mad, evil Riddler, who leaves clues for Batman at every murder he has committed. The Batman is not an origin story. We don’t get the usual flashback to when Bruce Wayne’s parents were murdered before his eyes; instead, this is a Batman that we already know, a crime-fighter battling his own demons as he takes on the worst of humanity. And know this: you will not recognize Colin Farrell as The Penguin. It is a fantastic bit of screen magic with The Penguin looking more like a gangster than the quacking cartoon character of other Batman films. I will warn you that you will want to hold off on drinking anything before or during the film as the running time is almost 3 hours in length, and you won’t want to miss anything on the screen to take a pee break. And yes, the film sets up another Batman film, and of course, there is a tiny surprise at the end of the final credits. So go on a journey with the Batman to solve crimes and defeat the criminals that threaten his beloved Gotham City.    My Rating: I Would Pay to See it Again   The Batman Website  Now playing in theatres nationwide.

My View: Fresh (2022) R    Noa (Daisy Edgar-Jones) is tired of the dating scene and has given up trying to find a good guy until she meets Steve (Sebastian Stan), a charming guy who seems to be perfect. However, Noa is about to discover that dating can be horrible, even horrific. With an opening credits scene that doesn’t start until 30 minutes into the film, you know you are in for something different. Let’s just say that Steve isn’t who or what he says he is and that Noa is in a lot of danger. To say that this film has a big twist in it would be an understatement, and some viewers will give up when they encounter that twist. Still, if you have the stomach for it, the rewards are worth it. With two outstanding performances by Sebastian Stan, as the ever-charming Steve and Daisy Edgar-Jones as the down on dating Noa, who becomes our fearless hero, Fresh is a strange and wonderful film full of surprises. It is more commentary on dating and the power of relationship dynamics than a horror film. But don’t kid yourself; it can be pretty horrific. You may never look at a ‘meet cute’ get-together the same way again.   My Rating: Full Price  Fresh Website  Now playing on the Hulu platform. 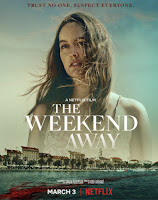 My View:  The Weekend Away  (2022)   Beth (Leighton Meester) is on a weekend vacation, far from her husband and baby, to visit her best friend Kate (Christina Wolfe) in Croatia. After a night of partying, Beth discovers that Kate has been murdered. Consequently, Beth is in a foreign country with no friends, the main suspect for Kate’s death, and no way of knowing what happened. The Weekend Away is a standard murder mystery that is helped by an excellent performance by Leighton Meester, playing a woman who is taking a break from her family to party with her best friend. Meester is the only thing that saves this from becoming your ordinary basic cable mystery. The story is as old as Lifetime has been making movies, with a plot of a woman who can’t remember what happened after a night of partying and her friend disappearing. Add into the plot with your usual fear tactics thrown in about our hero all alone in a foreign country, having to trust a stranger, and the deck continually stacking against her. There are a few twists to the story, but anyone who has seen any number of true crime stories on TV can figure out who the killer is by the time our hero does. Is it worth an afternoon on a weekend to watch? Sure, but don’t expect much.   My Rating: Bargain Matinee   The Weekend Away Website  Now playing on the Netflix platform.

Indiefest: Lucy and Desi    (2022)  PG  This documentary explores the life and love of Lucille Ball and Desi Arnaz, who became one of the most prolific power couples in entertainment and changed TV forever. I will admit that I have never been a fan of I Love Lucy. I didn’t enjoy the characters, the wacky situations, and the constant mistrust between Lucy and Desi. While I admired Lucille Ball’s ability to make any scene funny, I just never was a big fan of the series. Having watched this outstanding documentary from Amy Poehler, my admiration for Lucille Ball has grown. Poehler utilizes home movies and tape recordings that Lucy made during her lifetime to give us an inside look at a couple that changed the way TV was produced and had such an impact on network television. So much so that it is still using the model that Lucy and Desi created, both in front and behind the camera. Lucy's fans will go nuts with all the behind-the-scenes photos and home movies (in glorious color the see that flaming redhead)  along with the amazing bits of publicity photos and films that were made during their careers. The film doesn’t just concentrate on Lucy but gives Desi a much-needed run in the spotlight, letting us see the man who was a driving force behind the scenes of what became a TV-producing machine that dominated the TV landscape for years. The film doesn’t put the blame on one person for the marriage falling apart. The film makes it clear that both parties had faults that made the marriage doomed from the start. That’s made even more evident when both Lucy and Desi found a second love that they spent the rest of their lives with. Lucy and Desi is a brilliant documentary about a couple whose love and partnership changed how people watched television. It is also a love story that will bring you much laughter and a few tears, just like their groundbreaking show did.    My Rating: Full Price   Lucy and Desi Website  Now playing on the Amazon Prime platform.

Indiefest: After Yang   (2021) PG  In the near future, a family deals with the breakdown of their A.I. helper named Yang (Justin H. Min). Jake (Colin Farrell) searches for a way to get Yang repaired, who has become an integral part of their family and Jake’s daughter’s beloved companion. Jake will soon discover that this life is full of wonder and revelations. This is a film about love, loss, and what it means to be a parent. Jake goes on a quest first to find a way to get his A.I. helper Yang repaired. Finding roadblocks after roadblocks, he gives up in his quest to restore Yang, and instead, discovering a secret memory chip in Yang, Jake goes on a journey to find out what made Yang who he was. After Yang is a film about a family and how its dynamic is threatened by the loss of a loved one, even if that person is a robot. Yang is an essential part of the family; part teacher, part nanny but most of all, a friend who helps the family discover things about themselves. After Yang is a powerful and meaningful film about a family that learns how to reconnect with each other after depending on someone else to do the connecting. Incredibly, this film is being released the same week that Colin Farrell gives an entirely different performance as The Penguin in The Batman. In After Yang, Farrell provides us with a man in Jake who has lost his way but finds his place back in his family by discovering what made Yang so unique. And by the way, the opening credits of the film make it worth the price of admission by itself.   My Rating; Full Price    After Yang Website  Now playing in select theatres.

Indiefest: Huda’s Salon (2021)  PG  Reem (Maisa Abd Elhadi) is a Palestinian woman with a newborn and an abusive husband. Reem's life changes forever on a routine visit to her hairdresser, Huda (Manal Awad). This is a film about two stories. One is the tale of a woman who is being blackmailed, and the other is the story of the blackmailer. In both cases, the two women are stuck in impossible situations, with nowhere to go and no one to turn to for help. Both women are tools of a system that keeps feeding on itself in a war that no one can win. Huda's Salon is a psychological thriller where you have no idea if or when these women can escape from their predicaments, and you realize that even if they do escape their present situation, their lives will never be the same. Of the two actresses, Abd Elahid, as Reem, the innocent mother who finds herself in an impossible situation, gives the better performance of a woman who looks for help but can only find that help from within.   My Rating: Full Price   Huda's Salon Website  Now playing in select theatres.

Forgotten Film:  Paperhouse   (1988)  PG-13   A lonely young girl (Charlotte Burke) draws a house with a young boy in a window. She then has a dream where she visits the boy, a boy who is disabled. The more she draws and dreams, the more she becomes immersed in a world that she may never escape. Paperhouse is a fascinating and lovely film about imagination and dreams and how they can come true and is one of those films that once you see it, it will stay with you a long time.   My Rating: Full Price    Paperhouse Info

Weird Credits: From the credits of The Batman: Virtual Reality Illustrator

Coming Soon to a Screen Near You: Umma (2022) R  Amanda (Sandra Oh) and her daughter (Fivel Stewart) live on an isolated farm, raising bees without modern technology. Their world is shaken when Amanda receives the cremated ashes of her estranged mother, and their lives are taken over by a restless, evil spirit that will stop at nothing to come back. Sandra Oh in a horror film? Count me in!    Umma Info