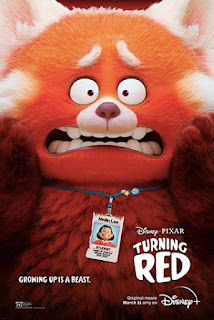 Familyfaire: Turning Red  (2022) PG   Mei Lee (voiced by Rosalie Chiang) is a 13-year-old who has her best friends always at her side, and unfortunately, her overbearing mother, Ming (voiced by Sandra Oh), watching her every move. It’s bad enough to be a teenager, but suddenly, Mei Lee is turning into a giant Red Panda every time she gets excited. What’s a girl to do? I am a huge fan of Pixar, as they constantly bring us films that are funny warm and make you think about your place in the world. Turning Red is about puberty, an event that, when growing up, no one ever warns you about but hits everyone with a bang. In this case, Mei Lee is hit with a curse that turns her into a big Red Panda when she gets overly excited, something hard to avoid when your body and mind are put into overdrive by puberty. This is a beautiful, brilliant, and laugh-out-loud film that gives us a profound look at a young woman who survives the heartbreak and stress with the help of her family, friends, and maybe just a little help from a boy band. Filmmaker Domee Shi gives us a tale that, like Mei Lee, is both unique and relatable at the same time, one that will be treasured.    My Rating: I Would Pay to See it Again   Turning Red Website  Now playing on the Disney+ platform.

My View: The Adam Project  (2022) PG-13   A time-traveling pilot (Ryan Reynolds) teams up with his 12-year-old younger self (Walker Scobell) and his father (Mark Ruffalo) to stop time travel and save the Earth from destruction. First, let's give Netflix some props for putting together one of the most likable casts ever with a group including Ryan Reynolds, Mark Ruffalo, Jennifer Ganer, Catherine Keener, Zoe Saldana, and Walker Scobell. The film lets Reynolds riff like we know he can, but he has met his match in Walker Scobell, who plays Reynolds's younger self as the wise-cracking young Adam, a kid who makes up for his lack of size with his wit and humor. Scobell is perfect in the role of the young Adam and is able to keep up with Reynolds, making their interactions the best part of the film. Keener is a bit wasted as the villain of the piece, and it’s never quite clear what her master plan is, but the film moves a such a quick pace, with quips flying across the screen, that you probably won’t notice it. I thoroughly enjoyed the fact that the film constantly makes fun of sci-fi tropes like the multiverse, and the sacred timelines from the future can’t intersect with the past. It helps that Zoe Saldana comes in to kick some butt while giving us a romantic partner for Reynolds to pine after. While not a great film due to its rather flimsy plot, it's a blast to watch because Reynolds and Scobell are having such a fun time trying to save us from the evils of time travel.   My Rating: Full Price   The Adam Project Website  Now playing on the Netflix platform.

Indiefest: All My Friends Hate Me  (2021) R  Pete (Tom Stourton) reluctantly goes on a birthday weekend trip with his old college crew. Soon, Pete notices that his friends are slowly turning against him. Is he being punished, paranoid, or is this some sort of sick revenge for something he did in the past? This is one of those films that will take me a while to figure out if I liked it, but I'm glad I did watch it. Part horror film, part dark comedy, it's a film that you, like Pete, are trying to figure out if Pete’s friends are just out and out mean, or is it all in Pete’s mind? All My Friends Hate Me is a film that plays on our expectations of how things should go versus how things turn out. Is it Pete’s fault for feeling his friends don’t like him, or are they truly turning against him? You won’t find out until near the end, but it’s worth the experience the get the answer.   My Rating: Full Price   All My Friends Hate Me Website  Now playing in select theatres.

Indiefest: Tyson’s Run (2022) PG   Tyson (Major Dodson) is a teen with autism who, up to now, has been home-schooled by his mother (Amy Smart). He decides to go to the high school where his father (Rory Cochrane) is the football coach. To try to be close to his father and with the help with a fellow student (Layla Felder) and a professional runner (Barkhad Abdi), Tyson decides to run a marathon. It’s a decision that will change Tyson and his family forever. I have a soft spot in my heart for films like this, a movie that doesn’t quite deliver but is so earnest in the attempt. Tyson’s Run is a story that never get the tug on the heartstrings that it needs and a plot that is incredibly thin in its story. The film is helped by a strong performance by Amy Smart, as the mother who believes in her son, and a welcomed performance by Barkhad Abdi, who plays a former professional runner who takes Tyson under his wing. The film has an ending that pushes reality to almost a breaking point, but it’s a movie with a good heart. I just wish the writing was better.   My Rating: Bargain Matinee   Tyson's Run Website  Now playing in theaters nationwide.

Indiefest: Compartment No. 6 (2021) R  An archeology student from Finland, Laura (Seidi Haarla), is taking a train all the way up to the arctic circle in Russia to visit an archeological site. Unfortunately, on this long train trip, she has to share a tiny sleeping compartment on the train with a gruff Russian stranger, Ljoha (Yurly Borisov), with whom she has nothing in common with. Hollywood has been making this story for as long as movies have been around; the two strangers, who have no common ground, and against the odds, find love and friendship with each other. Except, in this case, the two characters, unlike most Hollywood tales, aren’t very likable and at no time during this film do we believe that they should be together. What makes this film worth watching is just that; two characters that shouldn’t be together stuck on a long train ride in cramp quarters and through their time together, find out that maybe, just maybe, they have something in common that they can share with each other. Hollywood would have turned this into a rom-com, a film full of laughs and a happy ending. However, Finnish filmmaker Juho Kuosmanen gives us a more realistic movie, with two unhappy, ordinary people finding common ground to connect with long enough to survive a brutal trip into the unknown. My Rating; Full Price   Compartment No. 6 Website  Now playing in select theatres.

Forgotten Film: Ironweed (1987) R   In 1938 Albany, New York, two lost souls, Francis (Jack Nicholson) and Helen (Meryl Streep), find each other, and for a time, that is enough until the sins of the past come back. This is a hard film to watch as Streep and Nicholson, at the height of their acting profession, play two alcoholics who use liquor to hide from their past. Francis is haunted by the deaths he has caused, and Helen is tormented by what she could have become. It’s a film filled with two performances that will astound you and make you shake your head in despair. Streep’s performance is one of her best, and her entrance, thirty minutes into the film, is jaw-dropping. Ironweed is a film that you probably will only watch once, but it is one that will long stay with you.   My Rating: Full Price   Ironweed Info

Weird Credits: From the credits of Turning Red: Sweatbox Manager

Coming Soon to a Screen Near You: The Twin (2022) A mother (Teresa Palmer) is still grieving for her dead son when the surviving twin starts acting strange around her. She must now confront the unbearable truth about her surviving son. I am a fan of Teresa Palmer, and I hope that this horror film will give us a scare or two.   The Twin Info