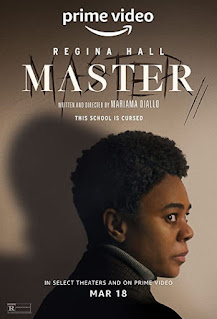 My View: Master (2022) R  Gail Bishop (Regina Hall) has been named dean at a prestigious New England university, the first Black dean in the school’s history. Jasmine (Zoe Renee) is a new student at the university, and she learns that the students at this school believe that the campus is haunted. Both Gail and Jasmine aren’t just dealing with systemic racism at the university because there is something far more sinister in these hallowed halls. Something that could prove deadly. This is not your ordinary horror film as it only makes up half of this film’s content. The other half is about racism, white privilege, and how institutions of high learning are more about politics and less about higher education. The film follows two stories connected by a sinister force that is alive and well on the campus; the question is, is it a supernatural force, or is it just underlying racism that hides under the surface. I liked this film for the first two-thirds, but then the storyline fails to come to a satisfying ending, leaving me wanting more from its resolution. The film doesn’t quite deliver on the scares, and I didn’t think the character of Jasmine was ever in mortal danger that the film wants you to feel that she is in. Still, there is quite a bit that you will be discussing afterwards about this film and its subject matter.   My Rating: Bargain Matinee   Master Website   Now playing in select theatres and on the Amazon Prime platform.

Indiefest: The Outfit  (2022) R  Leonard (Mark Rylance) is an English tailor who used to work on London’s Savile Row. After a personal tragedy, Leonard now makes his home in Chicago, in a part of town where only mobsters can afford his hand-crafted suits. Basically, all Leonard wants to do is be left alone to make clothes with his assistant (Zoey Deutch), but his life is about to get complicated when two killers show up on his shop’s doorstep. This is an absolute thrill ride of a film where you are kept guessing until the end. Buoyed by a brilliant performance by Mark Rylance and a script that values words more than actions, this film is a mystery inside another mystery. It slowly peels back its layers of plot woven together better than any other fine suit that Leonard constructs. The Outfit is a film that lets Rylance show us just how good an actor he is, giving us a far craftier and wise character than the people around him. I can’t tell you how much fun I had watching this film, making me think of some of the great Hitchcock films of the 30s and how a character can get them in and out of impossible situations, taking us along for the thrilling ride.   My Rating: I Would Pay to See it Again   The Outfit Website  Now playing in theatres nationwide.

My View: Deep Water (2022) R Vic (Ben Affleck) and Melinda (Ana de Armas), on the surface, have the perfect marriage. However, both love to play mind games, and their marriage is holding on by a thread. Vic allows Melinda to take any number of lovers, as long as she doesn’t desert her family. Their marriage is about to fall apart when one of Melinda’s former lovers is discovered murdered. While I don’t think this is a great film, I still enjoyed going on this weird, strange, and sometimes horrifying journey with two very messed-up people. Directed by Adrian Lyne (Flashdance, 9 1/2 Weeks, Fatal Attraction) and based on a book by Patricia Highsmith (The Talented Mr. Ripley), this is a mystery/suspense film about two people who are in a twisted and peculiar relationship. The film is sure to be compared to Gone Girl (2014) and possibly the Harrison Ford film Presumed Innocent (1990), this film is about two people who are in a relationship that is complicated, messy, and dangerous. Affleck and de Armas portray to beautiful people that do very ugly things to each other. This film takes a lot of twists and turns, with you wondering if you saw something that was real or fantasy until the very end.   My Rating: Bargain Matinee   Deep Water Website  Now playing on the Hulu platform.

Familyfaire: Cheaper by the Dozen (2022) PG  Zoey (Gabrielle Union) and Paul (Zach Braff) are parents of a large blended family, the Bakers. Whoever thought living in this family of 12 would be easy thought wrong. This is the third version of Cheaper by the Dozen. The first is an excellent classic film from the 1950s that stars Clifton Webb. The second was a mildly funny film starring Steve Martin from the 90s. And now we have a modern-day version that is painful to watch. Incredibly dull, not a bit funny, and so long it seems to last for days, this version is an attempt to pack a lot into a film that doesn’t work as a comedy or as a commentary on race relations. Add into the mix some horrible acting by some of the kids and a script that is so poorly constructed I almost got whiplash from the events of the film (the family goes from barely paying their bills to a mansion in an exclusive neighborhood in a matter of days) and you have a film that is just dull to watch. Go watch one of the latest animated films from Disney or the wonderful Mitchells vs the Machines if you want some family fun because this version of Cheaper by the Dozen doesn’t even come close to being entertaining.   My Rating: You Would Have to Pay Me to See it Again   Cheaper by the Dozen Website  Now playing on the Disney+ platform.

Forgotten Film: White Fang (1991) PG  The story of a young man who goes to the Yukon to find gold and a dog who was raised by wolves. The two find each other in the wilds of Alaska and make a great team to survive the wilderness together. I loved this book as a kid, and though the film doesn’t quite match the book in the storyline, it’s still a great adventure film. I think we forget just how good an actor Ethan Hawke was at such an early age. The film is one of the better wilderness action films and has a dog you will fall in love with. What more could you want?   My Rating: Full Price    White Fang Info

Weird Credits: From the credits of The Outfit: Rushes Runner

Coming Soon to Screen Near You: The Northman (2022) R A Viking prince (Alexander Skarsgard) has come back to avenge his father’s death and rescue his mother. From filmmaker Robert Eggers (The Witch) comes an epic tale with a cast that includes Nicole Kidman, Ethan Hawke, Willem Dafoe, and Anya Taylor-Joy. Add in Bjork as a character named Seeress, and you have a movie that could be really interesting to watch.    The Northman Website