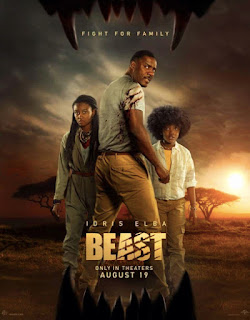 My View: Beast (2022) R A father (Idris Elba) and his two teenage daughters (Iyana Halley, Leah Sava Jeffries) are in the African Savannah to go on a photo safari. Instead of a fun outing, they encounter a rouge lion determined to show that there is only room for one apex predator. So it’s man vs. beast, or should I say Elba vs. CGI? With some dialogue that seems to be right out of a bad TV soap and a CGI lion that doesn’t always look real, this film is a bit of a disappointment. There are some cool action sequences, but you can’t overlook that the last third of the film feels very contrived and goes to an ending you can see from a Savannah away. I just wanted more thrills and scares from Beast; instead, I got a few roars and a lot of whimpers.   My Rating: Bargain Matinee Beast Website  Now playing in theatres nationwide.

My View: Look Both Ways (2022)   On the eve of her college graduation, Natalie (Lili Reinhart) discovers she might be pregnant. We follow Natalie’s story as she takes two different paths: she is pregnant and stays in Austin to have the baby, or she isn’t pregnant and moves to LA to pursue her dream job. The reason to watch this film is the performance of Lili Reinhart, who makes Natalie someone you like and can root for. Reinhart has an effortless grace to her, making her performance seem real and fun. This is a strange film that flows back and forth without any warning between the two stories of Natalie’s life. In both cases, it's her choices that keeps the film moving along, whether it’s pining for the man who got away or having to decide on what she wants in life with her job. Look Both Ways could have ground to a halt very easily, but Reinhart keeps us interested in what happens to Natalie, with or without the child.   My Rating: Bargain Matinee   Look Both Ways Website  Now playing on the Netflix platform.

My View: Orphan: First Kill (2022) R  Esther (Isabelle Fuhrman) has escaped from a psychiatric facility in Estonia. Esther finds her way to America and cons her way into impersonating the missing daughter of a wealthy family. We know what the family doesn’t; she isn’t their daughter and isn’t well. The original 2009 film, Orphan, was a darn good horror movie with a great cast, including Vera Farmiga and Peter Sarsgaard as the married couple who has suffered a tragedy and decided to fill the void by adopting. Isabelle Fuhrman made the film work, who scared the crap out of you with a performance so creepy it's downright horrific. But it’s hard to capture magic twice in this prequel to the first film. Not to give too much away, Fuhrman plays Esther again, and despite a plot that tries to tie up a few loose ends from the first film, the film doesn’t deliver. The film isn’t scary, with Esther more of a sadistic killer than a disturbed young girl. The film, after the setup, goes off the rails about halfway through the film and never gets back on track. A disappointing revisit with one of the great horror characters in the history of scary movies. My Rating: Cable  Orphan: First Kill Website  Now playing in select theatres and on the Paramount+ platform.

Indiefest: Spin Me Round (2022)   Amber (Alison Brie) is a manager of a chain Italian restaurant who dreams of a better life. When Amber is selected to travel to Italia and take an immersive cooking course, she thinks her life has turned a corner. Boy, was she wrong. I was disappointed in this film, as it never quite got going, leaving a lot to be desired. The film starts out well with Amber in a dead-end job and no life to speak of; she is given the chance of a lifetime to go to Italy and spend a week learning about the craft of cooking, Italian style. Right off the bat, it's one disappointment after another until she meets the CEO and founder of the company, who begins to whisk Amber off her feet. Soon Amber feels that she is living a dream, but that dream turns into a nightmare. This should have been a better film, with all the heavy hitters in the cast, including Aubrey Plaza, Molly Shannon, and Fred Armisen, to name a few. Instead, we get a plot that tries too hard to make points right and left and a mystery that comes out of left field. I did enjoy the interplay between Brie and Plaza, but even that became a bit tired by the end of the film. I wanted Spin Me Round to be funnier, but instead, the comedy came out a little too al dente.   My Rating: Bargain Matinee   Spin Me Round Website  Now playing in select theatres.

Forgotten Film: Central Station (1998)  R  Dora (Fernanda Montenegro) is a former school teacher with a small stand in the rail station where she makes her living writing letters for illiterate people. One day she is asked to write a letter for a mother of a young boy. When the boy’s mother is killed in an accident, the young boy, Josue (Vinicius de Oliveira), finds the only adult that he knows, Dora. This starts a journey that will change Dora's and Josue's lives. Central Station isn’t a feel-good, happy movie, but at its core, it's a film about people finding out that they need each other to survive in this hard, harsh world. To tell you how good this film is, the movie garnered two Academy Award nominations, including one, Best Actress in a Leading Role for Montenegro, a rare thing for a foreign film actor in the 90s. I don't know if you will even like Dora, but I guarantee that you will fall in love with the relationship between a hardened woman and the boy who she decided to help.   My Rating: I Would Pay to See it Again   Central Station Info

Weird Credits: From the credits of Spin Me Round: Ballon Tech

Coming Soon to a Screen Near You: See How They Run (2022)  R A Hollywood film producer sets out to turn a popular play into a film, but one problem, members of the production are being murdered, one by one. In to solve the mystery and catch the killer are the world-weary Inspector Stoppard (Sam Rockwell) and his over-enthusiastic rookie Constable Stalker (Saoirse Ronan). This looks like so much fun, with Ronan possibly stealing the film from a great cast.   See How They Run Info