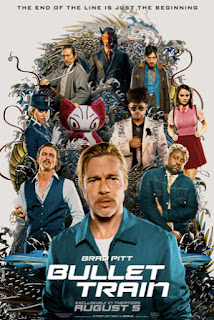 My View: Bullet Train (2022) R   Brad Pitt plays an assassin, code name Lady Bug, who has been given an easy task by his handler (Sandra Bullock), steal a briefcase and get off the train at the next stop. The only problem, Lady Bug has the worst luck of any person on the planet. Add to that burden is that the train is full of assassins, some of who are out to kill him, and others just want what he wants. I was worried about this film as I read the book by Japanese writer Kôtarô Isaka. The book was a funny thrill ride to read, and I am happy to say that David Leitch (Deadpool 2, Atomic Blonde) has done a masterful job of adapting the book into a fast and hilarious film which continues to surprise you until the end. Pitt looks to be having so much fun in the role of the bad luck assassin who just wants to complete his mission while maintaining his zen. The film is full of characters that will delight you with their quirkiness, including the twin assassins Tangerine (Aaron Taylor-Johnson) and Lemon (Brian Tyree Henry), who have a bit of bad luck on their own. Tangerine is a no-nonsense killer who takes pride in his work but is somewhat hampered by his cohort in crime, Lemon, who finds solace in relating everything they do to the children's show Thomas the Tank Engine. It seems that everywhere Lady Bug goes on the train, he encounters another assassin, some he has met before, and others are new, but all are out for blood or revenge. The film is full of action, great fight sequences, humor, and a ton of surprises (even for someone like me who knew the storyline). I had so much fun watching this film and seeing what next problem Lady Bug would have to get out of. Be sure to get your ticket and find your seat on a train that will make a few stops, but know that not everyone will be able to get off this fast-moving and deadly ride. By the way, there is a short but very funny bonus scene after the first round of end credits.  My Rating: Full Price   Bullet Train Website  Now playing in theaters nationwide.

My View: Easter Sunday (2022) PG-13  Joe (Jo Koy) is returning to his crazy mess of a family for the Easter weekend, coming off the road as a standup comedian. What could go wrong? Well, with Joe’s family, just about everything. Joe is on the cusp of getting a supporting role in a sitcom, but before he can get the job, he has to clean up a few things; his cousin is in trouble again. His mother and her sister are fighting again, and his son is disappointed in Joe, again. You know you have a problem with a paper-thin plot when a movie about a standup comedian playing a standup comedian does three standup routines during the film, including a very unfunny and uncomfortable set during an Easter Sunday church service. This film reminded me of those bad TBS comedies that the cable network ran when they tried to get away from all those Braves baseball games. The storyline is weak, and the comedy is even weaker, with an ending that tries too quickly to tie up everything in one happy bow. We have all been there for those times when you are at a comedy club, and the comedian’s material isn’t working. You get up and go to the back bar to get away and give yourself a break. If only we could do that for most of this film.   My Rating: Cable  Easter Sunday Website  Now playing in theatres nationwide.

Familyfaire: Luck (2022) G  Sam (voiced by Eva Noblezada) is the unluckiest person in the world. Despite Sam’s continual bad luck, she, along with a Scottish black cat named Bob (voiced by Simon Pegg), must join with some magical creatures to battle the forces of bad luck to save the world. Luck is an overlong, bland animated film that starts promising but, in the end, becomes predictable and, at times, boring. The idea that there are creatures responsible for both good and bad luck is amusing in concept, but this film spends too much time giving us a tour of the Good and Bad Luck worlds and not enough movement in the plot to keep us interested. I think kids will enjoy the relationship between Sam, the 'bad luck' human, and the cat named Bob, but they will become, like me, bored as the story keeps going, stopping and starting too many times for us to care what happens. It’s too bad, as the idea of luck being put out into the world is a funny idea, just not told for this long.   My Rating: Bargain Matinee   Luck Info  Now playing on the Apple TV+ platform. 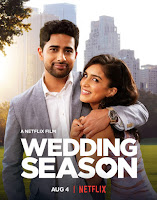 My Take: Wedding Season (2022)  Asha (Pallavi Sharda) and Ravi (Suraj Sharma) are both being pressured to find spouses, so they decide to pretend to date each other to survive a summer of weddings. However, Asha and Ravi just might be hearing wedding bells, for real, with each other. Wedding Season is a fun, enjoyable rom-com that doesn't disappoint. Sure it’s predictable, with the two falling in love (sorry for the spoiler, but it’s a rom-com), and of course, a problem develops, but that’s why we watch this type of film. The two leads, Pallavi Sharda and Suraj Sharma, are adorable together and make a great couple, and yes, they dance…a lot. The film has plenty of ‘feel good’ moments and, of course, plenty of falling love montages to go around. So fill out that wedding invitation and join in the fun.   My Rating: Bargain Matinee Wedding Season Website  Now playing on the Netflix platform.

Indiefest: I Love My Dad (2022) R  After his son, Franklin (James Morosini), blocks him online, Chuck (Patton Oswalt) creates a fake account. Consequently, Chuck has just catfished his own son. So the plot will make you wince, a lot, as Chuck decides to create someone online that Franklin is sure to interact with, a young, attractive woman. Stealing the pics and profile of a friendly waitress Chuck meets at a diner, he starts interacting with his son as ‘Becca,’ and very quickly, Chuck has gone down a rabbit hole that gets weird and icky almost from the start. Patton Oswalt makes this film work, taking some risks that work only because he is such a comedic talent. The film is funny and uncomfortable simultaneously, and yes, this is based on a true story. The film does paint itself into a corner that it quite doesn't come out of, but it’s fun to see Oswalt squirm as he keeps applying those coats of paint.   My Rating: Bargain Matinee  I Love My Dad Website   Now playing in select theatres.

My Take: Prey (2022)  R  Naru (Amber Midthunder) dreams of being recognized by her tribe as a fierce warrior. Naru dreams of proving herself worthy, and when a mountain lion threatens her people, she sets out with her trusty dog to hunt it down. The hunter becomes the prey when she encounters a fierce alien Predator, a warrior that has an arsenal at his side that Naru has never seen before. Set in the early 1700s, this is a story of someone who, because they are fighting not only for their survival but also for their people, must overcome the odds and defeat what seems like an undefeatable monster. Prey is a thrilling and exciting tale of battles and bravery, and both the camera work and the cinematography make the film come alive. Amber Midthunder is magical as Naru, making one fierce warrior we can root for from the start. I love how the film lets us know that evil exists in many forms. Prey is a story of one woman’s journey to prove to herself and her tribe that she is up to the task. Proving that evil can be defeated through cunning and perseverance. And lots of blood. Lots and lots of blood.   My Rating: Full Price   Prey Website  Now playing on the Hulu platform.

Indiefest:  Sharp Stick (2022) R Sarah Jo (Kristine Froseth) is a 26-year-old living with her mother, and all she wants in life is to be seen. Consequently, Sarah Jo starts an affair with a married man (Jon Bernthal), who happens to be her boss, and her world will never be the same. Sharp Stick is a film where writer/director Lena Dunham (Girls, Tiny Furniture) has created a character just for the shock value. I am unsure if Sarah Jo is on the spectrum or if Dunham has made her a 26-year-old virgin who doesn’t know about internet porn, sex, or relationships. Sarah Jo is a likable person with a talent for dealing with a special-needs boy named Zack. Zack’s father is a stay-at-home guy named Josh (Joe Bernthal), whom Sarah Jo targets to take her virginity (the first of many things Sarah Jo does without rhyme or reason). It’s a very icky and uncomfortable scene where he seems to be doing the right thing for about 2 minutes, then succumbs to her charms (I guess). While Sarah Jo is 26 and, therefore, is of age, she seems mentally about ten making the act seem wrong. After the affair is broken off, Sarah Jo is convinced she is bad at sex and goes on a weird goal-setting challenge to do every sex act she has seen in porn with random guys she meets on the internet. Combine this with an older sister (Taylour Paige) and mother (Jennifer Jason Leigh) who have no clue or interest in what Sarah Jo is doing in her life. It’s a lazy and uncreative world that Dunham has given us, full of stick figure characters that are there to shock you without substance or thought. Sharp Stick then tries to end on a happy note, but even that is ruined by a final scene that I have no idea what the film was trying to say. My Rating: You Would Have to Pay Me to See it Again Sharp Stick Website  Now playing in select theatres.

Forgotten Film: Second Best (1994) PG-13  Graham (William Hurt) is a man who has always been alone. Even living with his father, he is alone, a man who has never gotten close to anyone. Now in his forties and with his father dying, Graham decides he needs someone in his life, and he adopts James (Chris Cleary), a troubled young man with a past that haunts him. Together they will figure it out. William Hurt has always been a favorite actor of mine, and he is brilliant in the role of the slightly awkward and off-kilter Graham, a man who decides to make room in his life for another lost soul, someone who is just as damaged as he is. Second Best is a lovely film about people who have difficulty accepting love and reap the rewards when they finally do.   My Rating: Full Price   Second Best Info

Coming Soon to a Screen Near You: The Woman King (2022) The story of Nanisca (Viola Davis), a general of the Agojie, the all-female unit of warriors trained to take on an enemy determined to steal their people and destroy their way of life. All you need to know is that Viola Davis has a sword in this film and is kicking some serious butt in the trailer.   The Woman King Info 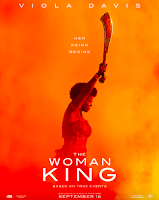