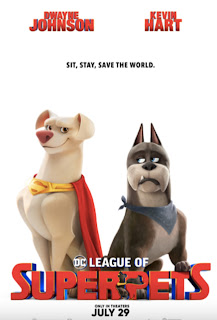 FamilyFaire: DC League of Super-Pets (2022) PG  Krypto has always been by Superman’s side, in thick and thin, even when he started dating Lois Lane because that’s what a dog does. When Lex Luthor captures the Justice League, it’s up to Krypto and a few of his shelter-pets friends to defeat the evil Lex and save Superman. Because that’s what’s Superman’s ‘best friend’ does. This is a fun and enjoyable film for the whole family. Kids will enjoy Krypto and his ‘super friends,’ and adults will enjoy the fast and funny jokes. Dwayne Johnson is a blast as the voice of Krypto, a dog convinced that Superman is about to dump him for Lois Lane. Krypto meets a motley group of shelter animals, including their leader Ace, voiced by Kevin Hart. Besides Lex (voiced by Marc Maron), there is another evil mastermind, but I won’t ruin the surprise on that one. The storyline is a blast, the action will keep the kids interested, and the interplay between Krypto and his shelter friends is full of laughs and a few surprises. Be sure to stay through the first end credits, as with many super-hero films, there is a surprise scene setting up the next film.  My Rating: Full Price   DC League of Super-Pets Website  Now playing in theatres nationwide.

My View: Vengeance (2022) R  A podcaster (B.J. Novak) travels from New York City to Texas to attend a funeral of a woman he casually dated. While there, he discovers that she was murdered and decides to make a podcast out of the experience. Texas may never be the same. I loved this fish-out-of-water mystery with a twist. Like The Office (Novak was one of the main writers of the show, as well as one of the cast members), this is a dark comedy with a lot of pokes at conservatives and liberals, gun control, and the culture/myths of Texas. I loved the exploring of the cult of Whataburger (I’m a member) and the correct use of the Southern phrase “Bless Your Heart’. Novak plays a character that you will both love and hate (he can be a selfish jerk and condescending as heck), but you are willing to go on this journey with him to solve a murder while learning a bit about himself and the importance of family in your life. Vengeance is a fun film that gets very dark by the end, but I think you will enjoy it as much as I did.   My Rating: Full Price  Vengeance Website  Now playing in select theatres.

My View: Thirteen Lives (2022) PG-13  Thirteen boys, and their soccer coach become trapped in a cave in Thailand. Now it’s up to a group of rag-tag cave divers to rescue them while the world is watching. I had a funny experience at the screening of this film. I knew the story, having seen the excellent documentary The Rescue last year, and about 45 minutes into this film, a woman behind me remarked, ‘they just found the boys. What’s the rest of this film about then?’. This remarkable story, told skillfully by Ron Howard, is more about the incredible rescue in the 2nd half of this film than the first half set up. It’s a fantastic tale of a seemingly impossible rescue by a group of cave divers who, on the surface (no pun intended), don’t look like they could dive in a pool, much less in a cave of every expanding, rushing water. The film is led by the two divers brought in due to their expertise in cave diving, played by Colin Farrell and Viggo Mortensen. Farrell is the heart and soul of the expedition, but it’s Mortensen, playing the cynic old pro driver, who steals the movie, as he is convinced that what they are doing is doomed but is willing to follow Farrell’s character and his ideas on how to rescue the boys from an impossible situation. Even knowing the story, I was glued to my seat during the rescue attempts (yes, that is plural), and you will be too. Thirteen Lives is an inspiring film about a group of courageous men who risked their reputation and their lives to rescue a group of boys who got stuck in a cave across the world.   My Rating: Full Price  Thirteen Lives Website  Now playing in theatres nationwide and on Amazon Prime on Friday, Aug. 5th.

Indiefest: Hallelujah: Leonard Cohen, A Journey, A Song (2021) PG-13  Documentary about the life of singer-songwriter extraordinaire Leonard Cohen, centering around his powerful, mesmerizing song Hallelujah. Fascinating documentary about a man and his relationship with a song that became a staple of all the TV music competition shows. Cohen was a master of telling a story through song. I always felt that when I listened to his songs, I was experiencing a short movie told through music. The film makes his inspirational and powerful song Hallelujah the center of the story. It’s a tale of a song that took him seven years to write, going through over 150 versions of the lyrics, and then there are different versions of the song. The most interesting bit of the film is how the song became such a hit and how so many people think it’s another artist’s song (both John Cale and Jeff Buckley recorded the song that became bigger hits than Cohen’s version). Fans of Cohen are going to go nuts over the number of interviews with Cohen and his numerous performances in concert, including his groundbreaking five-year tour in his seventies. If you don’t know much about the man or his songs, this is a great way to be introduced to a man who could tell a whole story in just 4 minutes of a song.   My Rating: Full Price  Hallelujah Website  Now playing in select theatres.

Indiefest: Resurrection (2022) Margaret's (Rebecca Hall) orderly life is about to unravel as a man from her past (Tim Roth) comes back into her life and brings the horrors of her past with him. First, the good: both Rebecca Hall's and Tim Roth's performances are brilliant. Hall is both steely in one moment ready to kick ass, and in another moment, a quivering mess, and only someone as talented as Hall could pull this off. Roth is perfect as the creepy guy that comes back into Margaret’s life after 22 years. This film is part horror, part suspense, as we go into a dark past that includes abuse and mind control. I will warn you that some parts of the film are disturbing, and I think the film went a little too far into the extreme for me. But still, Resurection is worth seeing for the performances as we go down a bumpy road that just could lead to madness  My Rating: Bargain Matinee   Resurrection Website  Now playing in select theatres.

Indiefest: My Donkey, My Lover, and I (2020)   When Antoinette’s (Laure Calamy) trip is canceled due to her married lover going on a vacation with his wife, she decides to follow them on a hiking trip with the help of an overprotective donkey named Patrick. This is a fun film to watch, and you will fall in love with Patrick, the donkey that goes on this journey of self-discovery with Antoinette. The film is a light comedy that is a breeze to watch, helped along by the winning performance of Laure Calmay, who gives life to a self-centered, over-the-top woman who is head over heels in love with a married man. Calmay is delightful, but she is upstaged by Patrick, a donkey who lets Antoinette know when she is doing something bad, whether it's taking the wrong trail or picking the wrong man. My Donkey, My Lover and I isn’t a groundbreaking film of self-discovery like Wild, it's just a fun romp with a headstrong donkey that has more sense than his traveling companion.   My Rating: Bargain Matinee   My Donkey, My Lover, and I Website  Now playing in select theatres.

Indiefest:  Not Okay  (2022) R  Danni (Zoey Deutch) wants to be a writer, but no one will take her seriously. She decides to make everyone jealous and fakes a trip to Paris, claiming she won a writers’ retreat. However, after posting fake pictures, Paris is attacked by terrorists, and Dani is caught up in a lie about to go viral. It’s hard to make a comedy where the main character is unlikable from start to finish but Not Okay does that. Danni gets caught up in a lie that goes viral, and she enjoys the result. This is a character that doesn’t think; Danni just goes with the lie because telling the truth would cost her the fame she has suddenly taken. I like Zoey Deutch, and she has a flare for comedy, but this film never lets Deutch show that talent. Instead, the film is too busy making fun of and saying how bad the Internet fame game is. Deutch is overshadowed by an outstanding performance from Mia Isaac, a young woman Danni meets who has suffered a real tragedy and befriends Danni, thinking she is a kindred spirit. Isaac has a speech near the end of the film that is the only redeeming factor in this film that uses a terrorist attack as fodder to make fun of how bad the Internet and influencers are. My Rating: Cable  Not Okay Website  Now playing on the Hulu platform.

Forgotten Film:  Smashed (2012)  R   Married couple Kate (Mary Elizabeth Winstead) and Charlie (Aaron Paul), whose love is built on their drinking habits, are tested when Kate decides to get sober. This is a tough film to watch, just because the characters go through so much pain. Mary Elizabeth Winstead is outstanding as Kate, who lies at the drop of a hat to cover up her drinking but realizes, after waking up too many times in strange places, that she must change her life. Aaron Paul doesn’t do a bad performance as her husband, but this is Winstead’s movie, and she runs with it. You genuinely hope that she can get her life together, but you also know that it’s going to take some major changes and sacrifices, including, probably, the sacrifice of her marriage. Smashed was the 2nd featured film that one of my favorite filmmakers, James Ponsoldt (The Spectacular Now, The End of the Tour), made, and it was such a great film with an outstanding cast. My Rating: Full Price   Smashed Info

Weird Credits: From the credits of Thirteen Lives: Thai Looping

Coming Soon to a Screen Near You: Blonde (2022) NC-17   The story of the inner life of Marilyn Monroe (Ana de Armas). The film is based on the fiction novel by Joyce Carol Oates and directed/written by Andrew Dominik (The Assassination of Jesse James by the Coward Robert Ford, Killing Them Softly). Dominik has stated that fans of Marilyn may be upset by this film’s content. Also, note that the film contains very little dialogue, and the director has said that the film is an ‘avalanche of images and events.’ I am excited to see this film because of Ana de Armas, who, in the last few years, has become a big star with outstanding performances in Knives Out (2019), No Time to Die (2021), and The Gray Man (2022).   Blonde Website