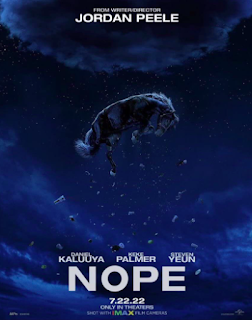 My View: NOPE (2022) R   A brother and sister (Daniel Kalyuua and Keke Palmer) are working on their family ranch that supplies horses to Hollywood films. Things start getting strange on the ranch as it looks like aliens are flying around, and the duo decides to document these occurrences. Consequently, their actions are to the dismay of the forces behind the flying saucers. See this on the big screen. I mean, see it in a theatre on a screen as big as you can with a sound system to match. A UFO lover’s dream come true, NOPE is a fun, well-done thriller with a few scares along the way that will fulfill your wish for a big blockbuster ride. And I will tell you, this film will also shock you, almost from the start. With a great cast, incredible sound effects, and cinematography that fully utilizes the IMAX camera to its glorious beauty and NOPE is a film that will thrill and amaze you. Like any Jordan Peele film, it is filled with humor, some of which is pretty dark but allows you to release a bit of the tension that builds throughout the film. The film has a lot to say, touching on the entertainment industry, our reliance on electronics, our attempt to train animals against their will, and how hard it is to follow our dreams, especially if it's not your own. So please sit down and get ready to be amazed, and I warned you, shocked.   My Rating: I Would Pay to See it Again   NOPE website  Now playing in theatres nationwide.

My View: The Gray Man (2022) PG-13  Court Gentry (Ryan Gosling), whose true identity is known to none, is the CIA’s man when someone needs to die, the Agency-sanctioned merchant of death. After accidentally uncovering dark Agency secrets, Court is being hunted by Lloyd Hasen (Chris Evans), a former fellow assassin, who has been given the task to hunt Court down and take him out. Now the only person he can count on is Agent Dani Miranda (Ana de Armas), but the odds are against him…just the way that Court likes it. I enjoyed this film, but I am a big fan of action films, especially ones that feature a lot of hand-to-hand combat, and this has a lot. Ryan Gosling plays an assassin with a soul who won’t cross a line, even if it means it will piss some people off. Gosling’s agent six is a superhero, someone who can take on an army single handily, fall off a roof with only a few scratches and take a pounding but keep on fighting. He is up against Chris Evans's antihero, a man who doesn’t mind collateral damage as long as he gets what he wants, and in this case, he wants Agent Six dead. Evans is the surprise of the film, playing a creepy bad guy with a fun flair for the dramatic. Ana de Armas holds her own in the action sequences and makes a good companion for Gosling’s deadpanned Agent Six. The film goes on a little too long, but it's a good time with a ton of action sequences, including a thrilling fight inside a giant transport plane as it slowly falls apart. So join in on the action and enjoy the duel between Evans and Gosling.   My Rating: Bargain Matinee   The Gray Man Website  Now playing on the Netflix platform and in select theatres.

My View: Anything’s Possible (2022) PG-13  Kelsa (Eva Reign), a confident young woman who is trans, is just trying to survive her senior year of high school. All she wants to do is blend in and get this year over with, but love has another idea. However, when a classmate, Khal (Abubakr Ali), gets a crush on Kelsa, he decides to go for it and ask her out, even though he knows they will be the center of attention. I really like this film, with its take on a teen romance, where instead of the hot guy dating the nerdy girl (or visa-versa) causing trouble within their friends, we get the hot guy dating someone that no one see’s coming, Kelsa. The film does a great job of giving us a young woman who doesn’t want to be a trailblazer; she wants to live her life like anyone else. I loved the relationship between Kelsa and her mother, who have a rule that Kelsa and her mother can only discuss things the average mother would ask her average daughter. The two leads are just what you want in a teen romance; adorable, slightly klutzy and have great on-screen chemistry that makes you want their characters to be together. And yes, Kelsa being trans is a big deal in the film, but it’s handled with compassion and with a character that just wants to be seen as Kelsa, nothing else. As it should be.   My Rating: Bargain Matinee  Anything's Possible Website  Now playing on the Amazon Prime platform.

Indiefest: Fire of Love (2022) PG  Documentary about scientists Katia and Maurice Krafft, who fell in love over their research on volcanoes. They were known worldwide as daredevils who brought us some of the most explosive imagery ever recorded. Significantly, they died doing the thing that they loved. Right off the bat, I’m going to tell you that this film is sure to be in my top ten films of 2022, and I predict it will be nominated for the Documentary Academy Award next year. Yep, this film is that good. The film tells the story of two of the world’s greatest volcanologists, Katia and Maurice Krafft, who just happened to be married. This is not only a story about Volcanos but also a love story between two brilliant and interesting people who bonded instantly over their love of volcanoes. Ninety percent of the footage in the film is from the personal archives of the Krafft’s. To say that there are shots of volcanos that are simply breathtaking is an understatement. The film is summed up by an amazing shot of an erupting volcano, with hot, red lava spewing up into the air, as the two scientists, in silver protective suits, almost dance in front of the awesome display of earth’s mighty power. You can see just from that one shot why they both knew that it wasn’t how they would die but when. However, yes, they did die, but it is very evident from this beautiful and moving film that they died doing what they loved, and they died as they wished, together.   My Rating: I Would Pay to See it Again   Fire of Love Website  Now playing in select theatres.

Indiefest: Alone Together (2022) R  What happens when two strangers (Katie Holmes, Jim Sturgess) book the same Airbnb during the start of the lockdown of the pandemic. Katie Holmes wrote, starred, and directed this film about two people who are in bad relationships, who then find out that maybe, just maybe, their failed relationships aren’t their fault. This is one of many films I’ve seen in the past year where people are stuck together at the start of the pandemic when everything was shut down, and everyone was told to stay home and not go out. This is a very predictable romance between two likable characters, who we know are meant for each other, and it’s only a matter of time before they both realize it. There isn’t anything new in this film, and both actors are fine in their roles. Holmes does let her character express a few feelings and opinions about being allowed when you are in a relationship, to being yourself and following your dream. The film delivers what you think it will, a romance that finds two people in the middle of a worldwide crisis; I just wish that the plot had a few more surprises in it.   My Rating: Bargain Matinee   Alone Together website  Now playing in select theatres.

Indiefest: Murina (2021)  Julija (Gracija Filipović) lives with her parents on a Croatian island, who she increasingly doesn’t get along with. When a handsome older man, Javier (Cliff Curtis), comes to the island, Julija sees it as an opportunity to escape the boredom of her life and her parents. This is a film about a power of wills between a father, Ante (Leon Lucev), and Julija, a headstrong young woman who wants to get as far away from her father as possible, whether it be overseas or in the ocean. Ante is a man who is controlling and has an overpowering ego that won’t take anyway but his. Julija is happiest when she is in the water, it’s her escape from reality. Ante is driven by a visit from an old friend, Javier, who he hopes will buy his land and he and his family can move to the mainland. Julija sees Javier as her savior, someone who can rescue her from her father and his oppressive rule. Julija’s mother, Nela (Danica Curcic), is caught between her husband, whom she has stood by all these years, and her daughter, whom she is proud of. This is a movie that constantly builds the tension between father and daughter, and we know that the hopes and dreams of both are doomed almost from the start. I loved Gracija Filipovic’s performance of Julija, as she continually pushes the boundaries that her father has set for her, whether it’s wearing an old dress of her mother’s against his wishes or leaving out a line about her father in a poem that he forces her to recite in front of a crowd. Murina is a film where everyone’s dreams are seemingly just out of reach, even when those dreams were in the past.   My Rating: Full Price    Murina Website  Now playing in select theatres.

Forgotten Film: Murder by Numbers (2002) R A 'by the book' police detective (Ben Chaplin) and his loose-cannon partner (Sandra Bullock) are investigating a murder. Little does the detective know that the murder has been committed by two high school kids (Ryan Gosling, Michael Pitt) who only did the killing to see if they could commit the perfect crime. This is a forgotten Sandra Bullock film that is quite good. Bullock plays a character a little different from what our Sandy plays typically, a character that you might not like. In fact, I think you will like Ben Chaplin’s character much more than Bullock’s, but that’s why I like this film. Plus, Gosling and Pitt are creepy as heck, making two terrifying and clever criminals who will not be easy to catch. The film also has one of my favorite unappreciated actors, Chris Penn in it.  My Rating: Full Price   Murder by Numbers Info

Weird Credits: From the credits of NOPE: Mask Maker

Coming Soon to a Screen Near You: Smile (2022) R   After a patient, who claimed she was seeing something that no one else could see, killed herself in front of Dr. Rose Cotter (Sosie Bacon), Rose begins to experience frightening occurrences that she can’t explain. Rose must confront her troubled past in order to survive this new horrifying reality. The trailer looks like it could be terrifying.    Smile Info