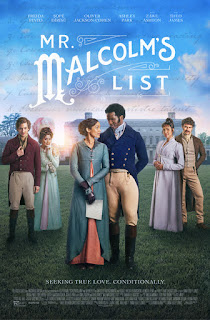 My View: Mr. Malcolm’s List (2022) PG   Mr. Malcolm’s List takes place in 1800s England when a young woman helps her friend to get revenge on a man who has rejected her because she didn’t meet the requirements on his list for a bride. Fans of Jane Austin and Bridgerton will be happy with this romantic comedy, though the film is not quite as witty as Austin’s work or as steamy as the Netflix hit. This is an enjoyable tale of trickery and finding love in the most unexpected places (though you can see what will happen from almost the first frame). The film is helped by a winning cast led by Freida Pinto as Selina, the friend who reluctantly helps her best friend, Miss Thistlewaite (Zawe Ashton), get revenge when Miss Thistlewaite is quickly rejected by England’s most eligible bachelor, Mr. Malcolm (Sope Dirisu). Of course, plans turn into romance and betrayal, as with any period romance of this time. It’s up to fate and maybe a little meddling to help everyone figure out who loves who and achieve that happy ending we all want. While it might not meet all your ‘Bridgerton’ needs, Mr. Malcolm’s List is a fun romp that just might tide you over until the next season appears.    My Rating: Bargain Matinee   Mr. Malcolm's List Website  Now playing in theatres nationwide

My View: The Forgiven (2021) R  A wealthy London couple (Ralph Fiennes, Jessica Chastain) are on their way in the Moroccan desert to a lavish weekend party when their car strikes and kills a local teenage boy. Consequently, the couple, with the help of their friends, cover up the incident. However, trouble arrives when the boy’s father arrives seeking justice. This is a dark tale about the rich, where they are proud of their lack of morals if only to give them something to do because they are so bored with life. Fiennes and Chastain are a couple that can barely stand each other. She is a failed children’s book writer who hasn’t written a thing in eight years, and he is a doctor whose practice is falling apart due to his alcoholism. They are on their way to a party in a remote location in the desert hosted by a gay couple, Richard (Matt Smith) and Dally (Caleb Landry Jones). Along the way, the doctor and his wife hit and kill a young man with their car. Once the couple finally arrive at the party, with the dead body in their backseat, the story branches off into two stories; the seduction of the doctor’s wife by a wealthy American playboy (Christopher Abbott) and the doctor’s journey to go with the dead boy’s father back to their home to bury his son. This is a story full of people you don’t like, making shallow and self-serving choices, with the only question being, will the father of the dead young man get his revenge, or will somehow the doctor talk/will his way out. I enjoyed the dance of seduction that Chastain and Abbott have, but I got tired of the bashing over the head that the rich are horrible, ugly, and shallow. The ending can be seen from a sand dune away, and the film gives one a bit of a feeling like the aftereffects of a party that didn’t quite meet your expectations.   My Rating; Bargain Matinee   The Forgiven Website  Now playing in theatres nationwide.

My View: The Princess (2022) R  A young princess (Joey King) refuses to marry a man she does not love and is locked away in her father’s castle. Now the man she spurned is hell-bent on taking her father’s throne, and the Princess must escape and fight back to save the kingdom. They have no idea who they are messing with because she is The Princess. Let me say that I was surprised, almost shocked at the start of this film, when little Joey King, star of The Kissing Booth series, killed 7 or 8 bad guys in very bloody ways in the first five minutes of the film. Kind of a ‘The Raid’ in reverse, The Princess must escape from the very top of the castle and fight her way down to the ground to rescue her family from the evil wanna-be King, played by Dominic Cooper. Little does this man, who is trying to steal a kingdom, know that our heroine has been training her whole life for this occasion. The Princess fights her way, killing and maiming numerous soldiers until she meets her match in the evil wanna-be King’s lead assassin, Moria (Olga Kurylenko), a woman who wields a deadly whip with the best of them. I love sword fights, and this film has plenty of them, with a bit of martial arts thrown in. The action is fast and heavy, and King makes a nimble and fun action hero kicking bad guy butts all over the place. Fans of King will have fun with The Princess as she fights through a gauntlet of bad guys on her way to a showdown that won’t disappoint.   My Rating: Full Price   The Princess Website  Now playing on the Hulu platform.

Indiefest: Doula (2022)   When a couple’s (Troian Bellisario, Arron Shiver) midwife suddenly dies, the couple decide to hire the late midwife’s son, Sascha (Will Greenberg), to replace her. It’s a decision that could change all of their lives. This is a film that explores relationships and how the trials and tribulations of pregnancy can affect them. Deb and Silvio are a couple who found out that Deb was pregnant three weeks into their relationship. Silvio is dealing with an ex-wife and son, while Deb is realizing that her world has quickly changed from being the center of her life to one that will be responsible for another life. Add in that Silvio is pretty spineless when dealing with his ex-wife and tends to forge ahead with plans without consulting Deb. Adding to the tension is Sascha, who seems to just go with the flow, willing to allow Deb to do just about anything she wants, including smoking weed and drinking. Deb is a woman who doesn’t want to give up her very active life, including playing basketball with her friends so close to her delivery date. The film doesn’t always hit the right notes ( there is a bizarre set of scenes where Silvio goes to a party and gets high on mushrooms), but it does a great job of giving us a look at all the emotions and stresses that pregnancy can provide us with, making a mess of things until a certain someone makes an appearance and changes their outlooks forever.   My Rating: Bargain Matinee   Doula Info Now available on most digital platforms.

Indiefest: Accepted (2021)   Accepted is a documentary about the students of the TM Landry Prep School, a learning institution where a remarkable 100% percent of its students go on to college, most to some of the elite and prominent colleges in the nation. However, an explosive NY Times article exposes the controversial teaching methods of the school and the possible cheating that the school fosters. This is three documentaries in one. The film starts as a documentary about an unlikely success story of how a small school, using unconventional methods, is getting students into college at an astounding success rate. Then the documentary turns when a NY Times report (along with some other red flags) tells a different story of not only the possible fabrication of records but also abuse. When the documentary crew is no longer given access to the school, the filmmakers then turn to the students who were left behind to deal with the mess of a school that begins to fall apart at the seams. This is an exploration of the college admissions scandal from not the rich and privileged side of the story but from those who don’t have the resources or the money to make it into the top schools. This is a film that gives us a look at just how hard it is to get into ‘the best schools’ and how the early success of a small school may have bred a culture of immense pressure to live up to an almost impossible standard to keep. The film is full of heroes and villains, but sometimes it's hard to tell which is which. All we learn from this emotional and powerful film is that the children are the victims.   My Rating: Full Price  Accepted Website   Now playing in select theatres and On-Demand.

Forgotten Film: 28 Weeks Later (2007) R  Six months after a virus that made people into zombies moved across England, the US Army has secured a small area of London to allow people to start living their lives again. Unfortunately, the best-laid plans can’t anticipate the ruthless march of the zombies. Rare is it that a sequel matches the original, but in this case, 28 Weeks Later matches the glory of 28 Days Later (2002). The two films do feel different (Danny Boyle directed the first film with built suspense slowly), as this film, directed by Juan Carlos Frenadillo) right from the start hits you hard with zombies attacking a farmhouse and then doesn’t let up. The film is aided by a great cast, including Jeremy Renner, Imogen Poots, Rose Byrne, and Idris Elba. You can see this film without seeing the first one (though it does help a bit), and the action is both scary and thrilling as the zombies seem to be multiplying in both their population and their determination. However, a warning; this film may create a few nightmares for you.   My Rating: Full Price    28 Weeks Later Info

Weird Credits:  From the credits of The Princess:  Phantom Camera Operator

Coming Soon to a Screen Near You: Beast  (2022)  R  A father, Dr. Nate Samuels (Idris Elba), and his two daughters (Leah Jeffries, Iyana Halley) are on vacation in Africa. They soon find themselves hunted by a massive lion that has gone rogue and is on a killing spree. Nate and his daughters encounter a lion that is hell-bent on proving that the Savanna has but one apex predator. I think all I need to know is in the trailer. I’m in!  Beast Website 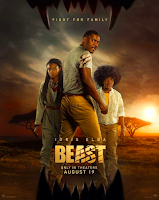