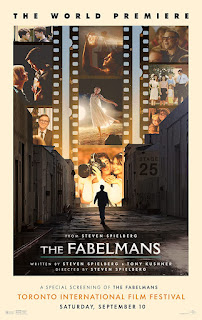 My View: The Fabelmans    (2022) PG-13   Growing up in post-World War II Arizona, Sammy Fabelman (Gabriel LaBelle) begins making home movies and learns how the power of film can help us see the truth about each other and ourselves. Steven Spielberg brings us his most personal film that he has ever made. A movie that is a love story of both film/filmmaking and his family, especially his mother. We get to witness how it all started, a trip to the movies with his parents to see a spectacle of Cecil B. DeMille’s The Greatest Show on Earth. Having trouble dealing with a traumatic car crash detected in the film, Sammy’s mother suggests that he film with his father’s home movie camera, a recreation of the scene using his toy train. This sparks the filmmaker in Sammy, and we see through his childhood and into his teenage years just how making movies became a passion for Sammy. This passion is beautifully expressed when Sammy’s Uncle Boris, played by the fabulous Judd Hirsch, tells Sammy how he is different from most people. That Sammy loves his family, but his love and passion for art supersedes everything else. It’s a small but moving scene that lets us know making movies is the thing that drives Sammy. The film is filled with brilliant performances, but it’s the role of Michelle Williams as Sammy’s fiery, funny, and sometimes slightly insane mother that drives this film and creates all the drama in the movie. Williams, channeling a bit of Judy Garland, is absolutely breathtaking as Mitzi, a woman who, like Sammy, has a fire for art. In her case, it’s music, but she sees that same love of creating in Sammy, encourages him to explore it, and becomes his biggest fan. It’s a role that dominates the scenes Williams is in and is sure to bring her another Oscar nomination (her 5th) for her role as this madcap, emotional woman who thinks nothing of taking her children in the car to follow a tornado that has suddenly appeared in their town. This film is filled with incredible performances throughout the film, including Gabriel LaBelle, who portrays Sammy in his teen years, giving us a moving and funny look at a boy turning into a man who loves his mother but is torn by a secret he discovers about her. Paul Dano gives us a father in Burt who loves science and loves his wife but can’t quite connect and understand both his wife’s and his son’s obsession with something that isn’t practical or, in his eyes, useful. I think by reading my reviews over the years, you know I share this same passion for film, and I love that Steven Spielberg has given us a film that so wonderfully and beautifully expresses that love. Please go see The Fabelmans in a movie theatre where it deserves to be seen so you can immerse yourself into the magical world of Sammy and his madcap, funny and loving family. And maybe, discover that you also share that love of movies.   My Rating: I Would Pay to See it Again  The Fabelman's Website  Now playing in theatres nationwide.

Familyfaire: Strange World (2022) PG   Searcher (Jake Gyllenhaal) is the son of legendary explorer and all-around hero Jaeger Clade (Dennis Quaid). Ever since his dad died when he was young, Searcher has been trying to leave that life behind. However, the world needs saving, and now Searcher must lead his family of explorers on a mission to find the source of what threatens their way of life. I loved the animation full of wild colors and even wilder animals as the explorers encounter a strange new world full of magical creatures. I wish the story matched the magic of the animation, but I found the tale a bit boring and most of the characters dull. I found the story a bit hard to follow, and I was a bit bored. Kids may love all the beautiful creatures, especially a blue sort of talking blob named Splat that takes a liking to Searcher’s teenage son. I wish the writing had matched the brilliant animation, but alas, this is one story that the explorers couldn’t find.   My Rating: Bargain Matinee  Strange World Website  Now playing in theatres nationwide.

Indiefest: Bones and All (2022) R  Maren (Taylor Russell) is a young woman who has been abandoned by her father and is on the run. Maren meets Lee (Timothee Chalamet), and Maren finds out quickly that they share a deep, dark secret. A secret that Maren thought she was the only one to have. Okay, I’m going to give away a bit of the plot. Maren and Lee are both cannibals. They belong to a sort of secret society of people who like to eat people and will do about anything, including killing, to satisfy their desires. In the middle of this madness is the love story between the two odd souls that have, by chance, found each other and, no pun intended, can’t live without each other. The film is way too long and asks us to forgive the two’s killing spree because they are in love and in weighed down by the way too over-the-top performance by Mark Rylance, a fellow cannibal lover who takes Maren under his wing but gets too attached to her, and she tries to run from him. I will say that I did enjoy Taylor Russell's performance, as she lights up the screen in every scene. However, I think this is a film that will surely disappoint a lot of Chalamet fans who aren’t getting the sweet romance that they may want.   My Rating: Bargain Matinee   Bones and All Website  Now playing in theatres nationwide. 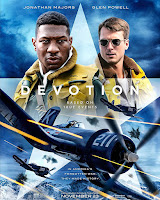 My View: Devotion  (2022) PG-13  Jesse Brown (Jonathan Majors) is doing something many people in the Navy thought impossible, becoming the first Black aviator to earn his wings through the Naval basic training program. Now he must team with his new wingman, Tom Hudner (Glen Powell), and fight a war in Korea, a war that will test their skill and friendship. I like this film about friendship and the experience of being the only Black aviator in the Navy, but I wanted it to be grittier and more down to earth. The film is bolstered by the outstanding performance of Jonathan Majors, playing a man who is determined to make it on his own without the help or pity from his fellow aviators. The film also has exciting flying sequences that are thrilling to watch before and during the Korean War. I guess I just wanted a tougher edge to this film, and it seems to set its sight on appealing to as broad an audience as possible, one that wants a good buddy picture about being in war. Devotion is a fine film, but I think it could have been more.  My Rating: Bargain Matinee  Devotion Website  Now playing in theatres nationwide.

Indiefest: Salvatore: Shoemaker of Dreams (2020) PG   Documentary that tells the extraordinary story of Salvatore Ferragamo, who came to America as a teen and became the shoemaker to the stars in Hollywood. He then left Hollywood, went back to Italy, and founded the namesake luxury brand the world adores. I never understood the fascination of how some people just go nuts over shoes until after seeing this film. The artistry and skill that Ferragamo put into his shoemaking is simply amazing. It’s a remarkable story about a man who, at a very young age, started his career and, through skill and determination, became one of the most in-demand shoemakers in the world. I will admit that the first half of the film is the part I enjoyed, showcasing Salvatore’s travels from Italy to America and then his work in Hollywood during the height of the silent film days. The film lags when Salvatore decides to move back to Italy and leans far too heavily on interviews with family members, who tell long-winded stories that rarely pay off. Still, there are the shoes that Ferragamo made shown throughout the film that anyone who loves the art of the shoes will love.   My Rating: Bargain Matinee   Salvatore: Shoemaker of Dreams website  Now playing in select theatres

Forgotten Film: Wilbur Wants to Kill Himself (2002) R  Wilbur (Jamie Sives) is a man who has spent most of his life in and out of mental institutions. Wilbur also keeps trying to commit suicide but keeps failing. He has been left his dad’s bookstore in Glasgow and lives above the store with his brother, Harbour (Adrian Rawlins). They have a consistent customer in Alice (Shirley Henderson), secretly in love with Harbour. Wilbur Wants to Kill Himself is a sweet, strange film about people trying to find their place in the world and maybe also find love. Wilbur is kind of a weird guy that you can’t help but like, and you want everything to work out for this trio. I won’t go into detail about what happens, but it's a fun, screwy film filled with quirky relationships and even stranger people.   My Rating; Bargain Matinee   Wilbur Wants to Kill Himself Info

Weird Credits: From the credits of The Fabelmans: Snow Effects Technician

Coming Soon to a Theatre Near You: Violent Night (2022) R   When a group of mercenaries attack the estate of a wealthy family, a little girl asks for help on Christmas Eve. Santa Claus (David Harbour) is about to answer the little girl's wish and finds out who has been naughty. In fact, its not going to be such a silent night after all and Santa isn't Ho Ho Hoing around.  Full of violence and Santa magic, the trailer makes this look like this could be a lot of fun.  Violent Night Website  Coming to theaters in early December. 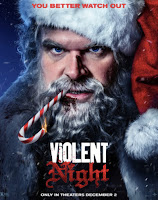 Email ThisBlogThis!Share to TwitterShare to FacebookShare to Pinterest
Labels: Bones and All, Devotion, Salvatore: Shoemaker of Dreams, Steven Spielberg, Strange World, The Fabelmans, Violent Night, Wilbur Wants to Kill Himself 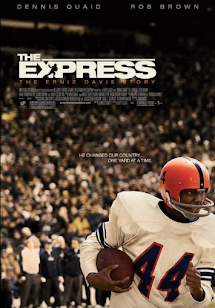