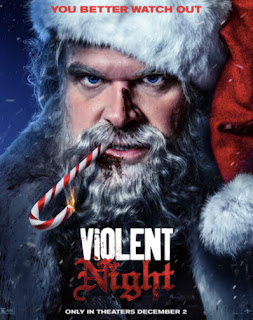 My View:   Violent Night   (2022) R   When a group of mercenaries attack the estate of a wealthy family, a little girl asks for help on Christmas Eve. Santa Claus (David Harbour) is about to answer the little girl's wish and finds out who has been naughty. In fact, it's not going to be such a silent night after all. I had high hopes for this film, not because I thought it would be great but because it would be fun, but because I was let down by a lack of creativity in the script and some rather lame fight sequences. I think I wanted more superhero from Santa, but instead, we get a washed-up, lost 'the Christmas spirit' Santa that became too much of a downer. I enjoyed David Harbour in the role, and it looked like he was having fun, but that joy didn’t always translate to the storyline. Next time have Santa come in swinging instead of swigging a lot of beer.  My Rating: Cable   Violent Night Website  Now playing in theatres nationwide. 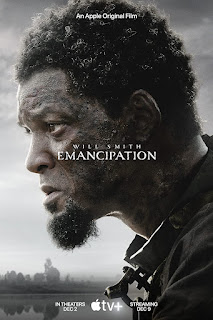 My View: Emancipation (2022) R Peter (Will Smith) is a slave who has been taken from his family to a new plantation. Peter learns that the Union Army is near and escapes cold-blooded hunters and the unforgiving swamps of Louisiana on his quest for freedom and to see his family again. This film tells the story of slavery from the perspective of one man, Peter, a devoted family man who believes with his whole heart in God. When taken away from his family to work building a railroad for the Confederacy under unimaginable circumstances, Peter is determined to escape and find his way back to his family. I had several problems with this film. We spend so much of the movie in the swamp with Peter battling everything from dogs to snakes to gators to men on horseback that it makes the film seem like a man vs. nature film instead of about the man himself. Secondly, I had a hard time on why a man named Fassel (Ben Foster), the man everyone looks to capture and bring back escaped slaves, is so determined to chase down one man when so many men have escaped from the work camp. We get some background information on Fassel’s upbringing, but why is Peter singled out for Fassel to go so far as to go to the edge of the Union Army to bring Peter back? This isn't the Oscar vehicle I'm sure the studio and Will Smith envisioned it would be. Emancipation is based on a real man, Peter, whose photograph shocked the world and changed the hearts and minds of many when it was published, and that moment is potent and moving, but it’s not enough to make this film rise above it, being just another ordinary escape film.   My Rating: Bargain Matinee  Emancipation Info Now playing in select theatres and Apple TV+ on Friday, December 9, 2022. 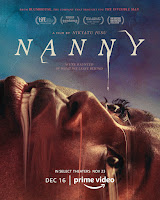 Indiefest: Nanny (2022) R  Aisha (Anna Diop), an immigrant nanny who starts a new job for an Upper East Side family. Aisha is working toward making enough money to bring her son from Africa to join her. However, Aisha begins seeing things in her dreams and real life that becomes terrifying and could destroy her hopes for her future. Anna Diop is exceptional in the role of Aisha, a woman who isn’t afraid to stand up for what she is due and loves her child so much that she is willing to work as hard as it takes to bring him to her. The film has been marketed as a horror film, and it really isn’t one, though it sometimes tries to be one. It’s more of a psychological delve into how our dreams and fears can overwhelm us. The film tries too hard to bring in the horror aspect, making it seem less real to the viewer and taking away some of the impact and power of the emotional scenes that Aisha experiences. I was disappointed by this film because it never could quite figure out what it was; a horror film or a drama, and it wasted a performance that could have been even better.   My Rating: Bargain Matinee  Nanny Website Now playing in select theatres and on Amazon Prime on Friday, Dec. 16, 2022. 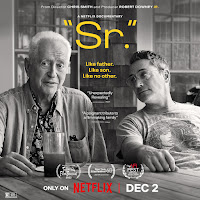 Indiefest: SR. (2022) R Documentary on the life and career of Robert Downey Sr., the director of irreverent films in the 70s and 80s, who became a latter-day actor (Boogie Nights, Magnolia), and was, of course, the father of Robert Downey Jr. I was never a big fan of Robert Downey Sr.’s films. They were always way too out there, too absurdist for my taste. However, I did enjoy this loving tribute to the man by a son who, like his father, has lived a life full of obstacles along the way. What we get with this film is a sweet, kind look at a man who made many mistakes, especially with his son, but in later life has found humor and peace to live out his final days. What sticks with me is the family's love on-screen during the final scenes with Sr. and how adored he was by everyone, including his son.   My Rating: Full Price  SR. website  Now playing on the Netflix platform.

Familyfaire: Darby and the Dead (2022) PG-13 Darby Harper (Riele Downs), who, after suffering a near-death experience in her childhood, sees ghosts and helps them travel to the great beyond. Darby is an outcast at school, but all that is about to change when the most popular girl in her high school, Capri (Auli’i Cravalho), dies and needs Darby’s help. The first third of this film is a lot of fun, but unfortunately, the film falls into the trap of going for the easy story of letting fame and success go to your head before the redemption in the final act. I think younger teens will enjoy the antics of the high schoolers, but the rest of us will grow tired of the storyline and the predictable plot.   My Rating: Cable  Darby and the Dead Website  Now playing on the Hulu platform.

Indiefest: Clean Slate (2021) Documentary about two friends in a Southern drug recovery program who decide to make a short film to express their struggles with recovery and the pain they have caused their families. This is an inside look at how hard it is to stay clean and sober, no matter how much support and help you have. You go on a journey with these two men to make a film, and the end result is success but not without heartache, lots of work and hope, lots of hope. Clean Slate is a documentary that makes us look at ourselves while trying not to judge others. It's a film about encouragement and striving to accomplish something, a goal that sometimes seems unreachable but can be achieved with help, time, and lots of work. But it’s also about the people still struggling to stay alive, the people who haven’t failed; they just have a long road to go. Clean Slate is a moving film that can give anybody what they really need; hope.   My Rating: Full Price  Clean Slate Info Now playing in select theatres and On Demand.

Forgotten Film:  Arthur Christmas (2011)  PG  In this animated film, Santa (voiced by Jim Broadbent) is getting ready to retire...which of his two sons will follow in his footsteps? Steve (voiced by Hugh Laurie), the older son, is Santa’s right hand and runs Santa’s workshop with military precision. Arthur (voiced by James McAvoy), the younger son, is a wide-eyed lover of all things Christmas, but Arthur’s optimism can get the best of him, and sometimes he is just a little too eager to please. On Christmas Eve, it’s discovered that one present has not been delivered, and Arthur decides to make sure that everyone’s Christmas is a merry one. I enjoyed this film, and it plays to both kids and adults as it has humor aimed at both. The best part of this movie is the army of elves that help run the massive operation, as they deliver gifts with the skills of a gymnast and the stealth of a ninja. Arthur Christmas is an enjoyable film, and it’s very inventive in describing how Santa delivers all his presents on Christmas Eve.   My Rating: Full Price Arthur Christmas Info

Weird Credits: From the credits of Nanny: Haze Operator

Coming Soon to a Screen Near You: A Man Called Otto (2022) PG-13 Otto (Tom Hanks) is a grumpy old man who just wants to be left alone after the loss of his wife. Otto’s world will be turned upside down by a new family next door and a cat that won’t leave him alone. I loved the 2015 Swedish two-time Oscar-nominated film, A Man Called Ove, that this film is based on.   A Man Called Otto Website  Coming to theatres Mid-January, 2023. 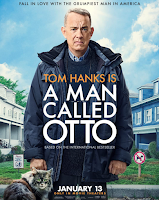