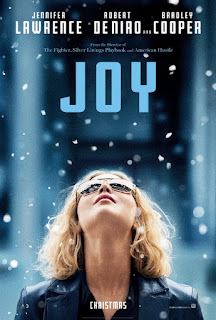 My View:  Joy  (2015) PG-13   Joy Mangano (Jennifer Lawrence) is a single mom who lives with her two kids and her mother (Virginia Madsen). Joy has an idea for a mop that is revolutionary, but can she get anybody to back her idea? First, the good: the scenes between Lawrence, who plays the the fiery Mangano and Bradley Cooper, who plays the head of the home shopping channel, QVC, are some of the best of the film. The bad:  those scenes are few and far between. My biggest problem with this film is the dialogue is very uneven, due to the director, David O. Russell, allowing his actors to improv their lines. The movie works when the actors have great timing and chemistry, like with Lawrence and Cooper. It doesn’t work when they don’t, like scenes between Lawrence and Elisabeth Rohm, who plays Joy’s sister. The film is too long and takes forever to get to the QVC scenes. I liked Virginia Madsen as Joy’s home-bound mother, but I thought that Robert De Niro, who plays Joy’s dad, went way over the top in his role. The film never seems to find its pacing and never quite finds sure footing for Lawrence to really shine.   My Rating: Bargain Matinee   Joy Website

My View:  The Big Short  (2015)  R  Four outsiders in the world of big banking predict the housing market is going to collapse in 2008. Can these four outsiders take on big banks and make money doing it? This is a funny, creative film that, in one moment will make you laugh, and then, in the next moment, will piss you off. The ensemble cast is scintillating with a couple of real standout performances. Christian Bale plays the brilliant but strange Michael Burry, the man who figures out that the housing market is about to crash. Bale gives his everything to an intense, quirky role that only he can do. Steve Carell gives a scintillating performance as the always angry Mark Baum, who decides to go all in on the theory that the crisis will happen I don’t want to ruin anything, but there are some really funny celebrity appearances to explain the very complicated financial workings. I never thought I would thoroughly enjoy a film about banking and housing, but this film makes it a blast to watch.    My Rating: I Would Pay to See it Again   The Big Short Website

My View:  Daddy’s Home  (2015)  PG-13  Brad (Will Ferrell) is trying to be the best step-dad he can to his wife’s (Linda Cardellini) two kids. Everything changes when Dusty (Mark Wahlberg), the kid’s real father,  comes to town. While not a bad film, this movie just doesn’t have enough funny scenes to make it totally enjoyable. As with a lot of these go for the quick joke films, most of the best comedic bits have ended up in the trailer, making the film feel very slow, not something you want from a comedy. While not dazzling, the chemistry between Ferrell and Wahlberg is credible. There are a few scenes making fun of film product placement that are out and out funny. I did like the last fifteen minutes. I just wish the first hour and twenty minutes had matched that level.   My Rating: Bargain Matinee   Daddy's Home Website

My View:  Concussion  (2015)  PG-13  A brilliant forensic neuropathologist (Will Smith), discovers CTE, a football-related brain trauma in a pro player and puts him at odds with the billion dollar National Football League. Before this film came out, many critics were thinking that this might be an Oscar contender for the film and Will Smith. While a servable film, it is not Oscar quality. Smith gives the role his all, but the film never hits the emotional impact it desperately needs. I think the weakness of the film is that it tries to cover too many topics over too many years. It’s very one sided and never talks about the advances that the NFL has made in the past few years dealing with concussions and football. It’s a film that feels it wanted to make too many points and missed on just about all of them.    My Rating: Bargain Matinee   Concussion Website

Indiefest:  Carol  (2015)  R   Set in 1950s New York, Therese (Rooney Mara) is a department-store clerk who dreams of a better life. She meets and falls in love with an older woman, Carol (Cate Blanchett). This is a beautiful film that takes its time with the love story between Carol and Therese. It captures 50’s New York City perfectly, as we travel from the posh, stylish settings that make up Carol’s life to the contrasting life of Therese and her hard-living friends. Blanchett is utterly mesmerizing as the sophisticated Carol, who set her sights on the slightly naive Therese. Rooney makes this film worth watching as she holds her own on the screen with the two-time Oscar winner Blanchett. You will be captivated by their story and will root for them to find a way to succeed in the world that works against them.    My Rating: I Would Pay to See it Again   Carol Website

Indiefest:  The Hateful Eight  (2015) R   In post-Civil War Wyoming, John “The Hangman” Ruth (Kurt Russell) is escorting fugitive Daisy “The Prisoner” Domergue (Jennifer Jason Leigh) to Red Rock where the latter will face justice for murder. They encounter a group of strangers at a stagecoach stop, including another bounty hunter named Major Marquis Warren (Samuel L. Jackson).  I had a blast watching this film, but be warned, this is a violent and bloody film full of some very uncomfortable scenes.  The second half of the film mostly takes place in one room, but the movie fully utilizes the 70mm format, taking what could have been a very claustrophobic film and turning it into a film that thrills the senses. This is truly an ensemble piece with Jennifer Jason Leigh as the unruly prisoner and Samuel L. Jackson as the wisecracking bounty hunter standing out from the rest of the cast. I also enjoyed Tim Roth as a chatty hangman. The film doesn’t feel like it’s almost 3 hours long, moving at a quick pace with witty dialogue. I will warn you -  there is a scene near the end of the film that is quite disturbing and not for someone with a weak stomach. While not for everybody, if you like or love Quentin Tarantino films, you will have a great time watching this one.   My Rating: I Would Pay to See it Again   The Hateful Eight Website

Forgotten Film:  Love with the Proper Stranger (1963)  Angie Rossini (Natalie Wood) is a salesclerk at a department store who, after a one night stand, finds out that she is pregnant.  She finds the one night stand, a musician named Rocky (Steve McQueen), who doesn’t remember her. They decide to work together to figure out their next step. The film, while not clicking on all levels, does work because the chemistry between Woods and McQueen jumps off the screen. They work perfectly together, and it looks as though they had fun making this film.  My Rating: Bargain Matinee   Love with a Proper Stranger Info

Weird Credits:  From the credits of Concussion:  Police Radio Voice

Coming Soon to a Theatre Near You: The Revenant  (2015) R   From the director of Birdman, Alejandro Gonzalez Inarritu, is a tale of a man in 1820’s who is attacked by a bear and left for dead.  He then struggles to survive in the wilderness. Many critics feel that Leonardo DiCaprio could win an Oscar for this role.   The Revenant Website 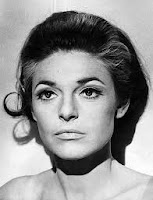