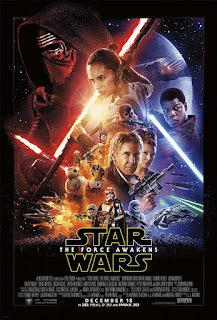 My View:  Star Wars: The Force Awakens  (2015)  PG-13   Luke Skywalker (Mark Hamill) is missing, and that has caused a ripple effect throughout the Galaxy. What was left of the evil Empire has reformed in what is called the First Order, and they are intent on destroying the Rebels once and for all. I loved this film. It does a great job of giving us some of the classic characters from the first three Star Wars films while introducing us to a new cast that take up the ‘Star Wars’ mantle. The film looks like (with updated special effects) and has the aura of a Star Wars film, giving you a feeling that you are back with a storyline and characters you know and love. While paying an homage to the past films, it gives us some exciting players that it introduces to the timeline. Rey (Daisy Ridley) is a scavenger that dreams of bigger things and somehow knows that she is destined to explore more than just her desert filled planet. Finn (John Bodega) is a man who is trying to escape his past, but fate keeps getting in the way. Poe Dameron (Oscar Isaac) is a brash fighter pilot whose skill matches his bravado. All three are about to go on an adventure of a lifetime to try and stop the First Order. The chemistry between Bodega and Ridley is the key to this film and their scenes together make the film work as well as it does. The film is full of great action sequences that will thrill you and surprisingly, there is a great deal of comedy, mostly through the fast quips that the first films were so good at. Filmmaker JJ Abrams is a fan of the original films and it shows. He gives us exactly what we wanted from this series, a new hope. Oh, and by the way, go out now and buy a BB-8 toy (it's the new round droid). Your kids are going to want one after seeing this film.   My Review: Full Price   Star Wars: The Force Awakens Website

My View:  Sisters (2015)  R  Katie (Tina Fey) and Maura (Amy Poehler) are completely sisters with completely opposite personalities. Katie is childish and sleeps around. Maura is uptight and still hasn’t gotten over her divorce. The sisters decide to hold one last party at their parent’s home before it is sold. I expected more from this film due to Poehler and Fey, but I got a lot less than I needed. The film takes forever to get started, only really moving when the “party” starts going. Of course, Fey and Poehler have great chemistry on screen, and there are times when the two play off each other with great comic timing. But the film drags when the two are separated, and it’s about thirty minutes too long. I was disappointed by John Cena’s performance, but that wasn't his fault, his part is badly written. The film’s finale is predictable, and its resolution isn’t very satisfying. I would love to party with these two women but just in a different movie.    My Rating: Bargain Matinee  Sisters Website

Indiefest:  The Danish Girl  (2015)  R  In the early 1920s, artist Gerda Wegener (Alicia Vikander) and her artist husband, Einar Wegener (Eddie Redmayne) are living in Copenhagen.  Einar slowly realizes that he is no longer happy living as a man. I wish this was a better film. Redmayne’s performance never won me over. I don’t know if it is because we don’t get a lot of exploration of Einar’s innermost feelings, as we just get a lot of Redmayne crying or posing with his hands. I did enjoy another brilliantly subtle performance by Alicia Vikander who plays a woman who is slowly losing her husband. The film feels like it would rather give us a beautiful looking shot than let us explore the character's motives.    My Rating: Bargain Matinee   The Danish Girl Website

Indiefest:  Youth  (2015)  R  A retired orchestra conductor (Michael Caine) is on a vacation with his daughter (Rachel Weisz) and his friend (Harvey Keitel), a film director, when he gets an invitation to perform one of his compositions in front of Queen Elizabeth II. This is a fun film to watch due to the magnificent performances by Caine, Weisz and Keitel. The film is basically conversations, some of them quite abstract, dealing with life’s problems - finding and keeping love, aging,  and dealing with the past, mistakes and all. The film goes on too long, and the plot is sometimes hard to follow, both which bring down the film in my eyes. While a flawed film, it is a joy to watch some master actors spin their craft.   My Rating: Bargain Matinee   Youth Website

Forgotten Film:  Prime Cut (1972) R   A mob enforcer (Lee Marvin) is sent from Chicago to Kansas City to collect a big debt from a crime boss (Gene Hackman). This is not your normal mobster film, and that is evident right from the start. The film mixes satire with almost cartoon-like characters that seem to come straight out of a Dick Tracy comic strip. It’s filled with action sequences that are thrilling and fast-moving. Sissy Spacek shines as a naive orphan who is being sold into slavery after complicating the mob enforcer’s life. This is not a complex film, but it is one that you will enjoy.     My Rating: Bargain Matinee    Prime Cut Info

In Memory of Ed Wood (A Movie I've Only Seen in Trailers But Just Looks Like a Bad Idea):  Ride Along 2 (2015)  PG-13  The first buddy-cop film wasn’t bad, but it wasn’t so good that we would want to see another. To make this one completely different, instead of Atlanta, the guys go to Miami.  I think I will just pass on this ride.   Ride Along 2 Website

In Case You Missed It (A Film Just Released on DVD / Blu-ray): Mission: Impossible Rogue-Nation  (2015)  PG-13  The incoming CIA chief (Alec Baldwin) wants to disband the Impossible Mission Force, just when we need Ethan (Tom Cruise) and the gang the most. This film is certainly the best film of the Mission: Impossible series and was one of my favorite films of the summer. The movie starts off with a breathtaking stunt and just keeps going from there. There is a motorcycle chase sequence that is one of the best chase scenes I have ever seen. I loved the “bromance” between Cruise’s character, Ethan and Simon Pegg’s Benji, with some great lines flowing. Rebecca Ferguson held her own with Tom Cruise (not easy to do) and makes a number of action sequences believable. Sean Harris makes a great bad guy, and Alec Baldwin is fun as the CIA chief. MI Rogue Nation is a blast to watch and has a plot that makes sense.     My Rating: Full Price   Mission Impossible: Rogue Nation Website

Weird Credits:  From the credits of Star Wars: A Force Awakens:  Wire Supervisor

Coming Soon to a Theatre Near You:  Race  (2016)  PG-13  The story of Jesse Owens (Stephan James) and his quest to become the world’s greatest athlete, all on the stage of the 1936 Olympics in Adolf Hitler’s Germany. Jesse Owens has always fascinated me, and this film looks like it captures the time and mood of that very complicated period of American history.   Race Website 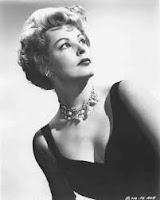