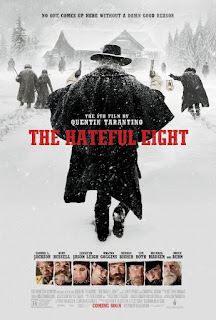 Indiefest:  The Hateful Eight  (2015)  R   In post-Civil War Wyoming, John “The Hangman” Ruth (Kurt Russell) is escorting fugitive Daisy “The Prisoner” Domergue (Jennifer Jason Leigh) to Red Rock where the latter will face justice for murder. They encounter a group of strangers at a stagecoach stop, including another bounty hunter named Major Marquis Warren (Samuel L. Jackson).  I had a blast watching this film, but be warned, this is a violent and bloody film full of some very uncomfortable scenes.  The second half of the movie mostly takes place in one room, but the movie fully utilizes the 70mm format, taking what could have been a very claustrophobic film and turning it into a film that thrills the senses. This is truly an ensemble piece with Jennifer Jason Leigh as the unruly prisoner and Samuel L. Jackson as the wisecracking bounty hunter who stand out from the rest of the cast. I also enjoyed Tim Roth as a chatty hangman. The film doesn’t feel like it’s almost 3 hours long, as it moves at a quick pace with witty dialogue. I will warn you -  there is a scene near the end of the film that is quite disturbing and not for someone with a weak stomach. While not for everyone, if you like or love Quentin Tarantino movies, you will have a great time watching this one. The film is being shown in select theatres in 70mm film and nationwide in the standard digital format.    My Rating: I Would Pay to See it Again   The Hateful Eight Website

The 50  (A Movie from My Best/Worst Films of All Time)  #3 Best Film:  The Godfather Part II (1974)  R   We see the origins of The Godfather as Vito Corleone (Robert De Niro) finds his way in the streets of 1920’s New York City. We also experience Michael Corleone (Al  Pacino) tightening his grip on his growing crime syndicate in 1958 as it stretches from Lake Tahoe, Nevada to pre-revolution Cuba. This is one of the few times that a sequel is better than the original movie. De Niro gives a masterful performance as the young Vito Corleone. There is a sequence where Vito is moving across rooftops, tracking the man he is going to kill as he winds his way through the streets of a neighborhood celebration. Al Pacino is equally impressive, especially in a scene with John Cazale, who plays his older brother, Fredo. Pacino delivers one of the great lines in cinema as he tells his brother “I know it was you, Fredo. You broke my heart. You broke my heart!” The final sequence of the film is a brilliant piece of filmmaking by a director, Francis Ford Coppola, who was in his prime.   My Rating: I Would Pay to See it Again

Forgotten Film:  Medium Cool (1969)  R  John Cassellis (Robert Forster) is a hard nose reporter who always gets his story. He discovers that his network is cooperating with the FBI to give them ways of identifying protesters of the Vietnam War. When he protests this, he is fired. Cassellis decides to document the planned protests at the 1968 Democratic National Convention in Chicago, Illinois. The film was written and directed by one of the greatest cinematographers of all time, Haskell Wexler. Wexler uses a documentary style to mix real footage of the convention with dramatic pieces, which makes you feel as if you are there, in the middle of scenes. The camera work in this film is beautiful and brilliantly blended between conventional  shooting and handheld shots. The film is enhanced by a soundtrack that includes songs by Frank Zappa.  Forster is perfect in the role of a reporter who won’t let the system beat him down.    My Rating: Full Price   Medium Cool Info

In Memory of Ed Wood (A Movie I’ve Only Seen in Trailers But Just Looks Like a Bad Idea):  Fifty Shades of Black (2016)  A parody of the film Fifty Shades of Grey.  Is there any way we can stop Marlon Wayans from putting out any more of these crappy types of films?

In Case, You Missed It (A Film Just Released on DVD/Blu-ray):   Ant-Man  (2015)   PG-13   Scott Lang (Paul Rudd) is a car burglar who is hand-picked by Dr. Hank Pym (Michael Douglas) to become Ant-Man.  Ant-Man can decrease in size but, also, can increase in strength. I enjoyed this film that is more in the vein of Guardians of the Galaxy with the amount of humor in it and the hero of the story who is dependent on his wits, rather than a superpower. I liked Rudd in the role, as he has a smart-ass quality to him, but not so much that you don’t like him. He plays off of both Michael Douglas and Evangeline Lilly (who plays the daughter of Dr. Pym), and there are some real sparks between Lilly and Rudd. Corey Stoll plays the villain well, bringing just enough menace to the role to make it enjoyable to watch. The action sequences are fast moving and exciting with some creative scenes that make the film a blast to watch. Once again, I think you can save some money and see it in 2-D. There are two bonus scenes worth staying for; one after the first portion of credits and one at the very end of all the credits.    My Rating: Full Price   Ant-Man Website

Weird Credits:   From the credits of The Hateful Eight: Cat Trainer

Coming Soon To a Theater Near You:  Deadpool  (2016)  A former Special Forces operative turned mercenary (Ryan Reynolds) has cancer and is about to die. He is offered a way to live if he lets himself be the subject of a rogue experiment. That procedure gives him accelerated healing powers, and he decides to become Deadpool. The studio has done an excellent job in marketing this film with very funny print ads and even better trailers.   Deadpool Website 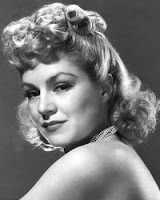