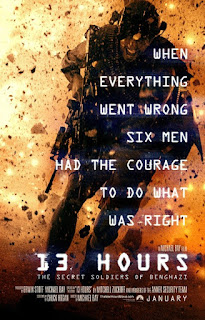 My View:  13 Hours: The Secret Soldiers of Benghazi (2016)  R  On the evening of the eleventh anniversary of the September 11th attacks, a group of Islamic militants attack the American Embassy.  A group of six CIA security contractors undertake a desperate attempt to defend the Embassy and the American Ambassador.  I enjoyed the action sequences, and there are plenty of them, though some during the first half of the film are very confusing, and I wasn’t able to tell the good guys from the bad. The final firefight is exciting and well-choreographed. I liked the cast and felt that John Krasinski was especially believable as a former Navy SEAL. My biggest problem with this film is that it hits you over the head with trying to tug on your heart-strings. There is too much talk from the guys about how much they miss their family and how they wished they had done things differently. We get that idea very early in the film when all the major participants interact via the web with their families. We don’t need to be constantly reminded that they are fighting for their kids back in the states.  My Rating: Bargain Matinee   13 Hours Website

Family Faire:  Norm of the North  (2016)  PG Norm (Rob Schneider) is a fun-loving polar bear who loves to dance.  With the help of three lemmings, Norm travels to New York City to try and stop a real estate developer from building homes in the Artic. Unfortunately, this is another in a long line of dull and unimaginative animated films. Only small children will like this film, and anyone over ten will start looking at their watches thirty minutes into it, wondering when it will end. The storyline is stupid (think a plotline from a bad  70s Saturday morning cartoon), and you see the ending coming from almost the start. I should have been clued into how bad this would be by the actor in the starring role, Rob Schneider.    My Rating: Cable   Norm of the North Website

Indiefest:  Anomalisa  (2015)  R  Michael Stone (David Thewlis) is a man who is unable to interact deeply with other people, even though he specializes in books about customer service.  When he goes on a business trip, he meets an extraordinary stranger (Jennifer Jason Leigh) who changes his life. Let tell you right off the bat, this is a very adult stop-motion animated movie, with language, a graphic sex scene and full frontal nudity. It’s a moving film with a main character that while flawed, you connect with and want him to find happiness. The animation is stunning and extraordinarily fluid. It’s a movie that touches both the heart and the mind. The storyline is a little hard to follow at times but overall it’s and experience you don’t want to miss. Just don’t take the kids.  My Rating: Full Price   Anomalisa Website

Indiefest:  Lamb  (2015)  R  A man (Ross Partridge) meets a young girl (Oona Laurence) in a parking lot and decides to take her on a trip to show her the beauty of the outside world.  It’s a journey that will shake them in ways neither expects. First, let me say that this is a very uncomfortable film to watch. There is an attraction between the 47-year-old man and the eleven-year-old girl that gets creepier as the film goes along. While it never goes beyond hugging, it still looms over the film. But that is what this movie is about, two people who are hurting and empty, finding each other, knowing that their time together is fleeting. Partridge and Laurence have great chemistry, which is immensely important for this film to work.  Laurence makes this film worth watching, giving a performance that is filled with wonder and depth.  But, be warned.  You will be squirming in your seat throughout the film.   My Rating: Full Price   Lamb Info

Indiefest:  Mustang  (2015)  PG-13  Sisters Lale (Günes Sensoy), Nur (Doga Zeynep Doguslu), Selma (Tugba Sunguroglu), Ece (Elit Iscan), and Sonay (Ilayda Akdogan) are orphans, living with their grandmother (Nihal G. Koldas) and uncle (Ayberk Pekcan). It’s the last day of school and after a rather tearful good-bye to Lale’s favorite teacher, the girls decide to walk home. Along the way, they meet some boys and head to the beach. The girls and boys play innocently in the water, at one point the girls climbing on the boy’s shoulders to play a game of chicken fight. They are accused of being promiscuous by their grandmother and uncle, and the two decide to confine the girls to the house until suitable husbands can be found for the girls. Director / co-writer  Deniz Gamze Erguven brings to the screen a tale that treats its subjects with a caring touch, dealing with repression, but never quite delivers the emotional punch that you want. The film spends much time on the girls’ confinement and their various attempts to escape, as each attempt brings more barriers to their potential freedom. We spend too much time following the girls around the house as they try to fend off boredom, playing silly games. This film feels far longer than its 97 minutes running time, and you come away with the feeling that we never really got to know the girls. All we know is that most of the girls didn’t want to get forced into marriage at such an early age.   We never got to find out their hopes and dreams, which, I believe, would have made the film a much richer viewing experience.    My Rating: Bargain Matinee   Mustang Website

Forgotten Film: Truly, Madly, Deeply  (1991)  PG   A woman, Nina (Juliet Stevenson) is mourning the loss of her one true love, Jamie (Alan Rickman). She is not taking it well, unhappy with her life and is missing her man. All of a sudden, Jamie appears back from the dead. Be careful what you wish for, because life with the man she lost forever isn’t what she had hoped for. And now she must choose to stay in the past or move forward to the future. This is a strange and beautiful film where the characters not only love each other, you also know they like each other. Stevenson gives a raw, emotional performance matched equally by the warm, nuanced performance by Rickman. This is a film that will stay with you for a while and is well worth the experience.   My Rating: Full Price   Truly, Madly, Deeply Info

Weird Credits:  From the credits of 13 Hours: The Secret Soldiers of Benghazi: Military Webbing Assistant


Coming Soon to a Theatre Near You:  The Finest Hours (2016)  PG-13  In 1952 the Coast Guard makes a daring rescue attempt off the coast of Cape Cod during a blizzard. The trailer makes this film look like one not to miss. The film stars Chris Pine, Casey Affleck and Holliday Grainger.   The Finest Hours Website 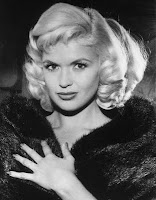