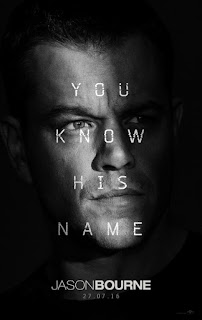 My View:  Jason Bourne  (2016)  PG-13  Jason Bourne (Matt Damon) now remembers who he is, so, it's time to find some answers.  I have liked the Bourne series, especially the action sequences. After a great opening scene where Bourne takes a fighter down in one punch,  the film quickly goes downhill with sloppy fight sequences shot in “shaky cam” style and a car chase sequence that was so badly done it was hard to figure out what was happening. The chase through the streets of Las Vegas was so ludicrous that, when the chase ends with one of the cars crashing into a casino, I was expecting a close up of a slot machine dinging and giving up coins. Some of the dialogue, especially those delivered by Tommy Lee Jones, are laughable. I was disappointed in the bland performance that Alicia Vikander gave, though I suspect that the script, which has her n line to be the CIA director at age 28, had a great deal to do with said performance. Mr. Bourne, it's time to retire.   My Rating: Cable   Jason Bourne Website

My View:  Nerve  (2016)  PG-13  A high school Senior, Vee (Emma Roberts), tries out an online game of truth or dare. At first, the game is easy, and the rewards are worth the risk, but soon, it is very evident that Vee is in over her head, and this game could become deadly.  Back in 1995, when The Net was released, we didn't know enough about computers to know that Sandra Bullock couldn't really bring down the internet with a floppy disk. It's 2016 and even I know that a couple of teen hackers are not going to be able to take down an internet game with a couple of keystrokes, but that's what this film wants you to believe.  I enjoyed the first half of this film, mostly because the dares that Vee gets were creative and fun. The film starts running out of gas when the dares become more dangerous and less creative. I did enjoy the performance of Emily Meade, who plays Roberts’ more adventurous best friend, which gives some life to the film. Unfortunately, the film's ending, which can be seen from a mile away, is just too simple to really work.   My Rating: Bargain Matinee   Nerve Website

My View:  Bad Moms  (2016)  R  Three moms (Mila Kunis, Kathryn Hahn, Kristen Bell) have been pushed to their limit by the PTA, making lunches and managing after-school activities for their kids. It's time for the moms to hit back and have some fun. I had a great time watching this movie.  While it takes a little while to take off, once Kathryn Hahn’s raunchy mom shows up, the film is a blast to watch. The three women play off each other effortlessly and they all have great comedic timing. Christina Applegate is perfect as the mom who runs the PTA with an iron hand. Go have a glass of wine and enjoy your time with some “Bad Moms.”   My Rating: Full Price   Bad Moms Website

Indiefest:  Café Society  (2016)  PG-13  Bobby Dorrman (Jesse Eisenberg) leaves his home in New York in the 1930's and moves to Hollywood to try and make a name for himself. He lands a job with his Uncle Phil (Steve Carrell).  While in Hollywood, Bobby meets Phil's secretary, Vonnie (Kristen Stewart). He begins dating Vonnie not knowing that she is secretly having an affair with his uncle.  Who would have thought that after that first Twilight film I would be saying this, but Kristen Stewart has become one of my favorite actresses, and she doesn't disappoint  with a dazzling performance in this latest Woody Allen film. This is a beautiful film to watch, and it's clear that Allen has a reverence for the Hollywood of yesteryear. This is an enjoyable film, though I did want it to be funnier as it has too little out and out laughs.   My Rating: Bargain Matinee   Cafe Society Website

Indiefest:  Eat That Question: Frank Zappa in His Own Words  (2016)  R  In-depth documentary about the life and music of legendary avant-garde musician Frank Zappa. This is one of the best documentaries of the year. The film does not have a narrator but lets Zappa, appearing on talk shows and interviews with reporters, tell his story. I never have been a fan of his music, finding it very strange and involved, but I always was a fan of the man, himself, and this film just confirms my admiration. The film is full of rare footage of concerts that show just how crazy Zappa's music was.  This is a fascinating film about a very complex and complicated man.   My Rating: I Would Pay to See it Again   Eat That Question Website

Forgotten Film:  The Night Before  (1988)  Winston (Keanu Reeves) wakes up in the middle of the street, his date is missing, his car is gone, and his tux jacket is full of money. When he starts remembering his night, he will probably want to forget it. This is a strange coming-of-age teen comedy that I like because halfway through the film, it becomes a little dark. It seems that Winston, in a drunken state, has sold his prom date (Lori Loughlin) to a local pimp, and he has to rescue her before she gets sold to a sex slave dealer. I told you it goes a little dark. It's not a great film, but if you want something a little different, this will fill the role.   My Rating: Bargain Matinee   The Night Before Website

Coming Soon to a Theatre Near You:   The Edge of Seventeen (2016)  High school life for Nadine (Hailee Steinfeld) is already pretty bad, but it gets worse when her best friend (Haley Lu Richardson) starts dating her popular older brother (Blake Jenner).  I love Woody Harrelson in the trailer as Nadine's teacher that she looks to for guidance.   The Edge of Seventeen Info 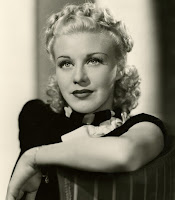