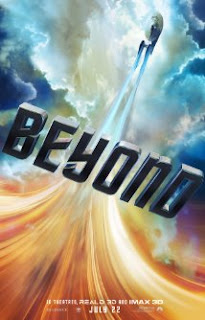 My View:  Star Trek Beyond  (2016)  PG-13  The USS Enterprise is halfway into their five-year mission. The ship is attacked by an unknown alien force and, after having to abandon ship, the crew finds their lives are hanging in the balance. This is the first for the reboot series not to be directed by J.J. Abrams, so no more lens flare in every shot. What I liked about this film is that this series is no longer the Kirk and Spock show as this movie allows the rest of the cast to share the spotlight, especially Zoe Saldana, who plays Uhura, whose character is just as important to the plot as Kirk and Spock. Idris Elba is everything you want in the bad guy, strong and powerful with a great screen presence. The film moves at a fast pace, the action sequences are well done, and the film deals well with the passing of Leonard Nimoy, who was such a vital cog in the first two reboot films. You will love how they battle the bad guys near the end of the film. Overall, even a mild Star Trek fan is going to thoroughly enjoy this movie. Beam me up Scotty!  My Rating: Full Price   Star Trek Beyond Website

Family Faire:  Ice Age: Collision Course  (2016)  PG   Manny (Ray Romano), with the help of Buck (Simon Pegg), must lead his family and friends on a journey to try and find a way to stop an asteroid from hitting the earth.  Can Blue Sky Studios and 20th Century Fox please stop making these films?  The series wasn’t the strongest of animated ideas, to begin with, but now it’s downright annoying.  The film features the weakest of the Ice Age characters, Scrat, the acorn-addicted squirrel. This movie isn’t fun or funny, and the kids that were at my screening couldn’t care less about the film. You know it’s a bad film when you look at your watch two hours into the movie, and it’s really only been thirty minutes.    My Rating:  You Would Have to Pay Me to See It Again   Ice Age: Collision Course Website

My View:  Lights Out  (2016) PG-13   Rebecca (Teresa Palmer) and her brother Martin (Gabriel Bateman) are being tormented by a spirit that is only visible in the dark.  I normally don’t like the “jump out of the dark” kind of scary movies, but this is the exception to the rule. The bad guy in this film is some sort of Demon who lives in the dark and can’t stand the light. Teresa Palmer is perfect as the strong-willed and slightly flawed Rebecca.  Maria Bello, as Rebecca’s mentally unstable mother, is ablaze on the screen, giving a frenzied performance of a woman on the hinge of insanity. There are plenty of screams built into this rollercoaster ride of a horror film.    My Rating: Full Price   Lights Out Website

My View:  Absolutely Fabulous: The Movie  R  Edina (Jennifer Saunders) and Patsy (Joanna Lumley) are having to hide out in the south of France after causing a worldwide incident by knocking Kate Moss into the River Thames.  I was a big fan of the TV show so I’m sorry to say that the Ab Fab girls should have stayed away from the big screen.  The laughs are too few and far between, and the humor is very broad, which most of the time lands with a thud. The film feels as if it was only made for a British audience.  I didn’t recognize some of the countless cameos in the movie that maybe were lost on me.  I guess we just can’t revisit the 90’s, at least not with these two.  My Rating: Cable   Absolutely Fabulous Website

Indiefest:  Captain Fantastic  (2016) R  Ben (Viggo Mortensen) is raising his family of six kids “off the grid” in the forests of the Pacific Northwest. His wife suddenly dies while she was away in an institution for the treatment of bipolar disorder. Ben, against the wishes of his wife’s parents, decides to take the family on a road trip to his wife’s funeral.  Mortensen is a force of nature on the screen as the father who is trying to keep his very unusual family together. Right from the start you know this is not a normal family, as we see the kids hunt down and kill a deer with only a knife. We see the family dynamic at work as the family returns to their home out in the wilderness.  Some of the kids are dressing the deer as others read or make art, all the while the father tells them they have training in an hour. This film is a treat to watch, mostly due to the kids in the cast.  Each one of them has great chemistry with Mortensen, making this strange family seem real. This is part a coming of age film and part travel film, as the family experiences things like junk food for the first time. This movie is a joy to watch, and you will root for this family to succeed in its “mission.”    My Take:  Full Price   Captain Fantastic Website

Indiefest:  Microbe and Gasoline  (2015)  R  Daniel (Ange Dargent) and Theo (Theophile Baquet) are two misfit kids who decide to build their unique car and travel across the country.  I enjoyed this coming of age adventure which explores two boys trying to figure out their place in the world. Microbe comes off as the much more serious of the two, with his several perceived problems always weighing him down. Theo is more of a fun-loving kid with a devil-may-care attitude. What I liked about this film are the conversations that the two boys have as they are on their adventure.  The chemistry between Theophile Baquet playing Theo and Ange Dargent playing Daniel is spectacular. The two share a bond on the screen that makes this film entertaining and work so well. Microbe & Gasoline is an adventure with two boys on their way to manhood.   My Rating: Full Price   Microbe & Gasoline Info

Forgotten Film:  The New Centurions  (1972) R  Roy (Stacy Keach) is a rookie cop who has joined the LAPD to make ends meet while he finishes law school. His partner is a gruff veteran (George C. Scott) who breaks all the rules to keep the streets of L.A. safe.  This is a gritty look at what it looked and felt like being a cop in a big city in the early seventies.  Scott is brilliant as the vet cop. I especially enjoyed the performance of Rosalind Cash, who plays the love interest for Keach. The film has a few flaws, feeling especially dated from time to time, but Scott and Cash make it worth a watch.  My Rating: Bargain Matinee   The New Centurions Info

Weird Credits: From the credits of Star Trek Beyond: Off Camera Singer

Coming Soon to a Theatre Near You:  Suicide Squad  (2016) PG-13  A secret government agency turns to a group of super-villains to stop a black ops mission.  If the movie is half as good as its trailers, it’s going to be astonishing. I think this will make Margot Robbie a superstar.    Suicide Squad Website 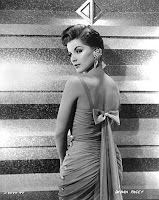 SaveSave
Posted by Mike at 1:00 AM