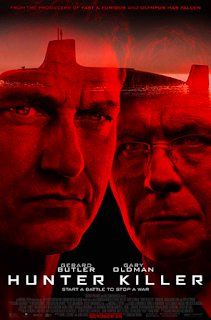 My View:  Hunter Killer  (2018) R   An untested American submarine captain (Gerard Butler) teams with U.S. Navy Seals to go on what could be a suicide mission that could start World War III, rescuing the Russian president, kidnapped by a rogue general. I went into this film thinking I wouldn’t have a good time but I quite enjoyed myself. Now the plot is pretty unrealistic, and there is some horrible, but the action sequences are well done and exciting. Butler doesn’t have to do too much, other than be stoic and commanding so that works in the film’s favor. I think most critics are going to kill this film, but I thoroughly enjoyed it.   My Rating: Bargain Matinee     Hunter Killer Website

My View:  Johnny English Strikes Again  (2018)  PG   After a cyber attack exposes all of the undercover agents in Britain, Johnny English (Rowan Atkinson) comes out of retirement to find the hackers and bring them down. I have never been a big Rowan Atkinson fan because he mugs for the camera too much. This is a one-note film, as Johnny messes things up repeatedly due to him being incredibly stupid. I think that is the biggest problem with this film because you never believe that Johnny could ever be a Jame Bond-like secret agent. I laughed a couple of times, but for the most part, the jokes and stunts fell flat.   My Rating:  Cable    Johnny English Strikes Again

Indiefest:  Beautiful Boy (2018) R   A husband and wife (Steve Carell, Maura Tierney) deal with the downward spiral of their son (Timothée Chalamet) into drug addiction. Heartbreaking and moving, Beautiful Boy is full of brilliant performances by Chalamet and Carell. The two have great chemistry on screen, and it never feels that Chalamet is acting as the raw nerve of a teenager who wants to be clean but can’t because he wants to escape life. This is a film that is going to be hard for parents to watch, as Carell’s character tries everything he can to help his son. Based on a true story, the film is a little too long (almost 2 hours in length), the film’s pace is slow, and that hurts the emotional impact that you should have, especially at the end of the film. Still, this film is another chance to see Timothee Chalamet work his magic on the screen and that’s a good thing.  My Rating: Full Price   Beautiful Boy Website

Indiefest:  Mid90s  (2018)  R   Stevie (Sunny Suljic) lives in a troubled home in 90s L.A. with a mother (Katherine Waterston) that is never there, and an older brother Ian (Lucas Hedges) that takes out his frustrations on Stevie. Stevie’s life changes when he finds new friends at the Motor Avenue Skate Shop. This is a film that is not for everyone. There are some disturbing scenes involving Stevie drinking, smoking, doing drugs and even having sex. Also, there is a ton of cursing, some of it done by Stevie, who looks much younger than his age. There is also quite a bit of violence, most of which is committed by Ian on Stevie. The film does have some humorous scenes and at times is quite enjoyable, but it’s hard to overlook the sex scene where an older teenage girl seduces Stevie at a party. I will say this that Sunny Suljic gives an incredible performance as the kid who just wants to fit in with his idols, the skateboarders. Written and directed by Jonah Hill and shot on 16mm film, Mid90s captures that time period so well that at times I thought I was watching a documentary.   My Rating: Bargain Matinee    Mid80s Website

Indiefest:  Studio 54  (2018)   Documentary by Matt Tyrnauer about the New York dance club sensation Studio 54, that led the disco craze in the mid-70s. The film is told in three acts; the creation of Studio 54, its unbelievable success, and the downfall of its two creators, Steve Rubell, and Ian Schrager. Rubell died in 1989, so the film uses Ian Schrager to tell the story, along with news reports and the tons and tons of pictures taken of celebrities that used to go to be seen. It’s a fascinating look at a club that we will never see the likes of again.   My Rating: Bargain Matinee     Studio 54 Website

Forgotten Film:  The Escapist  (2008)  Frank Perry (Brian Cox) is in prison for life without parole. When his daughter falls ill, he conceives a plan to ingenious plan to break out of prison. This small film by Rupert Wyatt was little seen at the time of its release but is worth viewing, especially for the lead, Brian Cox. The plot has a bunch of twists that you won’t see coming and has an outstanding cast including Damian Lewis, Joseph Fiennes, and Dominic Cooper.    My Rating:  Full Price   The Escapist Info

Weird Credits:  From the credits of Hunter Killer:  Crowd Marshall

Coming Soon to a Theatre Near You:  Boy Erased  (2018)  R  The son (Lucas Hedges) of a Baptist preacher is forced to participate in a church-sponsored gay conversion after being forcibly outed by his parents (Russel Crowe, Nicole Kidman). This is one of the most talked about films coming out in time for Oscar nominations.   Boy Erased Website 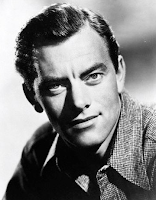