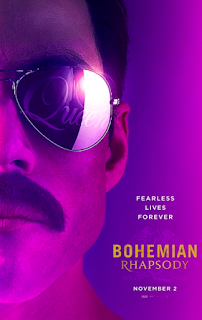 My View:  Bohemian Rhapsody  (2018)  PG-13  Story of one of the world’s greatest rock bands, Queen, led by their flamboyant lead singer Freddie Mercury (Rami Malek). I loved the concert scenes, especially the last 20 minutes which is from their legendary 1985 Live Aid appearance. This is probably the best I’ve seen in a film of four actors playing instruments, all for play with skill and conviction. I really enjoyed the first half of the film; it’s fun to see how they were formed and how they came up with their unique sound. What I didn’t like about the movie is that they mess with the timeline. For example, Freddy was diagnosed with Aids in 1987, but in the film he is diagnosed in 1985 before Live Aid, making that concert appearance more meaningful. I didn’t like how the made Freddy the party boy, and the other three members of the band come off like perfect husbands and fathers. I found that I didn’t enjoy the 2nd have of the film (except for that ending) when Freddie starts acting like a diva and breaks up the band. The 2nd half seems very long and isn’t much fun to watch. Unlike the rumors that were circulating this year, it does deal with Freddie being gay, but it’s pretty sanitized. If you are a fan of Queen like I am, you will enjoy the film, but you probably won’t think its a great movie, but you will enjoy the concert scenes.  My Rating: Bargain Matinee    Bohemia Rhapsody Website

Family Faire:   The Nutcracker and the Four Realms  (2018)  PG  Clara (Mackenzie Foy) is on a search for a key that will open a box her late mother gave her. When Clara searches for the key, the trail takes her to a magical, mysterious parallel world. I was surprised by how much I enjoyed this film. The art direction, costumes, and hair design are fantastic in this film. The storyline moves along at a great pace and is fun to watch. It takes the basis of the Nutcracker story and makes it its own original story. There is an ode to the Nutcracker ballet with a fantasy sequence where some of the famous dance is performed. I immensely enjoyed the performance of Mackenzie Foy who plays Clara, the girl trying to find the key to open up her dead mother’s gift.   My Rating: Full Price   The Nutcracker and the Four Realms Website

Indiefest:   Suspiria  (2018) R    A promising young dancer, Susie (Dakota Johnson) joins a world-renowned dance company. Susie soon learns that mysterious things are happening at the company and dancers have gone missing. This is a bizarre, weird, sometimes violent film that has plenty of nudity and a couple of extremely violent scenes, one early on in the film that is really hard to watch. There is quite a bit of modern dancing in this film, much more than in the original 1977 Suspiria. The film feels every bit of its 2 hours and twenty-minute length. This is very different than director Luca Guadagnino’s 2017 film Call Me By Your Name. There is a subplot about a highjacked plane that I don’t have any clue why it's in the film. The director tries to get too cute with strange camera angles, slow-motion scenes that don’t work and an ending that is very creepy. This is a horror movie that just isn’t scary. I did not enjoy this film, and I plan on never seeing it again.   My Rating: You Would Have to Pay Me to See it Again     Suspiria Website

My View:   Can You Ever Forgive Me?  (2018)  R    Lee Israel (Melissa McCarthy) has made her living writing about celebrities. When she falls out of style and can’t get published, she begins to forges letters from deceased authors and playwrights. Melissa McCarthy gives a stunning performance of someone who is utterly unlikeable. In fact both her character and her best friend, Jack (played superbly by Richard E. Grant), a gay man who doesn’t seem to have a job or a home, are horrible people. McCarthy’s character thinks that she is the greatest writer in the world and that nobody realizes that. It makes Lee bitter and angry at the world. Jack gets by on his looks, which are rapidly fading as he ages, and by selling cocaine. The film is entertaining to watch as we wait for when it will all fall apart for Lee. You are not going to like these characters, but you are going to love the film and its performances.    My Rating: Full Price    Can You Ever Forgive Me? Website

Forgotten Film: Mary and Max  (2009)  This film is done in claymation, but it’s not for kids. It’s the tale of a 20-year friendship between two unlikely pen pals: Mary (voiced by Toni Collette) a lonely 8-year old girl from Australia and Max (voiced by Philip Seymour Hoffman), an obese, 44-year old New Yorker with Asperger Syndrome. It’s a beautiful story about friendship that is funny at times but can also be melancholy as it deals with topics like depression and isolation. This is a lovely film that will make you think and maybe shed a tear or two.  My Rating: Full Price   Mary and Max Info

Weird Credits:  From the credits of The Nutcracker and the Four Realms: Hair Technician

Coming Soon to a Theatre Near You:  Creed II  (2018)  With Rocky’s help, newly crowned light heavyweight champion Adonis Creed (Michael B. Jordan) faces off against Viktor Drago (Florian Munteanu), the son of the man that killed Adonis’ father. I loved the first film, so I am hopeful that this will be good. I am a little worried because the writer/director of the first Creed film, Ryan Coogler, is not involved with this film.   Creed II Website

Email ThisBlogThis!Share to TwitterShare to FacebookShare to Pinterest
Labels: Bohemian Rhapsody, Can You Every Forgive Me?, Creed II, Melissa McCarthy, Queen, Suspiria, The Nutcracker and the Four Realms