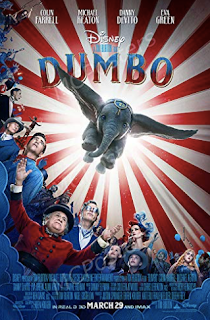 My View:  Dumbo  (2019)  PG  A retelling of the timeless story of the baby elephant that has ears so big he can fly. I have liked the recent films of Tim Burton. While the film isn’t bad, it’s not great. I don’t know who this movie is for. The first half of the film is definitely aimed at kids but when the villain of the story, V.A. Vandevere (Michael Keaton) shows up, the film goes really dark. Vandevere owns Disney like park called Dreamland and recruits the owner of a small circus, Max Medici (Danny DeVito) to bring his circus and his flying baby elephant to Dreamland. The is probably Michael Keaton’s worst performance of his career. I have no idea what he was trying for, but Keaton is way over the top and it does not work. Other than two kids (Nico Parker, Finley Hobbins) there isn’t a likable character in the film, including the kid’s father, Hoit (Colin Farrell), a wounded soldier coming back from WW I. The CGI mostly works but there are a couple of flying sequences that don’t look quite right. Fans of the classic Dumbo film may be upset by how much different this film looks and feels. A fellow film critic, FanBolt’s Emma Loggins, hated this film and found it creepy. A bit of warning, young kids may get scared a couple of times when Dumbo is flying around.  My Rating: Bargain Matinee     Dumbo Website

My View:  The Aftermath  (2019) R  A few months after WW II has ended, Rachael (Keira Knightly) joins her husband, (James Clarke) who is still in the British army, in Hamburg, Germany. They stay at a German’s (Alexander Skarsgard) home who is still grieving for his wife that died in an Allied bombing. With a tired plot and no chemistry from Keira Knightley and her two love interests, this film never gets off the ground. I was really glad when the film ended because the dialogue was hurting my ears it was so bad. And this film has an ending that is just plain stupid. There is more believable romance in Us, a horror film, than this film.    My Rating: Cable   The Aftermath Website

Indiefest:  Hotel Mumbai (2018)  R  The film recalls 2008 siege of the famed Taj Hotel by a group of terrorists in Mumbai. A chef (Anupam Kher) and a waiter (Dev Patel) risk their lives to protect their guests. This taut thriller will have you on the edge of your seat. The film does a great job of letting you get to know the main guests and staff, so we start rooting for them as soon as the attacks start. The action (and there is quite of bit of it) is well done, The tension builds throughout the film and after seeing this film I can guarantee that you will be drained by the emotion tugs this film creates. You will also admire the courage of the staff, most of which stayed to protect their guests. It’s a film the shows the brutality of man but also the goodness of people helping people in a deadly situation.   My Rating: Full Price   Hotel Mubai Website

Indiefest:  Ash is Purest White  (2018)  The story of the rise and fall of the love between a small time local hood named Bin (Fan Liao) and his lover, Qiao (Tao Zhan). So, let me tell you, the director, Ahangke Jia, loves to do long takes and has his actor pause for long times before replying to another character. The film centers on Qiso, played by the amazing Tao Zhan, who is headstrong and willing to do anything for her man. We go on a journey with Oiao that lasts 20 years as Bin comes in and out of her life. Zhan is a remarkable actress and Jia uses her talents to the utmost. This is a long, slow film that is worth seeing because of the performances of the two leads.  My Rating:  Full Price      Ash is Purest White Website

Forgotten Film:  Dave  (1993)  PG-13  Dave (Kevin Kline) is an ordinary guy who just happens to look exactly like the President of the United States. When the President wants to spend time with his mistress, Dave is recruited by the White House to fill and be seen. The problem is that while the real President is with his mistress, he has a stroke, making Dave’s impersonation of the President permanent. This is a funny and smart film which puts its main character is really funny and sometimes touching situations. The film has an outstanding cast with Sigourney Weaver as the First Lady, Frank Langella as the chief of staff, and great actors like Ving Rhames, Ben Kingsley, and Charles Grodin. Kline is hilarious in the role and so much fun to watch.  My Rating: Full Price

Weird Credits:  From the credits of Dumbo:  Drapes Master

Coming Soon to a Theatre Near You:  Amazing Grace  (2018)  G  Documentary showing Aretha Franklin backed up by a choir giving a concert at a Baptist church in Los Angeles in 1972. This is going to be amazing!     Amazing Grace Website