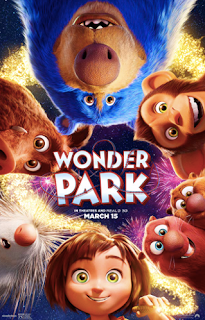 Family Faire:  Wonder Park  (2019)  PG  June (Brianna Denski) and her mom (Jennifer Garner) using their imagination have created an amusement park named Wonder Park in June's room. June’s mom has gotten sick and has to go out of town to get treatment. June discovers the amusement park of her dreams is really out there and is under attack. Parents will enjoy the message of believing in yourself and kids will love the action and the fun storyline. June is helped by a bear that faints when pressured, two beavers that are eager to help but kind of dense and a bunch of other animals that all battle a group of zombie dolls who are trying to destroy the park. I was pleasantly surprised by this warm and joyous film. My Rating: Full Price   Wonder Park Website

My View:  Five Feet Apart  (2019)  PG-13  Two teenagers (Haley Lu Richardson, Cole Sprouse) with life-threating illnesses meet in the hospital and fall in love, despite the fact that they have to stay at least five feet away from each other. I agree with a fellow critic who said after the screening that this just might be Haley Lu’s break out movie. She is brilliant in the role of the girl with cystic fibrosis who is trying to do everything she can to keep living. Cole Sprouse is good in the role of the rebellious patient who becomes interested in Haley Lu’s character. This isn’t a great film, but it delivers what you want in this genre with all the tugs at the heartstrings. I was happy that there a couple of twists I didn’t see coming. I have trouble with a couple of the plot points but there aren’t too troubling and don’t really interfere with the storyline. If you like a romance with a few tears then this film is for you.  My Rating: Bargain Matinee    Five Feet Apart Website

Indiefest:  Finding Steve McQueen  (2019)  R  Henry (Travis Fimmel) has been keeping a secret for eight years; in 1972, Henry and his gang of close-knit thieves from Ohio attempted to steal thirty million dollars from President Richard Nixon’s  Illegal re-election campaign funds. Man, this is a fun movie to watch. Henry, eight years after the robbery is telling his girlfriend, Molly (Rachael Taylor) the story that he has been hiding from her. At first, she doesn’t believe what he is telling her, that he used to steal muscle cars, run from the police and got involved with a small-time mob boss who planned a bank heist to steal 30 million dollars. A French horn playing FBI agent (Forest Whitaker) is trying to catch the gang who almost pull off the perfect crime, except for one mistake might bring them down. Full of humor and a couple of really cool car chases, Finding Steve McQueen is a highly enjoyable and smart film.    My Rating: Full Price    Finding Steve McQueen Info

Indiefest:  Mapplethorpe  (2018)  R  A look at the life of controversial photographer Robert Mapplethorpe (Matt Smith) from his rise in the 1970s art world to his untimely death in 1989. Mapplethorpe was an artist who specialized in large format, highly stylized B&W photographs. Mapplethorpe took all types of photos, from celebrity portraits, nudes, and pictures of flowers but he is best known for his pictures of the BDSM world in NYC. Some of his pictures were so controversial that some galleries refused to show his work scared of public opinion and possible loss of funding. The film shows Mapplethorpe early life with iconic punk singer Patty Smith. Mapplethorpe was bi-sexual, though in his later life he mostly slept with men. I really like the first third of this film. I especially enjoyed the performance of Marianne Rendon who plays Patti Smith, a woman who supported Mapplethorpe but couldn’t ultimately put up with his cheating ways. The film starts to drag once the Patti Smith character leaves the picture, as Mapplethorpe starting finding success. The last third of the film bogs down almost to a stop as Mapplethorpe slowly dies from AIDS. Matt Smith is excellent in the role, but he can’t overcome the script that just doesn’t have any pacing. A bit of a warning, as you can imagine, there is quite a bit of nudity and the film shows a ton of his pictures, some may find offensive.   My Rating:: Cable    Mapplethorpe Website

Forgotten Film:  The Passenger (1975)  PG-13    Locke (Jack Nicholson) is a reporter who is trying to interview a guerrilla leader fighting a war in Africa. Unable to find the leader, he meets a mysterious man at a hotel. When Locke discovers the mysterious man dead in his hotel room, he decides to take the dead man’s identity. It turns out the dead man was a gun runner and was selling guns to the guerrillas. This is a strange movie about losing your identity. The film’s plot isn’t as important as the look and tone of the film. The reason to see this film is the performance of Maria Schneider, who gives a dazzling performance as a woman who gets involved with Nicholson's character, eventually becoming his lover. This is definitely a movie that values style over substance.    My Rating: Bargain Matinee   The Passenger Info

Weird Credits:  From the credits of Mapplethorpe:  Instrument Designer

Coming Soon to a Theatre Near You:  Dumbo  (2019)  PG  Retelling of the classic story of the little elephant with the giant ears that can fly. Tim Burton brings us a live-action movie with an incredible cast. Eva Green, Colin Farrell, Michael Keaton, Danny DeVito, and Alan Arkin are just some of the stars of the film. I’m not a big Tim Burton film but the trailer looks amazing, and it’s getting great word of mouth from critics who saw it at SXSW.    Dubo Website 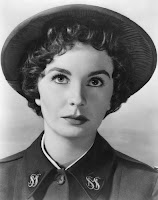