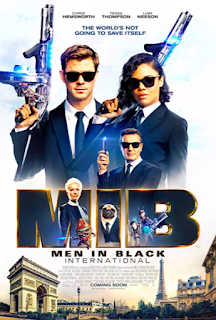 My View:  Men in Black: International  (2019)  PG-13  Agent M (Tessa Thompson) has just joined the Men in Black to protect Earth from the scum of the universe. Teamed up with Agent H (Chris Hemsworth), Agent M learns something thought impossible, there is a mole inside the MIB organization and she and Agent H must find the mole or the Earth is doomed. I was very disappointed in this film that wasted the comedic talents of Chris Hemsworth. The film is dull and seems much longer than its almost two hour run time. The only redeeming quality of this film is the character of Pawny (voiced by Kumail Nanjiani), a small little creature who becomes the sidekick to Agent M. Pawny is hilarious, always voicing his opinion on everything. For most of the film, I was bored and the action sequences aren’t well done.    My Rating: Cable    MIB: International Website

My View:  Late Night  (2019)  R  Molly (Mindy Kaling) is a quality control worker at a chemical plant that dreams of working as a writer on a late night talk show. Due to being in the right spot at the right time, Molly gets a job on the writing staff of a talk show hosted by the legendary Katherine Newbury (Emma Thompson). Katharine is about to lose her job and it is up to Molly to save it. Absolutely brilliant writing from Mindy Kaling. The film is filled with witty dialogue and Kaling kills it on the screen as the writer desperate to succeed. Emma Thompson is a delight as the embattled talk show host that slowly warms up to Kaling’s character and her ideas to improve the show. This was such a fun film to watch and I enjoyed it immensely.    My Rating: I Would Pay to See it Again   Late Night Website 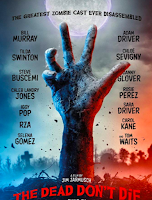 Indiefest:  The Dead Don’t Die  (2019)  R  The small, peaceful town of Centerville is suddenly turned into a killing zone as a horde of zombies invades the town. Now it’s up to its Police Chief (Bill Murray) and his deputies (Adam Driver, Chloe Sevigny) to save the town with a little help of the new funeral home director (Tilda Swinton). How writer/director Jim Jarmusch swung and missed with such a great cast is a mystery. The film has its moments, mostly due to Bill Murray but the film never finds its tone or footing and just isn’t funny enough to be called a comedy. Also, while funny, the film breaks the fourth wall which takes you out of the movie, almost grinding the film to a halt. The film had such promise but never delivers, making it a great disappointment.    My Rating: Cable   The Dead Don't Die Website

Indiefest:  The Last Black Man in San Francisco  (2019)  R  Two best friends (Jimmie Falls, Jonathan Majors) try to decide if they stay in their hometown of San Francisco which has drastically changed since their childhood. This is a wonderful film about the importance of friendship and how inter-cites landscapes are changing, not always for the best. This is also a love letter to the city of San Franciso, a city that director Joe Talbot and his lead actor Jimmie Fails absolutely adore. I loved the chemistry between Fails and Majors, who work well with each other on the screen. In a climate where a bunch of blockbuster films are duds, this small film deserves to be seen and treasured.   My Rating:  Full Price   The Last Black Man in San Fransisco Facebook Page

My View:  Shaft  (2019)  R   After his best friend mysteriously dies, john Shat Jr. (Jessie T. Usher) enlists the help of his father (Samuel L. Jackson) and his grandfather (Richard Roundtree) to find out what happened. This film just can’t figure out what it is: is it a buddy film? A gritty action film? A comedy? The only thing this movie knows what it is, a vehicle for Samuel L. Jackson to say as many F-bombs as he can. Some of the dialogue is downright laughable and the villains are so cut and dried that they could be from a 70s TV crime drama and the plot has holes as big as the muscle car that Shaft drives. I will say this, the small audience that I saw the film with laughed at all the jokes that Jackson made but that might be some hometown cooking (Jackson lives in Atlanta).   My Rating: Cable   Shaft Website

Forgotten Film:  Ryan’s Daughter  (1970)  PG  During the 1916 IRA rebellion a British officer (Christopher Jones) has a torrid affair with a married woman (Sarah Miles. Two reasons to see this movie; the performance of Robert Mitchum who is terrific and a storm sequence that is spectacular. The movie lacks some of the drama that director David Lean’s earlier movies such as The Bridge on the River Kwai (1957) or Doctor Zhivago (1965) but is still worth watching.    My Rating:  Bargain Matinee    Ryan's Daughter Info

Weird Credits:  From the credits of Men In Black: International:  Crowd Hair Junior

Coming Soon to a Theatre Near You:  Yesterday  (2019)  PG-13  A musician (Himesh Patel) realizes he’s the only person to remember The Beatles. He then starts performing their songs and becomes a big star. The film is directed by Danny Boyle (Slumdog Millionaire, 127 Hours) so I have high hopes for this film.    Yesterday Website 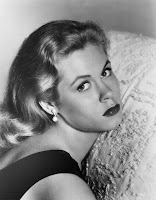