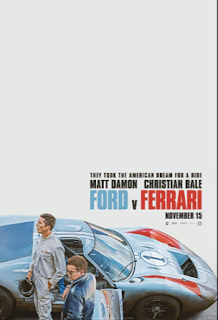 My View:  Ford v Ferrari (2019) PG-13   Legendary American car designer Carroll Shelby (Matt Damon) is hired by the Ford Motor Company to create a race car that can take on the seemingly to defeat Ferrari racing team at the 24 Hours of Le Mans. Against Ford’s wishes, he hires the brash and outspoken driver Ken Miles (Christian Bale) to drive the car. Can Shelby manage Mlle’s temper long enough to win the race? One of the best films of the year and maybe the finest racing film of all time. The plot is expertly laid out with the two leads at the top of their game, and the racing sequences are thrilling to watch. At no time does this film feel like a movie that is over two and a half hours in length. I loved the relationship that Miles has with both his wife (played by Caitriona Balfe) and his son (Noah Jupe), making Miles a man that you can root for from the start. Damon, as the brash and bold Shelby, holds his own with Cable on the screen, and their fight scene, while Miles’s wife looks on from a lawn chair in the front yard, is one of the highlights of the movie. Even if you aren’t a racing fan, you will love this film for its deep and complex characters and their ever-evolving relationships.   My Rating: I Would Pay to See it Again   Ford v Ferrari Website

My View: The Irishman (2019) R   The story of Frank “The Irishman’ Sheeran (Robert De Niro) who went from a truck driving WWII vet to the right-hand man of the Bufalino crime family. Sheeran’s claim in the later years was that he was the hitman that killed his long-time friend Jimmy Hoffa (Al Pacino), the former president of the International Brotherhood of Teamsters, who mysteriously vanished in 1975. Director Martin Scorsese brings us another gem of a film. This isn’t a film that glamorizes the mob life like The Godfather, Goodfellas or Casino. This is a movie about the dark, bloody life of a man who, through good luck and bravado, makes it to be the right-hand man of a mob boss and a close friend of one of the most powerful men in the country in Teamsters boss Hoffa. Much has been made of the CGI effects used to ‘de-age’ De Niro and Joe Pesci (playing mob boss Russell Bufalino) for a good third of the film, but you very quickly accept it, and it never interferes with the flow of the movie. The performances in this film are just draw-dropping good, and while the film is three and a half hours long, you never notice or feel the length of the movie. I can’t stress how powerful and sometimes moving this film is. Note that while this film is based loosely on real events, don’t believe everything you see actually happened, especially with the death of Hoffa. I think we can allow a master filmmaker like Scorsese to have a little fun with history to create a film that is an instant classic in the making.   My Rating: I Would Pay to See it Again    The Irishman Website

My View: Charlie’s Angels (2019) PG-13   A systems engineer, Elena (Naomi Scott), joins Jane (Ella Balinska) and Sabina (Kristen Stewart) to work for the mysterious Charles Townsend. The Townsend Agency is guided by multiple Bosleys (Elizabeth Banks, Patrick Stewart, Djimon Hounsou) to stop the world’s mastermind criminals. Can we please stop making films about crappy TV series from the past? The film is a bloated mess of a movie that has plot twists that you see almost from the start of the movie. Other than Patrick Stewart (who chews up scenery like he hasn’t acted in ten years), Kristen Stewart looks like the only actor in this cast that is having a good time making this film. Djimon Hounsou is absolutely wasted in a small role, and Elizabeth Banks acts like she is in a bad 70s cop show, which is what this film is based on. The film is summed up by a dance sequence near the end of the film that Balinska and Stewart join in on, somehow knowing all the intricate dance moves that contribute nothing to this film but making the running time pad out to almost two hours. If Charlie calls, don’t answer the phone. If you make it to the end, there are bonus scenes during the credits, which a bunch of cameos.   My Rating: Cable    Charlie's Angels Website

My View: The Good Liar (2019) R   Career con artist Roy Courtnay (Ian McKellen) meets wealthy widow Betty McLeish (Helen Mirren) in an online dating service, and he can’t believe his luck. He begins a courtship with the intent of milking her dry, but he never thought for a moment that he would start to have feelings for her. The performances of McKellen and Mirren can’t overcome a weak plot whose major twist is seen almost from the start of the film. I wish that director Bill Condon and screenwriter Jeffrey Hatcher gave us a much more vibrant and complex plot, but the film finds its self in a corner at the end of the movie that it quite can’t get out of. I hate it when films let down the actors, especially ones of this talent, but The Good Liar can’t overcome its attempt to fool us.   My Rating: Bargain Matinee    The Good Liar Movie

Indiefest: The Warrior Queen of Jhansi (2019) R  Rani Lakshmibai (Devika Bhise) must rise up and lead her people to take on the formidable British East India Company when it threatens her family and her country with expansion. I saw the trailer of this film and thought it might be a cool film to check out, a warrior queen who leads a group of women warriors to take on the mighty British empire. Unfortunately, this film feels like a poorly made TV docudrama, with long periods of people discussing how to put down the rebellion. The action sequences are too far, and few between and aren’t very exciting. The left me wanting more of this story, never quite delivering what it promised.  My Rating: Cable    The Warrior Queen of Jhansi Website

Indiefest: Frankie (2019) PG-13   Three generations deal with life-changing experiences during one day on vacation in Sintra, Portugal, a historic town known for its water that heals. I enjoyed the performances in this film, especially Isabelle Huppert, who plays the title role, a world-famous actress and the matriarch of the family, and Marisa Tomei, a friend of Frankie who has come to spend time with Frankie and her family. This is a film that is all about conversations between a lot of miserable people. There are a few really touching moments, especially between Brendan Gleeson, who plays Frankie’s devoted and loving husband, and Huppert, a woman who wants to plan out everything in her life and usually gets her way. Spend the day in the beautiful countryside, getting to know this strange and troubled family.   My Rating: Bargain Matinee    Frankie Website

Indiefest:  Light from Light (2019) A single mom and part-time paranormal investigator, Shelia (Marin Ireland), is asked to look into a possible ‘haunting’ at a widower’s (Jim Gaffigan) home. I really enjoyed this small, quiet film about a mother and son, Owen(Josh Wiggins). While the paranormal aspect of the film is part of the story, the heart of the film is how the mother, son, and the widower are dealing with loss. Marin Ireland gives a multi-layered performance of a mom who may have the gift of being able to contact ghosts but is more concerned about how the widower is dealing with the loss of his wife. Josh Wiggins gives a winning performance as the son who is slow to develop his friendship with Lucy (Atheena Frizzell), a fellow student who shows all the signs that she wants to be more than friends with Owen. Jim Gaffigan gives a moving and restrained performance as the grieving widow who wants to know if his wife really is a ghost in his house or is it all in his imagination. This is a film that I savored every moment it was on the screen and loved getting to know the characters in the movie, pleased in the end how everything turned out.   My RatingRating: Full Price    Light from Light Website

Forgotten Film:  Eureka (1983) R   In the 20s, a prospector, Jack McCann (Gene Hackman), finds a gold mine through mysterious ways. He becomes the richest man in the world, but money can’t always buy happiness. Boasting an all-star cast that includes Theresa Russell, Rutger Hauer, Mickey Rourke, and Joe Pesci, this film is a wild ride of a movie that is part reality and part fantasy. Your job as a viewer is to figure out which part is real and which is fantasy. Hackman is fantastic as the role of a man whose life hasn’t turned out the way he wanted it to, and Theresa Russell is brilliant as his troubled daughter who has fallen for the wrong man (Hauer). This isn’t a great film, but man is it fun to watch Hackman just go nuts with the role.    My View: Bargain Matinee    Eureka Info

Weird Credits: From the credits of Charlie’s Angels: Chaperon: Turkey

Coming Soon to a Theatre Near You: Jumanji: The Next Level (2019) PG-13 The gang (Dwayne Johnson, Jack Black, Kevin Hart, Karen Gillan) is back, and this time it’s a rescue mission. In order to escape the most dangerous game, they will have to go into an unknown country full of arid deserts and snowy mountains. The first film was an unexpected pleasure, so let's hope two times a charm.    Jumanji: The Next Level Website