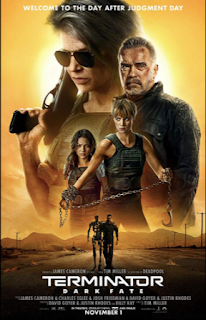 My View:  Terminator: Dark Fate (2019) R    Two decades after Sarah Connor (Linda Hamilton) saved humanity from Judgement Day, she must again take on a Terminator, this time a new Terminator called the Rev-9 (Gabriel Luna). Sarah, with the help of an enhanced super-soldier from the future named Grace (Mackenzie Davis), must keep a young woman named Dani (Natalia Reyes) safe. I really enjoyed this film as it picks up where Terminator II left off (forget all those other Terminator movies, in this cinema world, those don’t exist). I thought the film did a great job of incorporating Sarah into the story, as the feisty but damaged Connor fights to right the wrongs of the past. Mackenzie Davis brings a spark to the film as the soldier from the future who has been sent to save Dani at any cost. The action scenes are brilliant, and yes, a certain Terminator comes back to help the gang keep Dani safe (no spoiler here as Arnold is in the trailer and is featured prominently on the movie poster). If you enjoyed the first two films, you will have a great time with this film.    My Rating: Full Price    Terminator: Dark Fate Website

My View: Harriet (2019) PG-13   The story of Harriet Tubman (Cynthia Erivo), who went from escaping from slavery to becoming one of the forces that transported slaves to freedom using the Underground Railroad. I wish this was a better movie, but it feels like it’s a made for TV movie from 1985. If you are to believe this film, Harriet did most of her contact with her family and friends during the daytime, out in the open, even though she was a highly wanted person. The film wants us to know that when Harriet escaped from her plantation and made it to safety, it was an impossible trek that no woman alone had ever done. The problem is we see about five minutes of this journey, and we never get the feel of just how amazing this escape was. I found the film boring at times as there is a lot of debate on whether Harriet can go back to save her family. The film is not helped by a musical score that seems so out of place for most of the movie. I just wish this had been a more exciting and engaging look at a historical figure that we all need to know more about to truly appreciate all that she did.   My Rating: Cable   Harriet Website

Indiefest:  Motherless Brooklyn (2019) R   Set in 1950s New York, a private detective named Lionel (Edward Norton), afflicted with Tourette’s Syndrome, sets out to solve the murder of his friend and mentor, Frank Minna (Bruce Willis). I am sure that a lot of critics are going to bring up the 1974 Oscar-winning film Chinatown, starring Jack Nicholson and Faye Dunaway since the plot of that film and this one are similar with a detective in each film trying to piece a mystery together while everyone else is telling him to drop the case. The similarities end there with Norton’s portrayal of Lionel, a detective who has Tourette’s Syndrome, a condition that hampers both his ability to investigate without attracting attention and picking up women. My favorite scene is when Lionel goes into a bar to ask a few questions. A good-looking woman comes up and starts to flirt with Lionel, pulling out a cigarette and asking a light. Lionel keeps lighting a match, and then before she can light her cigarette, he blows it out, causing the woman to walk away. I enjoyed this film, which Norton both wrote and directed, and it is evident that he loves the style and look of the detective films of the 40s and 50s. The film does get bogged down a bit in a very complicated plot and slows a little too much in the middle of the film. Regardless  I still enjoyed Norton’s performance and his directorial effort to give us a modern-day ‘film noir.’   My Rating: Bargain Matinee     Motherless Brooklyn Website

Indiefest: Pain and Glory (2019) R   A famous film director (Antonio Banderas) must confront both his past and present as a film festival wants to celebrate the movie that made his career. Antonio Banderas gives a tour de force performance, one that surely will get him an Academy Award nomination. Banderas is perfect in the role of a man who, because of pain, both physical and emotional, can’t find a way to live his life. This is a vibrant and compelling movie about talent wasted and the stupid mistakes that we make when we think we are better than the rest of the world. I loved the flashbacks to his younger life, living with a mother (played by Penelope Cruz) who is continually being let down by her husband. What I loved about this film is that Banderas's character slowly makes discoveries about his life (both present and past) that help him become a better man.   My Rating: Full Price    Pain and Glory Website

Indiefest: JoJo Rabbit (2019) PG-13   A young boy, Jojo (Roman Griffin Davis), wants to be in Hitler’s army at age ten and finds out that his mother is hiding a Jewish girl (Thomasin McKenzie) in their home. So, you got to love a film where the kid in the story’s imaginary friend is Adolf Hitler (played by director/writer Taika Waititi). Taking in the place the last years of the war, JoJo, who is only ten, is desperate to go fight on the battlefield. Unfortunately, his mother (Scarlett Johansson) thinks better of JoJo’s plan and keeps him nearby. This film is full of humor, a great deal brought on by imaginary Adolf, who constantly gives advice to the boy (most of it nothing to do with Jojo) and offers JoJo cigarettes. The film is about prejudices and how propaganda can cloud your vision of the world. Griffin Davis is a delight as the young Nazi wannabe, and he has excellent chemistry with both Johansson and McKenzie. Sam Rockwell, as a failed army officer, is hilarious, and Stephen Merchant gives a tremendous short appearance as a SS agent looking for Jews. The audience I saw this film thoroughly enjoyed the movie and so did I.  My Rating: Full Price    JoJo Rabbit Website

Indiefest: Where’s My Roy Cohn? (2019) PG-13   Documentary on controversial lawyer Roy M. Cohn, who grew to prominence as Communist hunter Joseph McCarthy’s right-hand man in the 1950s to a trusted advisor to the rich and powerful, including Donald Trump. Roy Cohn was a bad and dishonest man who reveled in aligning himself with the rich and powerful, no matter if they were guilty or murderers. The film takes a hard look at Cohn and how, even after he was disbarred, he continued to manipulate the legal system to his and his client's financial gain. The film shows Cohn warts and all, including the last years of his life, when he refused to publicly come out as gay and HIV positive. This is a fascinating film about a man who trail-blazed the way for Donald Trump and the political landscape that we live in today.   My Rating: Full Price      Where is My Roy Cohn? Website

Indiefest: Greener Grass (2019)   Life is hard in suburban America. Soccer moms are always competing against each other for ‘best mom’ as their kids settle their differences on the soccer pitch. Families are judged by how fancy their golf carts are, how their lawns appear, and it’s all the while a serial killer is on the loose in their neighborhood. Just a fair warning that this film is a wild, crazy ride where serial killers try to get noticed but don’t, mothers give away their children on a whim and where it’s more important how you look than if you are happy. The film is nuts, and we see that at a lawn party where two great their wives with kisses and then they all realize that they have kissed the wrong wife. Sometimes the jokes don’t quite work, and the film goes on just a little too long, but it’s still fun to hop on a golf cart and ride down the street with this bizarre community.   My Rating: Bargain Matinee     Greener Grass Website

Forgotten Film: The Last of Sheila (1973)   A millionaire’s wife is killed in a hit and run accident. A year later, he invites friends and family to his yacht in France for a week of fun and parties. The millionaire (James Coburn) knows that the murderer is on the yacht and starts a very complicated game of mystery that his guests must solve. What the guests don’t know is that the millionaire plans on exposing not just the murderer but also all his guest's secrets that they have so carefully hidden in their lives. This is a mystery in the style of Agatha Christie, and it is a blast to watch as the guests slowly realize that they are being played. Like a Christie mystery, there is a great plot turn around the middle of the film, and we, as the audience, have to figure out what happened. If you like mysteries, then this is a film for you.    My Rating: Full Price    The Last of Shelia Info

Coming Soon to a Theatre Near You: Frozen II (2019) PG   Anna (Kristen Bell), Elsa (Idina Menzel), Kristoff (Jonathan Groff), Olaf (Josh Gad), and Sven leave Arendelle to find the origin of Elsa’s powers to save the kingdom. When I walked out of the screening of the first Frozen I told the rep, Disney has a massive hit in ‘Let it Go!” Let’s hope this one has one too.     Frozen II Website 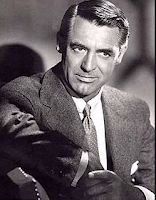